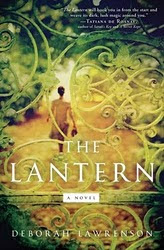 Sometimes a single word can generate so many thoughts and memories that it becomes reverie. The Lantern, a novel by Deborah Lawrenson is filled with such words, taking the reader on a delightful voyage through an intimate weaving of sights and smells with dark mysteries present and past. Lawrenson’s time-shifting tapestry centers on an old farmhouse in Provence and envelopes the reader in “an olfactory elegy to life in the French countryside”.

The story unfolds along two interspersed tracks. The first concerns the whirlwind romance between a young translator called Eve, and Dom, an older man of worldly sophistication. The couple begin their new life together with the renovation of a country estate in the sunny south of France – the type of rambling, eccentric stone maison rurale that makes tourists swoon. The second thread features the mystical story of Bénédicte, a resident from the property’s murky past, whose experiences offer chilling parallels to the present day owners. As Eve begins to suspect Dom of a secret and sordid past, her story begins to meld with the plight of Bénédicte, and their kindred spirits become entwined. Meanwhile, there is another, more recent ghost that haunts this couple, and the secrets locked deep within this phantom will determine Eve’s ultimate fate.
Lawrenson’s vivid descriptions of the past transport the reader from this sterile techno age to a misty era smoldering with intrigue. Clues, often delivered as vibrant descriptions of smells or sounds, will lead the reader to feel the mystery is on the verge of solution, only to turn the page and find The Lantern’s narrative labyrinth twisting ever deeper. This gifted writer has the ability to transport her readers to the darkening edges of another time with a wonderful verbal economy, and then return to the budding lavender of present day Provence with an immediacy that contrasts the sensory overload bourn by the living with the wispy memories of the long dead.

With The Lantern, Deborah Lawrenson manages to combine the sensual dreaminess found in the best travel writing with the gothic churning of cleverly plotted romantic thrillers. Her melding of genres leads to a three dimensional sense of time-and-place, and a book that educates and evokes while it briskly entertains. Lawrenson transports her readers to lush worlds of romance, pathos and century-old enigmas. Yet, along the way, she gives her readers plenty of time to stop and smell the roses.
at August 22, 2011