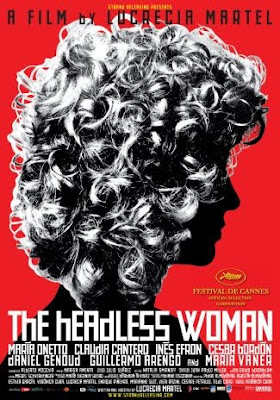 Way back in the 20th Century, the Headless Woman was a staple of traveling carnival freak shows, right along side the Bearded Lady and the Snake Boy. Lucretia Martel uses this metaphor to profoundly disturbing effect in her latest film The Headless Woman. A middle-class dentist (Maria Onetto), who has recently dyed her hair blond, is driving down a country road after attending a cosmetics party. While fumbling for her ringing cell phone, her car suddenly suffers a violent jolt and her heart races into her throat.

The visual evidence indicates she has struck a dog…but Onetto’s reaction indicates that there is more afoot, and it’s our first clue that our perceptions are being slyly manipulated. In the accident’s aftermath, Onetto appears to be stricken with a sort of post-traumatic amnesia, and spends the next few days drifting through the normal routine of her life, a routine that’s familiar to everyone but her. The film begins to drift as well, down a number of thematic tributaries and all of them tantalizingly open to interpretation. Martel presents the sexes in a sharp polarity of traditional roles – women are obsessed with physical appearance and men talk only of hunting and fishing – the only exception being Onetto’s sexually aggressive lesbian cousin, recovering from hepatitis and locked away like a family embarrassment. 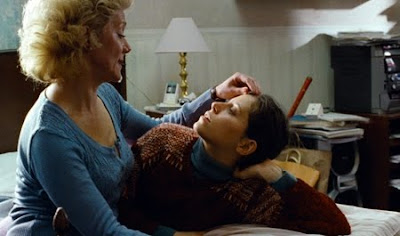 Onetto’s husband, who is first seen placing a dead deer in the kitchen sink, seems to be much more concerned about her car than any potential injury, while her domestic help manage to keep the confused Onetto on track with appointments and other obligations. It eventually becomes clear that Martel’s metaphorical canvas has expanded to include not only class and gender struggle, but specific allusions to the tortured political history of her native Argentina as well. Martel hints that Onetto’s disorientation may stem from a mixture of guilt and denial, and the surprising resolution of her affliction reinforces the idea that, for Argentina’s elite, justice is a malleable concept. Onetto does a fine job in her role, and her withdrawal from reality is both convincing and mysterious, yet leaves lots of room for her fellow actors. Although she is in nearly every scene, she seems to partially dematerialize before our eyes. While Headless Woman features none of the witty observations of her earlier films, here Lucretia Martel has created a deeper work that is involving and rewarding. It’s also uncomfortable and, at times, downright confounding.