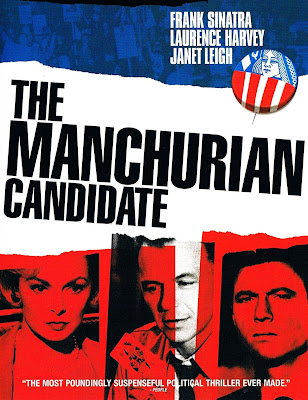 Some of the Cold War’s most outrageous paranoid fantasies are given vivid reality in The Manchurian Candidate, John Frankenheimer's glorious and oddly disturbing entertainment from 1962. Successfully navigating the tricky line between satire and thriller, the film’s off-key sensibility creates a world that exists in a singular closed orbit, with each new narrative revelation accelerating its contorted momentum. Hidden within its creepy strata is a thorough – and often humorous - skewering of Washington politics and the manipulative but fragile egos of beltway ideologues. The notion of brainwashing is a conceptual driver and the film contains a biting and resonant message: the most resilient and dangerous form of mind control is invariably self-induced.

The film’s prologue is set during the Korean conflict. A patrol of American soldiers, including the smug and frosty Sgt. Raymond Shaw (Laurence Harvey) are taken prisoner one night when their turncoat Korean guide (Henry Silva) leads them into a trap. Three days later, the men reappear, tattered and traumatized but crediting Shaw’s extreme heroism for their survival. Upon his return to Washington, Shaw is treated to a festive hero’s welcome and awarded the Congressional Medal of Honor, much to the delight of his aristocratic mother (Angela Lansbury) and his stepfather, the slow witted Senator John Iselin (James Gregory). 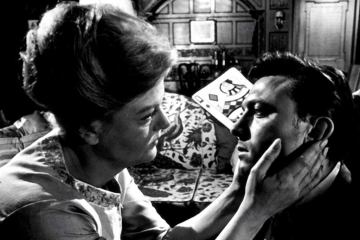 Frankenheimer skillfully conducts this expository sequence with a cartoony elegance that quickly captures the imagination. He and cinematographer Lindon Lincoln were veterans of the burgeoning episodic TV industry of the 1950s, and both men knew the importance of broad-stroke narrative foundations. Viewers are given just enough information to follow the proceedings without telegraphing the extraordinary disclosures to come. All will be revealed in good time but, for the moment, there is a mysterious sense that underneath all the celebratory pomp and brass bands, something is terribly wrong.

When Shaw’s former platoon mates become afflicted with identical harrowing dreams, Major Marco (Frank Sinatra), now an Intelligence officer, begins an investigation into Shaw’s post-military life. Meanwhile, the Iselins commence a campaign of red-baiting, with sensational charges of communists roaming the halls of the Defense Department. Although devoid of evidence – comically, Lansbury and Gregory have trouble deciding just how many imaginary communists there are – the accusations alone are enough to grab the headlines and advance Lansbury’s crafty political ambitions for her malleable husband. 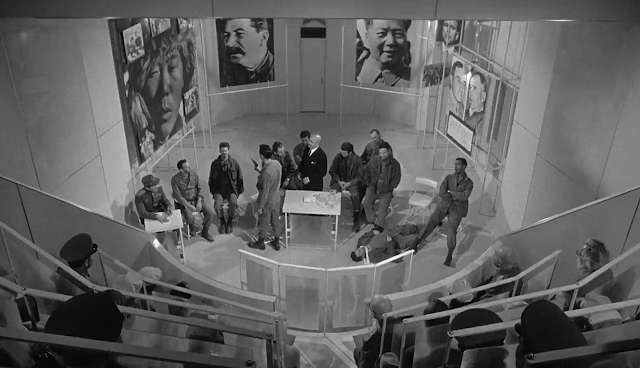 Shaw’s attempts to live a quiet life as a researcher are disrupted one day when he is taken to a shadowy Manhattan clinic for a check up. But his physical health is of no concern, for this secret examination will be conducted by Russian and Chinese experts in the science of brainwashing and post hypnotic suggestion. They must make sure the nefarious ideas implanted in Shaw’s brain back in Korea are still in perfect working order, for he will soon be called upon to execute a task; a task that will alter American history.

Despite the script’s rich plotting – some could say over plotting – The Manchurian Candidate is first and foremost an actor’s picture. The performances here are alive with a fiery vigor. The limits of audacity are stretched, but never exceeded, attesting to Frankenheimer’s impressive sense of just how much he could get away with. The film’s giddy gamut of acting styles is wide ranging, but the diversity works to create an off balance and slightly surreal effect. The bad guys – for lack of a better term – tend to be classically trained, technique driven talents, dripping with tragedy and tension, while the stalwart forces for good evoke a comforting, relaxed naturalism. 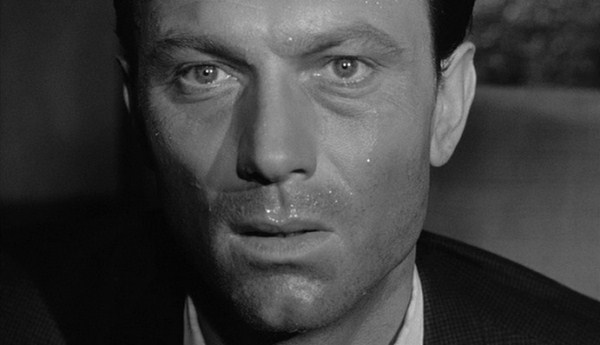 Harvey’s turn as Shaw is a memorable, astonishingly effective performance that takes advantage of his innate tendency to ham. Blessed with superb dramatic tools – intense, smoldering good looks and a baritone of sufficient power to shake the pyramids – Laurence Harvey became a fan favorite in the 1960s without, oddly enough, ever earning the unqualified respect of Hollywood. His short career was marked by performances that were supremely calculated and self consciousness, rather than deeply empathetic and organic. Harvey’s highly preened interpretations were the antithesis of the Method, but his popularity proved that significant numbers of moviegoers still found old school, diagrammed acting fun to watch. Lansbury, who received an Oscar nomination for her role, serves as a bridge to the new aesthetic, giving her Lady Macbeth a modern spin replete with media savvy and hinted forays into the taboo.

But the picture is stolen - at least long term borrowed - by Sinatra and Janet Leigh, who doesn’t let her character’s lack of necessity dampen her spirits in the least. Surrounded by these outsized characters - including the great John McGiver as the Iselins’ liberal neighbor; in one scene hilariously referring to an Iselin costume party as “a fascist rally” – Sinatra and Leigh’s success is a clear example of addition by subtraction. And if Sinatra was intimidated, as off screen gossip suggests, he didn’t show it. He and Leigh strike refreshing tones of clarity and practicality, in stark contrast to the script’s dark, multi-layer subterfuges, and emerge as the only remotely sensible characters in the entire production. 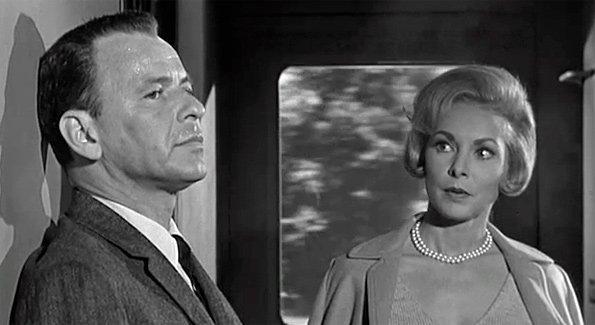 Frankenheimer’s big, suspenseful, nail-biting finish is complete with its own symbols, surprises and subversions, including an unsubtle dig at how the right wing uses religion, and vice-versa, to attain selfish goals disguised as altruisms, along with a chilling opinion of how America’s wealthy and privileged families view their offspring. The film’s lack of total resolution no doubt fed the era’s conspiracy theorists, but Frankenheimer’s goal was to shine an absurdist light on the nation’s high ranking hypocrites, not offer neatly wrapped epiphanies. By the end of The Manchurian Candidate a few of the cold war paranoiacs may have left the scene, but the paranoia raged on. 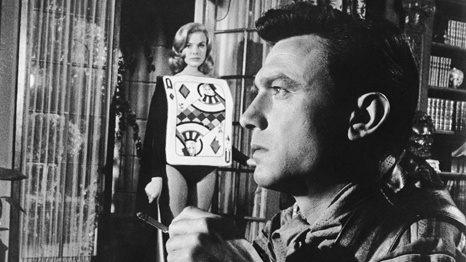 In 1962, The Manchurian Candidate was a film that cleverly glided along two tracks; it could be appreciated as a subtle political satire, or enjoyed as an exciting, straight ahead spy thriller. Today’s viewer will likely savor both aspects, in addition to being awestruck by film’s amazing predictive powers. One year after its release, an American president would be assassinated by a troubled young man – a young man from a sketchy background; who had once lived among America’s enemies – with the physical circumstances of that crime eerily similar to those depicted in this film. It will probably never be known if the tragedy of November 22, 1963 was a case of life imitating art, but those events, along with today’s nasty, hyper-partisan political atmosphere, lend a startling resonance to the film that it lacked when first released. In the truest sense, The Manchurian Candidate is a classic, for time has only increased its accuracy and immediacy.

Excellent review of one of my top 10 films! I never get tired of watching it, especially the Communist Party/garden party scene.

Great movie. I have to make a confession here. I don't read your website as often as I want to, because I have such a long list of movies you've reviewed that I want to see, and haven't seen... there's not enough time in my life to catch up with them all, and I'm not sure where I'd get hold of half of them, since my library / video store is not well stocked with foreign films. I know that every time I come to your blog, I'll see something else that I really want to watch... I feel like a person on a diet going to stand outside the ice cream shop with their nose pressed against the glass. 8-)

RH: Yes, it's really one of those films you can get lost in. Thanks.

March: Don't forget you have to try all the recipes too. I'm quite the taskmaster.

One of the first movies I ever showed my kids back in the day. Lansbury was amazing. And Sinatra seemed to care.