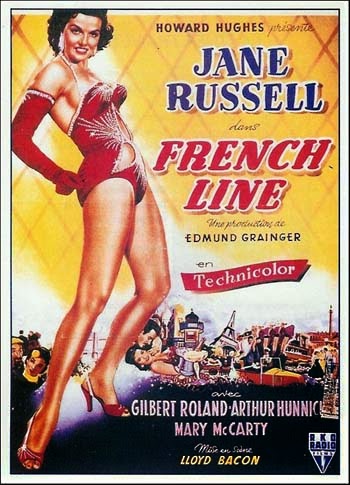 The French Line is a zany (in all senses of the word) Jane Russell vehicle from 1954, and the legendary star and her prodigious chest are in just about every scene. The plot is so over baked and goofily complex it would be hard to explain in less than a thousand words, so we’ll just concern ourselves with the high points, pardon the pun. Russell portrays a Texas oil baroness and one of the world’s richest women, but her fortune can’t buy her a lasting relationship with a man. They're all either intimidated by her money or two-bit chiselers looking for a meal ticket. She embarks incognito on a French ocean liner in hopes of meeting a romantic soul interested not in her bankbook, but her considerable personal charms.

Accompanying Russell is her childhood friend Annie (played with twangy pluck by Mary McCarty) and the two of them have rapid fire conversations that consist entirely of corny, Texas-inspired cowboy metaphors. At sea, Russell gains the affections of a famous French actor (played to the hilt by Gilbert Roland, whose French accent never quite shakes the tonalities of his real-life hometown of Juarez) and the two begin a whirlwind romance that rarely advances beyond a little light necking. Along the way, there’s plenty of singing and dancing, and even Mr. Roland gets in on the act. And while he’s a credible singer, we understand why he elected to play banditos for the remainder of his lengthy career. Comedic relief, as if such a thing was actually needed, is provided by veteran character actor Arthur Hunnicutt as Russell’s partner in the Awl Bidness: a grizzled wildcatter named “Waco”. Hunnicutt’s baroque homespun monologues are so full of references to polecats, sidewinders and varmints you half-expect Jack Elam to bust in any second with six-shotters ablazin’. 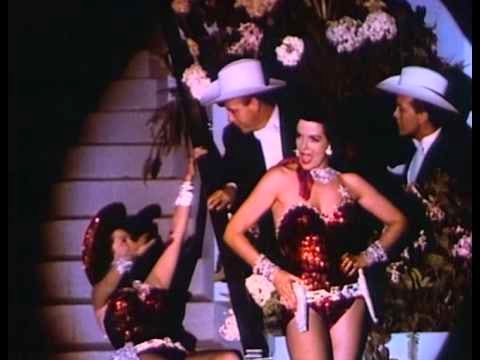 But the big finale takes place at a Paris fashion show, where Russell is pressed into service as a model. Apparently the hot look in haute couture that season was skimpy burlesque bustiers, and Miss Russell shakes her feathers (and other parts) in a rousing production number that brings down the house. To boot, all mysteries are solved, all misunderstandings cleared up and happiness once again reigns on both sides of the Atlantic. And we, like Mr. Roland, are left to marvel at Jane Russell and her “wonderful, great big......brown eyes”.

That was a fun movie, but my favorite Russell will always be Roz.