Days of Future Passed: The Combine and the Crow: Part 2 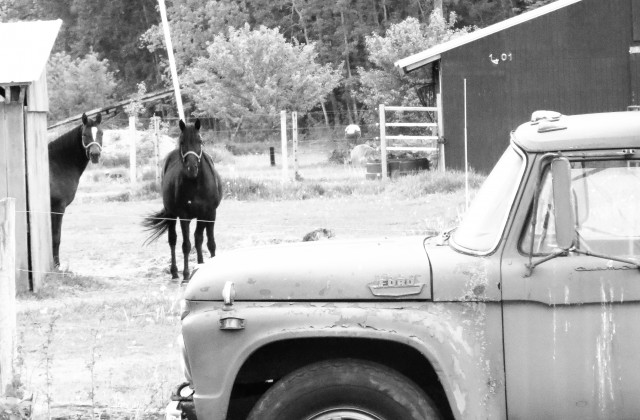 The next day while filing out of church, my father bent the ear of Mr. Barnwell, owner of the local farm supply emporium. My father described in vivid detail the combine’s death rattles, including an impressive approximation of the hideous screeching sound heard shortly before the device went totally kaput. Mr. Barnwell listened in rapt attention, hanging on to my father’s every utterance. Over the years, supplying parts for my father’s gimpy combine was a something of a cash cow for Mr. Barnwell and had contributed significantly to his children’s college fund.

Mr. Barnwell said it sounded to him like the main bearing had shot. Replacing it was not that big a job, but you would have to remove the drive shaft to get to it, which could be time consuming if you’ve never done it before. My father asked if Mr. Barnwell could get the part for him, and Mr. Barnwell replied that he was pretty sure he had the bearing in stock and would hold it for my father. Visibly relieved, my father said he’d be there first thing in the morning and thanked Mr. Barnwell profusely.

The next morning, my father decided he would try to get a jump on dismantling the combine, so he sent Eppie and me to Mr. Barnwell’s to retrieve the prized bearing. Eppie sharecropped with us and was sort of my father’s unofficial assistant. He was a hard worker, with a number of useful agricultural skills, but he had a fateful weakness for demon rum. Most days, Eppie was stone cold sober. But he was one of those guys that If he had one drink, he wouldn’t stop until the entire county had been gulped dry.

My father wasn’t sure what the part would cost, so he gave me a fifty dollar bill to cover it - Eppie couldn’t be trusted with that kind of cash - and we crammed into my father’s battered Ford pickup, careful to avoid the array of sharp springs protruding from the dry-rotted seat. As he drove the winding road to Mr, Barnwell’s, Eppie excitedly expounded on a number of topics, especially the previous night’s episode of Bonanza. As usual, he had been extremely pleased with the installment. While Eppie was a fan of TV Westerns in general, Bonanza was clearly his favorite, and the weekly doings of the Cartwright family enthralled him no end.

I, on the other hand, just sat there in a soundless stupor. I had in my shirt pocket a fifty dollar bill. In 1968, that was enough money to purchase real estate. I’d never seen a fifty spot before, didn’t even know they made them. A mere eleven years old and entrusted with the family’s entire earthly fortune. The awesomeness of the responsibility sparked a deep and penetrating introspection that made normal conversation impossible. But Eppie didn’t seem to mind. In fact, he expanded his critique to an analysis of recent episodes of Gunsmoke, including reasons, both pro and con, on whether Marshall Dillon and Miss Kitty would ever get married.

I slowly realized that, if he were so inclined, Eppie could knock me in the head, swipe the fifty and, suddenly rich beyond imagination, make a quick run for the decadent glamour of Roanoke. But my dark speculation was pointless and I quickly came to my senses. The simple fact was Eppie loved me and my father, and would gladly have taken a bullet for either of us.

Eppie’s life had been difficult, but not atypical for a black man in Southern Virginia in the 1960s. Only two generations removed from slavery, Eppie was born into dire poverty and pretty much remained there the rest of his life. His father abandoned the family when Eppie was a baby, and his mother worked as a housekeeper. One day while walking to work down a lonely country road, she simply disappeared and was never heard from again. The police investigated for all of five minutes, but predictably didn’t turn up any clues. It was the height of the Depression and no one cared about a lost black woman.

Eppie basically had to raise himself, sleeping on the porches of various relatives and working long hours at local farms for a few pennies during harvest season. Eppie was drafted into the army when WWII broke out, and was promptly stationed at a Godforsaken hole in the Burmese jungle, where he remained for three miserable years. After the war, he returned and got a job at the local sawmill, where a nasty accident relieved him of the ring and pinkie fingers of his right hand.

As we pulled into Mr. Barnwell’s football field sized parking lot, Eppie looked over at me and asked, “How old are you now?”

“11, I'll be 12 next month”, I said with a subtle head shake, not fully believing that I’d reached such advanced years.

“Yeah I reckon you’re old enough,” Eppie said as he shut off the truck’s sputtering motor. “There’s something in Mr. Barnwell’s shop you just gotta see.”

Eppie suddenly became as serious as the grave: “Oh you’ll see, but before you get outta this truck, you gotta promise not to ever tell your Daddy. He’d kill me and you both...”

WHAT!?! You can't leave the story there! It better not be two weeks before the next installment!

Sorry Buddy, I've gotten unexpectedly swamped and it's taking forever to get this story finished!

Oh, dude. This is worse than waiting for the next episode of Breaking Bad.