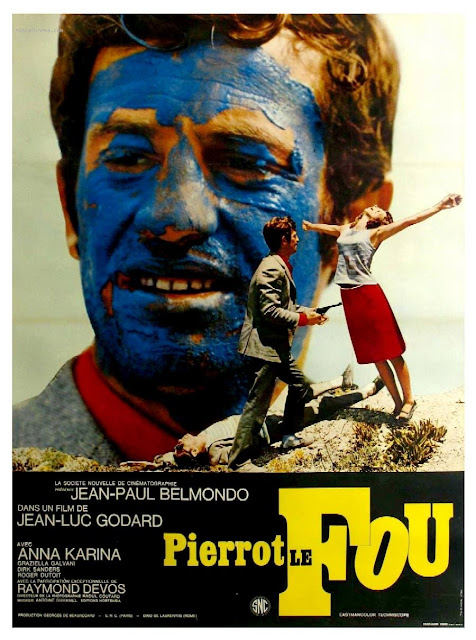 First there was the Greek civilization
Then the Renaissance
Now we are entering the age of Ass.

Released 50 years ago, Jean-Luc Godard’s Pierrot Le Fou  is pretty much everything a 1960s whacked-out French film should be. Within its bouncy, bright and colorful packaging viewers will find inflamed, seething tirades against consumerism, religion and war, not to mention a bunch of really cool cars. Those who elect to take this counter-cultural odyssey had best be prepared for a dizzying barrage of literary allusions, cinematic references, shocking violence, unflattering portraits of American tourists and even a depiction of waterboarding. When this grand and goofy journey reaches its nihilist conclusion, you may be glad, angry or exhausted, but you won’t forget it anytime soon. 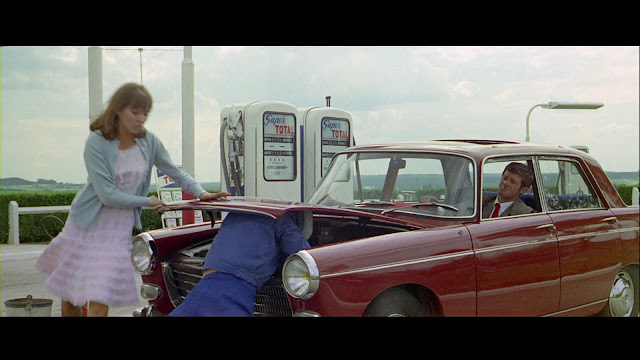 Pierrot Le Fou is the story - if one may use the word “story” in reference to a Godard film - of a bored, unemployed bourgeois (Jean-Paul Belmondo) whose wife (Graziella Galvani) is angling to get him an executive position at Standard Oil. Aghast at that prospect, Belmondo decides to run off with an alluring babysitter (Anna Karina), who has a large collection of rifles and a bleeding corpse stashed in her Paris studio. Karina has stolen a great deal of money from her uncle and is being pursued by thugs in shiny polyester suits. The film then morphs into a road picture - all Godard films of this period eventually morph into road pictures - as the couple flee to a secluded town on the French Rivera.

Along the way, we encounter a number of familiar Godard tropes: terrible driving, reckless gun play, seemingly endless nonsensical conversations and the occasional slapstick robbery of a gas station (what is it with Godard and gas stations anyway?). But the film has two memorable set pieces that are dialed in just right. In the early going, Belmondo attends a party where the conversations consist entirely of advertising slogans. This sequence also features a cameo appearance by director Sam Fuller, although no one seems to know why. Later, when he and Karina attempt to support themselves as street performers, they reenact the Vietnam War using lighted matches and makeshift toy airplanes for a delighted group of American tourists.

Unfortunately, Pierrot Le Fou’s great scenes are offset by long, tedious stretches that can make for a challenging sit. Still, it marks the mid-point of Godard’s voracious appetite for filmmaking in the 1960s; a decade that saw him write and direct over thirty features, shorts and documentaries, creating much of his best work in the process. The 1970s and 80s were no less productive, but short on critical acclaim as the director plunged to new depths of deliberate obtuseness. 1996’s For Ever Mozart - a visual poem chronicling the battle between creativity and destruction - signaled the beginning of a comeback that has continued to this day, with his Goodbye to Language (2014) taking the jury prize at Cannes. At age 86, the director is still active with new projects in the works, and he’s lost none of his inventive, polarizing, at times infuriating brilliance. He’s still Godard Le Fou.