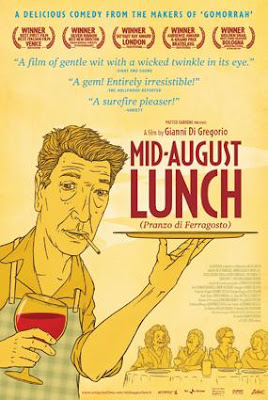 Mid-August Lunch is as light and delectable as the title implies. This charming Italian comedy stars Gianni de Gregorio (who also wrote and directed) as an unambitious 60-ish bachelor who lives at home where he cooks and cares for his aging and slightly demented mother (Valeria de Franciscis). The pair quietly subsists on Mom’s pension check, much of which Gianni spends at the local wine shop. 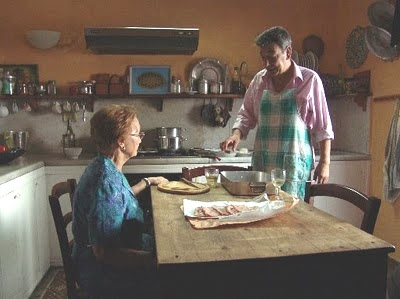 As a result, Gianni has gotten behind on the family’s obligations and years of unpaid condo fees and doctor’s bills are starting to mount up. But with the Italian holiday of Ferragosto approaching, Gianni is offered a way out of his difficulties. His creditors, with elderly mothers of their own, are desperate to head to the beach for the holiday and are willing to forgive Gianni’s debts in exchange for a little caregiving. 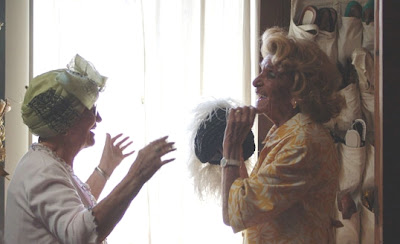 Soon Gianni’s compact Roman flat begins to resemble a retirement home, as a steady stream of ancient matrons are dropped at his door and makeshift beds and cots are hastily fashioned in every corner. Gianni finds his new charges to be anything but the sweet little old ladies he was promised, but rather stubbornly independent matriarchs determined to undermine any measure of authority placed over them, even his own. His attempts to keep them on proper diets and medication schedules go hilariously awry and before long, the sedate retirement home looks and sounds more like an unruly kindergarten, with the women engaging in loud spats, secret eating binges and forbidden trips to sidewalk cafes. 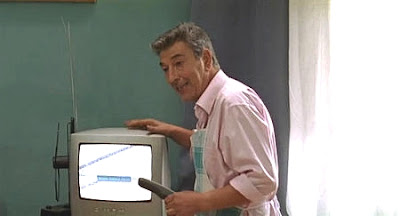 Those who care for elderly relatives will be chuckling in recognition virtually from the first frame, as de Gregorio has done an amazing job of capturing the cat and mouse game that goes on in such situations. His use of nonprofessional actors – actual pensioners from his neighborhood – gives the production an astonishing sense of authenticity and makes the film’s gentle humor much deeper and richer. Gianni’s face, a blunt hybrid of Jerry Orbach and Jack Klugman, is the real star of the movie, and it perfectly registers every dashed hope and comic misstep, as dealing with these women physically and emotionally exhausts him. 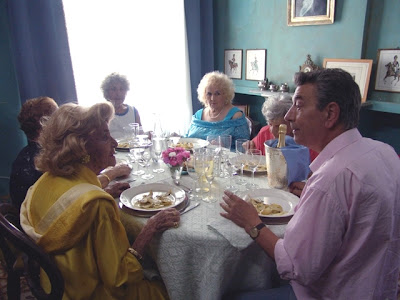 Ironically, the ravages of age often cause our respected, revered elders to revert to childish behavior; at times becoming indistinguishable from two-year-olds. Mid-August Lunch is one of the first films to deal with this phenomenon in a comic, but realistic way. And let’s hope it’s not the last, for it provides a much needed catharsis for what sociologists have dubbed “The Sandwich Generation”.