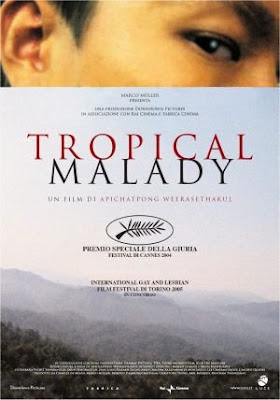 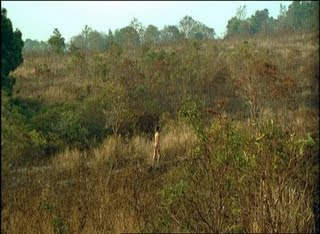 A.W. loves trees and bushes. He loves sounds and shapes and colors. And rain. He is absolutely nuts about rain. He is only interested in people when they are doing the most boring and mundane things imaginable. A man looking at shoes is a major cinematic event to Apitchatpong Weerasathakul. He will begin telling a story, in this film it's a sort of a gay romance, then get sidetracked by looking at trees and bushes and listening to rain. The story may pick up again later on, or it may not...there's a pretty field of green grass over there...lets film that for a while. Wait...set up the dolly...we'll do a dolly shot of the grass. What the hell is he filming now?...ok here are some guys in a hut...they are supposed to be witch doctors or something. Give up. 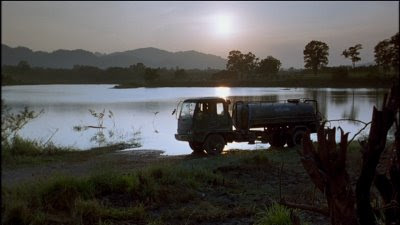 Resistance is futile. Apitchatpong Weerasathakul does not make films for the logical mind. His films can only be experienced as random sensory input. You must get in his car and let him drive you wherever he wants to go using whatever route he wants to take. The audience has no say in the proceedings. He doesn't care one bit about what you think so shut up. He is like the kid in Art School who forgot to become a cynical money grubber. People persist in calling his films experimental because that is the only way a logical mind can make sense of his oddball constructions. Weerasathakul's films are not experimental in the least. He knows exactly what he is doing. He does not make films for you and me. He makes them for himself. Love'em or hate'em...he couldn't care less. And speaking of oddballs, he's got big, brass ones.