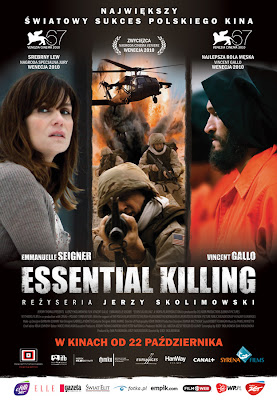 An Afgan POW faces rendition, torture, hypothermia and a roving band of adorable Border Collies in Essential Killing, a new video-on-demand release from Tribeca Films. Whether Essential Killing is worth demanding is a complex question; it’s a film of artful, inspired moments interspersed with wobbly plot devices and eye-rolling conveniences. At times, the film feels like a script leftover from The Fugitive TV series of the 1960s, given a millennial makeover and spiffed up with makeshift post 9/11 relevance. The resulting construction fails to capitalize on its strengths in any meaningful way, and over the course of the film, becomes weighed down by ever expanding illogical baggage. Tiny stretches of credibility – that could have easily been forgiven once or twice – begin to enlarge and ultimately dominate the proceedings. By the time all is said and done, the film, much like its taciturn protagonist, withers into a fine powder of blowing snow. And audiences are left to quietly wonder just what veteran director Jerzy Skolimnowski was hoping to achieve.

The film's opening sequence is powerful and skillfully done, as we meet a lone Afgan fighter named Muhammed (Vincent Gallo) scurrying through a vast maze of desert canyons, hoping to avoid detection by a hovering American helicopter. Also in the canyon are a pair of hung over, party animal American civilian contractors (Zach Cohen, Iftach Ophir) led by a  solider (Raymond Josey) heavily laden with hi-tech equipment designed to detect IEDs. After a suspenseful build up, their paths eventually cross, resulting in a violent confrontation. The fleeing Muhammed is tracked by the chopper and, in a wonderful bit of spinning air-to-ground cinematography, we see him cornered like a rabid desert dog.


Later, Muhammed and a large group of hooded and bound Afgan fighters are shipped to  for more aggressive questioning. Their voyage takes place under cover of night, in a military cargo plane so devoid of creature comforts this reviewer will never again complain about Southwest Airlines. But a funny thing happens on the way to the waterboard, and when a speeding transport truck swerves to avoid some scurrying wildlife, the vehicle careens down an icy hill, tossing out prisoners like a popcorn machine. Muhammed is thrown clear of the wreckage, and finds himself transformed into a Mujahideen version of Dr. Richard Kimble. He quickly scampers off into the snowy forest for a date with freedom – or frostbite.

Acts of idiocy can be endearing on Reality TV – see Roseanne’s Nuts – but at this point audience opinions of Muhammed’s reasoning skills are likely to be widely diverse. Solimnowsky never quite makes it clear how audiences are supposed to feel about his disheveled hero. At times he appears to be an innocent victim of dogmatic religious doctrine; at times a noble rustic caught in a web of Western imperialism but, in the later reels of this film, he mainly comes off as kind of a jerk. Vincent Gallo tries mightily to breathe a sympathetic life into this character, but his Muhammed embarks on so many ill-conceived schemes in his quest for freedom most viewers will want to kick him

The script doesn’t help him out very much, loaded as it is with coinkydinks and ham-fisted attempts at cultural relevancy. About halfway through, the starving Muhammed eats some berries that, for the muddled purposes of this film, turn out to be hallucinogenic.  Soon, he is descended upon by a dozen or so playful Border Collies as he cowers in abject fear. Supposedly, Solimnowski is attempting some sort of reference to the well known Muslim fear of dogs, but here it seems awfully silly, and most viewers will wonder just what the hell purebred, Westminster-ready Border Collies are doing wandering the Polish wilderness. Later, when the toll of his wintertime idyll becomes life threatening, Muhammed staggers to the door of a forest cottage that looks like something from a Thomas Kincade painting, and inhabited by a lovely lady (Emmanuelle Seigner) who sensuously cleans his wounds. When the local constables visit to inquire about an escaped Islamist, it turns out Muhammed’s kindly nurse is actually deaf and mute, and unable to divulge any helpful information.

And therein lies the essential issue with Essential Killing. Is it meant to be an allegory? A profound commentary on the War on Terror? Or simply a bracing adventure film of Man vs. Nature? One could make an argument that it ultimately fails on all these counts, primarily due to never clearly declaring a thesis. An assortment of interesting, well photographed sequences is not sufficient to comprise a film of such obviously higher aims. Essential Killing is a film of ambition, skill and laudable effort. If it ever decides on a theme…let us know.