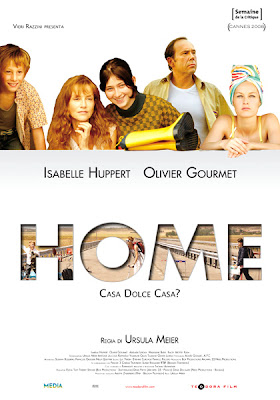 Despite suffering from metaphor overload, Home generally manages to be engaging and entertaining. Isabelle Huppert and Olivier Gourmet star as a middle class couple attempting to raise their three kids in an isolated, ramshackle house atop a golden meadow. The tableau is right out of an Andrew Wyeth painting, save for one fact: running across their front yard is an unfinished strip of freeway; a relic from a road building project abandoned ten years earlier. 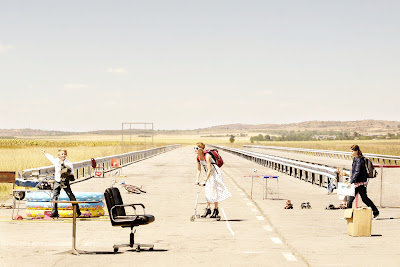 In the interim, the family has made good use of the empty and forsaken blacktop, finding it a perfect site for roller hockey games, barbeques and the obsessive sunbathing of coquettish daughter Judith (Adelaide Leroux). The first third of the film is devoted to establishing the close knit family’s peaceful and happy life in this sunny, off the grid Shangri-La. When they aren’t congregating on the roadway to enjoy a moonlit night, they gather around the bathtub for a bit of communal hygiene. 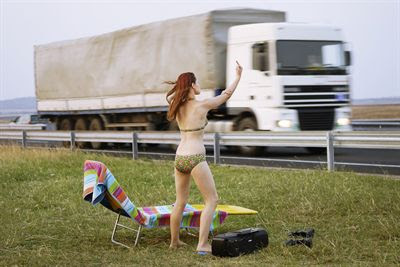 But trouble soon erupts in paradise, as one afternoon a caravan of heavy equipment slowly lumbers down the deserted lane, and Huppert and company can only watch in horror as it becomes clear that the government intends to finally finish this project once and for all. Eventually, the roadway is opened to the public and the family must deal with a constant stream of speeding sedans and rumbling diesel trucks, creating a maddening and inescapable din. Judith’s bikini-clad displays become a favorite entertainment of passing motorists, and truckers loudly honk their horns in salacious approval. Gourmet, in his self appointed role as family protector, ultimately reaches his breaking point and enacts a solution that is both draconian and potentially deadly. 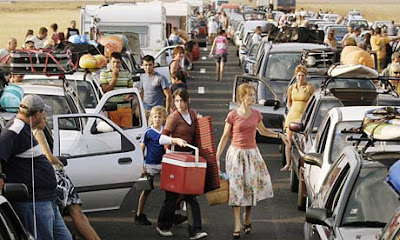 As a parable of modern life, Home will leave you wondering just what in the world director Ursula Meier is up to. The film is open to a wealth of interpretations, and can be viewed as everything from a treatise on the perils of industrial society to an anti-government screed. Politically, Home makes a strong case against the tyranny of the majority, as the family’s blissful life is ruined by the popular, long awaited highway. There are also allusions to European history, as the slow march of the giant earth moving machines parallels the Nazis’ promenade into Paris sixty years earlier. 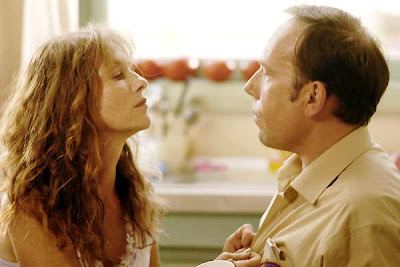 But, like the best fairy tales, Home can be enjoyed on a simple level, without probing for its deep, hidden morals. The depiction of this unique family’s daily life is filled with moments of warmth and offbeat humor, and with Huppert and Gourmet, we get a chance to watch a couple of consummate actors at work. Their subtle performances are dialed in just right, and give this fanciful yarn an essential edge of credibility. Without them, the film could simply be dismissed as a sort of live-action cartoon. With them, Home becomes a pleasurable and intriguing place to be.