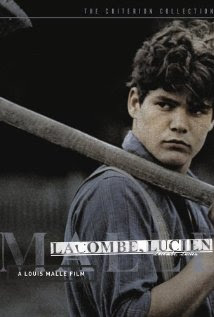 Reviewed by Shu Zin
Director Louis Malle’s wonderful movie, LACOMBE LUCIEN starts in June, 1944, and ends in October of the same year. The story is full of dark humor and illuminates the divisive atmosphere of WWII in rural France. After being rejected by the partisans because he is too young and naïve, baby-faced peasant Lucien (Pierre Blaise) leaves home to work for Nazi collaborators, becoming a member of the German police almost immediately.

A crack shot, and enamoured of the lethal and psychological power of guns, he takes to the role like a duck to water; cruelty and manipulation come easy. But this implacable, uneducated, young farm boy is unpredictable, a curious blend of hubris and deference. Scenes of brutal sensibility paint an ugly picture of the opportunistic French Nazi-collaborators as they capture partisans and Jews for interrogation and execution.

One of the French fops working for the Germans takes Lucien to Albert Horn (Holger Lowenadler, in a dignified, nuanced performance), a Jewish couturier who has fled Paris and his successful business. M. Horn makes him a suit with pantalons de golf and introduces him to his beautiful daughter, France (Aurore Clement), and his taciturn mother, and a relationship develops when Lucien falls for the lovely France. Lucien’s behavior is fascinating and best understood through empathy with this farm boy’s native intelligence and complete lack of exposure to formal education and politics. There is, throughout this intriguing and brilliantly subtle film, something at once sociopathic and endearing in Lucien. In the words of M Horn: I find it strangely difficult to completely detest you. This is a well made, fresh and intelligent film, one highly recommended by this lover of the smart and thought-provoking.