Days of Future Past: The Perils of Do-It-Yourself Part 1 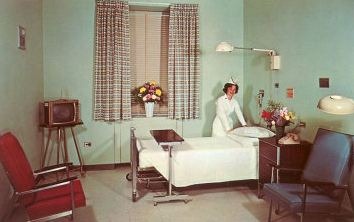 All the men in my father’s family were avid believers in DIY. Whether it was due to fierce independence, egoism or, most likely, cheapness, the Anderson boys stubbornly believed that consulting “experts” was a silly waste of money. Who needed experience and book learnin’? They were convinced they could accomplish any given task to a degree of basic acceptableness. The result might not be fancy or perfect, but look how much money they’d saved!

My Uncle Larry often took this idea to the extreme, even going so far as to deliver his first two children himself. Well that’s not entirely true --he did have the help of a local woman with midwife experience-- but still, Audrey and Jerry Anderson were brought into this world without any need of one of those newfangled maternity wards.

But Uncle Larry changed his tune in the summer of 1958 when young Audrey came down with a severe stomach ache. At first, Uncle Larry dismissed the problem as “female trouble” even though Audrey was only 7 years old. He prescribed a treatment of baking soda, hot water and bed rest, claiming she’d soon be “fit as a fiddle”. What followed were two hellish days in which Audrey threw up an estimated fifty times. Aunt Sally gave up on changing Audrey’s fouled bed clothes and moved the suffering child out onto the front porch where she quivered on the floorboards with a tin bucket at the ready. Eventually the sleepless Aunt Sally confronted her skinflint husband saying --and I paraphrase-- “Look you stupid fool, I’m taking Audrey to the hospital, and if anything happens to her I'm never coming back. You can fix your own damn bacon for breakfast.”

They were too late to the hospital. Little Audrey’s appendix had burst. She remained hospitalized for three weeks while all manner of toxic detritus was pumped from her body. Meanwhile Audrey, barely conscious, desperately clung to life. As thunder clouds approached one dark afternoon, Dr. Harris, who had attended elementary school with Uncle Larry, took my relative out into the hall and gave him a thorough ass-chewing. He told Uncle Larry that Audrey’s chances were 50/50 at best and that if she died it would be due to Uncle Larry’s negligence. Dr. Harris also informed my uncle that if he heard of any more “kitchen table births” at the Anderson household he would have the deputies come and arrest my uncle for manslaughter.

It seems unlikely that Dr. Harris could have made such charges stick, but he was a tall, imposing man who had graduated from Duke so he was rarely contradicted. His words had the desired chastening effect on Uncle Larry, who spent the next three days at his daughter's beside, silently praying and wallowing in guilt. Slowly, Audrey began to strengthen and a few days later she was able to sit up in bed. Later, with help of a nurse, Audrey took a short, gingerly walk down the hall as a smiling Dr. Harris monitored her progress. The color returned to Uncle Larry’s face as well, and he flopped down on a bench in the hallway and succumbed to that sort of garish, abject weeping that often afflicts grown men.

Audrey’s convalescence caused her to miss the first few weeks of school that fall, but eventually she had a full and complete recovery. She would go on to thirty-five years of employment  as an office manager at the Spruance plant in Richmond. She was offered early retirement two years ago and happily jumped at the chance. Today, she lives a quiet life with her husband Kenneth and always seems to have a houseful of visiting grandchildren.

On this occasion, Audrey and Uncle Larry both dodged their respective bullets. You would think this close call would have taught Uncle Larry a valuable lesson. He did give up his amateur medical practice, but centuries of inbred Scot-Irish frugality do not evaporate overnight. He could still, as my father would say, “squeeze a nickel until the buffalo hollered.” And a few years later Uncle Larry dreamed up a new risky gambit to save a few shekels...

Holy cats. I come from a family of southern mountain folk, who birthed all their babies at home, too. But not because they refused to go to the hospital. Because there was no hospital - everyone had babies at home. Happily, this is no longer the case. Glad Audrey made it! I've never understood folks who won't give their kids proper medical care.

Stubbornness and pride can be good to a point, but they can really get in the way of good judgement. My wife had a brain infection(!) when she was a kid and her dad thought she was just trying to get out doing stuff.

Brilliant, thank you. You are such a great story teller. Dashing to catch up with parts 2 and 3.

Will: Thanks, that means a lot coming from my favorite humorist!