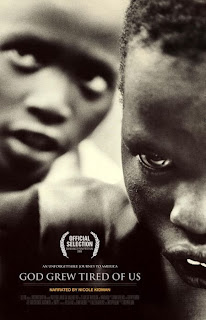 In this riveting doc, we learn all about the tortures endured by the Sudanese "Lost Boys" and the challenges they continue to face trying to build new lives in America. Director Christopher Quinn's approach is simplicity itself. First, we visit the boys in their squalid Kenyan refugee camp where we hear harrowing tales of the campaign of genocide the Sudanese government has been waging against them for a generation and the extraordinary measures the young men were forced to take in order to survive. 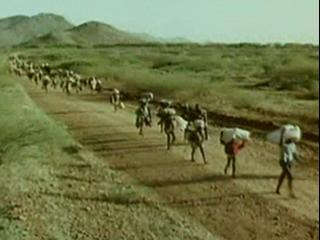 Then the camera objectively follows a select group of boys as they embark on the lengthy flight to the U.S., where a strange new world, far beyond their experience, awaits them.

There are several quite amusing scenes as the young men adjust to modern life - they are confused by Santa Claus and fascinated by scantily clad women on TV, for instance - but they are unable to forget their loved ones left behind in Africa and they are often overcome by a poignant homesickness. 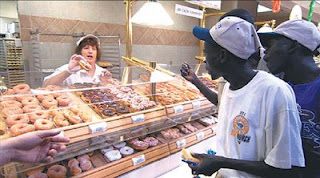 Our local church sponsored several of these young men back in 2004 and they attended the church school and were regulars at services. They have all graduated now and have gone off into the world to seek their fortunes. I did not know anything about their terrible history or why they were there and I never took the time to converse with them or offer any sort of assistance. After seeing this film, I deeply regret that missed opportunity.

Email ThisBlogThis!Share to TwitterShare to FacebookShare to Pinterest
Labels: Christopher Quinn, God Grew Tired Of Us, Lost Boys of Sudan