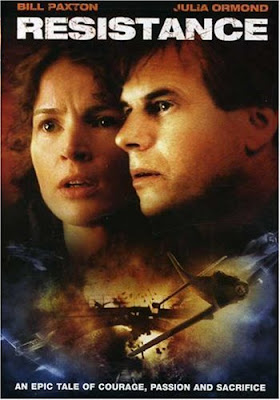 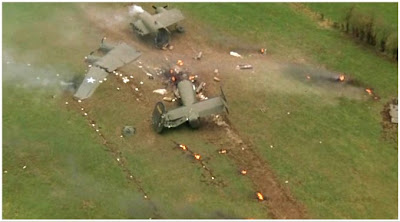 The film shows a bit of promise in the early going, as a plucky, courageous kid named Jean (Antoine Van Lierde) helps the injured Paxton elude capture and delivers him via wheelbarrow to Ormond’s cottage, which has one of those secret rooms behind the closet that come in so handy at times like these.

There, Ormond sensuously cleans Paxton’s wounds and rapidly nurtures him back to All-American Boy gee whiz health. Apparently, Paxton’s injuries weren’t really that serious. Despite being the only survivor of a horrific plane crash, all he really needed was a few days rest and a damp cloth. This is the first warning sign of dangerous plot-holes ahead and those fissures only get wider and goofier as the film progresses. One scene in particular is a howler: Paxton staggers down from his attic redoubt, barely able to walk, but within a few minutes he is dancing the jitterbug with Ormond who, despite crushing agrarian poverty, has an impressive collection of hot jazz records. 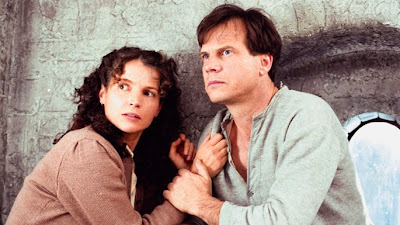 Meanwhile, Ormond’s husband is away with the guys on a Resistance outing; blowing up bridges and railroads and maybe a little fishing. In his absence, she and Paxton decide that it would be a fine idea to start taking baths together. Yes, “Resistance” gets pretty mushy before we’re through, and yes you can see it all coming a mile away. But it’s not long before the realties of war, and disgruntled husbands, cause this burgeoning romance to come tumbling down.

A few shocking moments are attempted as we reach the conclusion, but they all fail, and the Germans, despite their nifty uniforms, seem as pathetically clueless as the ones on “Hogan’s Heroes”. Worst of all, the great Sandrine Bonnaire is nonsensically wasted in a dinky little role. But that’s fitting. With Resistance, nonsense is par for the course.