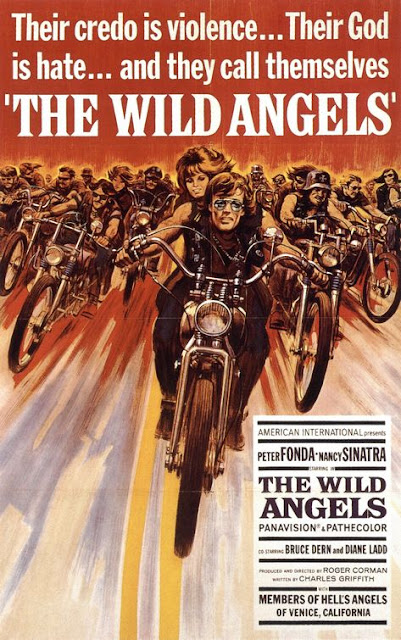 Epix has added a new channel on Dish TV called Epix Drive-in, which promises a steady offering of B movies. I can tell I’m going to have a lot of fun with this channel. Yesterday I subjected myself to 1966’s The Wild Angels, a movie much more interesting as historical artifact than entertainment. It was directed by Roger Corman, which I suppose elevates it to cult status. It’s a cult I’ve always avoided, so I won’t bore you with arguments that Corman’s cinematic cheese was actually art-house in disquise, nor can I offer perspective on The Wild Angels’ place in the Corman lexicon. I can only say that the movie offers a fascinating glimpse of a number of boomer icons in their salad days, in a story that’s decidedly un-Hollywood when it comes to morals. 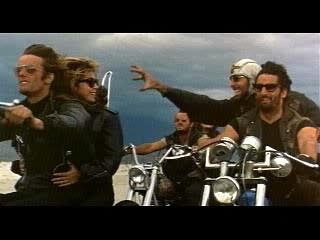 Here we learn learn all about the appalling lifestyles of a Hell’s Angels franchise located in San Pedro, California. The outfit’s two dozen or so members spend their days engaged in rampant hell raising and oblivion partying, leaving little time for bathing or personal hygiene. The group is led by Blues (Peter Fonda), a laconic, sensitive biker who has not abandoned good grooming entirely, and his top lieutenant named Loser (Bruce Dern), a thuggish punk of questionable sanity. Blues is suffering from a sort of existential crisis; his girlfriend Mike (Nancy Sinatra) is growing weary of the biker scene and has started to make subtle noises about marriage and the suburbs. Meanwhile Loser’s significant other (Diane Ladd) is dealing with fits of jealousy due to the group’s free love ethos. When a contingent of bikers led by Blues and Loser confront a Latino mechanic suspected of stealing a member’s Harley, things turn ugly and violent mighty fast, making the men wanted fugitives in a cop killing.

However The Wild Angels is no tale of wrongly accused innocents. Corman pulls no punches in establishing the club’s underpinnings of savage scumbaggery. Their campsite parties, adorned with garish swastikas and symbols of hatred, are filled with violent and sexist debauchery. Later, the Angels demolish a church interior and transform it into a writhing opium den, as several bikers forcibly sample Diane Ladd’s sexual wares on an altar draped with the Nazi flag. Corman drags these segments out to the point that viewer outrage gives way to sullen numbness. Perhaps that’s his point, but the story’s momentum --what little it had achieved anyway-- gets mired in a bog of shoddy staging and wretched excess. 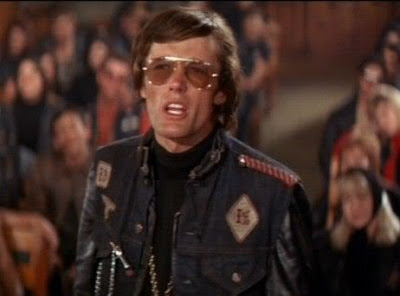 Personally I am not a gang rape enthusiast but, viewed from today’s perspective, The Wild Angels still holds engrossing charms, beginning with the performance of young Peter Fonda. Over the years, Fonda has morphed into a respectable character actor, but in those days he couldn’t act a lick. In The Wild Angels his line readings are so nakedly devoid of timing and nuance they're a splendor to behold. In the final act, Fonda delivers a impassioned speech on what it means to be a Hell’s Angel --which is basically a nightmarish version of libertarianism-- but his awkward, lurching monologue sounds like a kid in a Christmas play who’s forgotten his lines.

Bruce Dern plays, well, Bruce Dern, and proves that there’s never been anyone better at playing Bruce Dern than Bruce Dern. Despite his youth, the menacing glassy-eyed mumble that would launch him to a long and successful career was already in full flower. Just to emphasize the point, the film also features Michael J. Pollard in a bit part, but his patented creepiness seems almost warm and fuzzy compared to Dern’s pitch-black glare. At the time, Diane Ladd was the real life Mrs. Dern and Laura, interestingly enough, would be born a year later. It must have been quite a luxury for producers in those days to score two major talents with one phone call, and this role makes good use of her now familiar sexy earth mother projections. 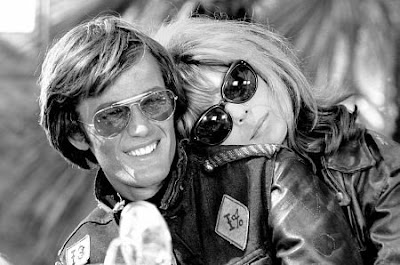 Ultimately, the real saving grace of these Angels is in the form of Nancy Sinatra. Like her father, what her acting performances lack in technique is surpassed by a refreshing and unvarnished honesty. No doubt her charisma is enhanced by our knowledge of the awesome musical legacy locked deep in her DNA, but nonetheless she exuded a natural cool that dominated every scene. She also formed a generational bridge that ties cheap trash like The Wild Angels to Hollywood’s traditional notions of justice and catharsis. During the film’s most disgusting moments, you wish Frank would walk in and give these punks a good sound thrashing.

Negative reviews can be so much fun. I've never seen this one either. I've been digging into more b-movies lately, but haven't gone so low as Corman yet.

Thanks for the fun review, Bunchie. We saw an excellent film last night: Argo. Highly recommended. Exciting and original. And I never had thought that I would once like Ben Affleck in a film. And I did. He was great. And he is not only the star but the director too. My world is shaking.

RH: It's like a freak show, very odd fun. But without Nancy it would be merely junk,

Bob: Looking forward to Argo too.