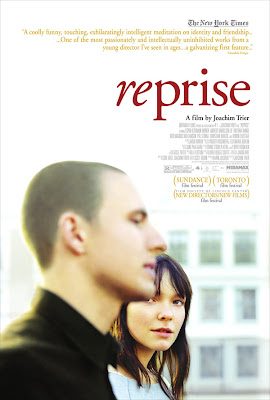 Reprise is a sort of Breaking Away for the literary set that director Joachim Trier attempts to spice up with graphics and editorial flourishes. Philip (Anders Danielson Lie) and Erik (Espen Klouman Hoiner) have been friends since childhood, and have developed a special bond over a shared love of edgy novels and obscure techno albums. Now in their early 20s, the young men each submit manuscripts and Erik’s is accepted for publication while Philip’s work is roundly rejected. Philip falls into a deep depression requiring a hospital stay (damned socialized medicine) and Erik is consumed by trying not to feel guilty. Trier gets, or at least doesn’t prevent, nice performances from his actors, especially Lie, who can hold his head in utter despair with the best of them, and Viktoria Winge, whose blithe, hippie qualities offer Philip, and the viewer, some heartfelt solace. But a promising subplot concerning a reclusive author, a Norwegian version J.D. Salinger, goes absolutely no where while our heroes’ group of “normal” guy friends only distract from the progression. There’s an interesting film in this material, but Reprise falls short of its target. Still, there’s some fine music by New Order and Joy Division that will make you nostalgic for parachute pants and poppers. Maybe not. 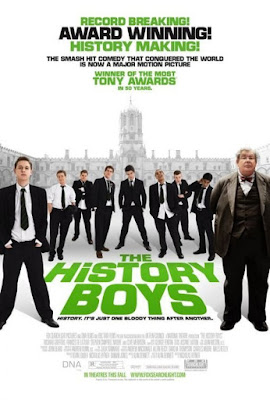 The bubbly percussion of Blue Monday can also be heard in this film, set in 1983 and currently showing on Sundance. Based on a play by Alan Bennett, The History Boys details the year long effort by a group of Sheffield school teachers to prepare a close knit bunch of insufferably bright lads for their Oxford entrance exams. The film cleverly presents the central dilemma of modern education – whether students should be taught to pass standard tests or given a well-rounded, if somewhat subjective, education about life – and presents strong arguments for both sides of the debate. Richard Griffiths, delightfully creepy Uncle Monty from Withnail and I, shines as an entrenched instructor who firmly believes in the old style of freewheeling. While his performance is a bit cartoony in spots, at about the midway point he delivers a somber and heartfelt analysis of a Thomas Hardy poem that will bring you to tears. There are no other moments of equal emotional depth however, and the film seems to lose some narrative focus as it reaches the finish. But in all The History Boys is a worthwhile and entertaining diversion, if you have nothing pressing to do. 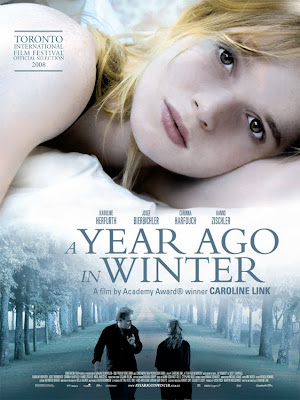 This moody German import, adapted from an American novel by Scott Campbell, can also be found on Sundance. A grieving mother (Corrina Harfouch, Germany’s answer to Helen Mirren) commissions a painting from a middle-aged local artist (Josef Bierbichler), who specializes in large scale commemorative portraits of the dead. Harfouch’s bright and beloved teenage son died under mysterious circumstances a few months prior, and she hopes the enormous canvas will bring her a sense of closure. But Bierbichler, whose constant contact with painful, aggrieved customers has forced him to retreat into virtual hermit status, finds himself fascinated by the family of the recently departed, especially his willowy, dreamy - and deeply troubled - sister (Karoline Herferth). Part intriguing mystery, part analysis of the stages of grief, A Year Ago in Winter unfolds slowly and carefully, with finely tuned performances and damply chilling textures. It drags on a bit long, but ends on rewarding notes of nuanced and truly meaningful catharsis. 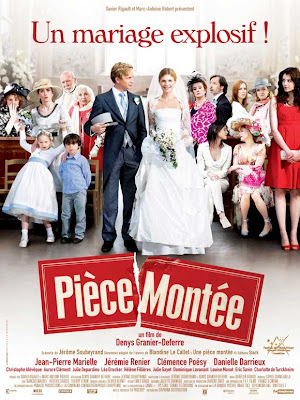 Pièce montée (Wedding Cake) is a big, dumb, French wedding comedy, set in one of those charming country villages that make frazzled Americans want to say the hell with it and move. Aided enormously by its assemblage of talent – Jeremie Renier, Clemence Posey, Jean-Pierre Marielle and Julie Depardieu all lend their names to the film’s impressive call sheet - Pièce montée advances with a brisk, amusing momentum. Along the way there are several cases of cold feet and family resentments aplenty, and even a rekindling of a long forbidden romance. Depardieu steals the show, as usual, with her turn as a free spirited Maid-of-Honor, but she is fun to watch here and, considering her pedigree, really can’t help herself. Pièce montée is one of the better goofball comedies to show up on TV5 Monde in recent months, and while that’s not exactly a compliment, it has the distinction of being at least tolerable from beginning to end.
at June 07, 2011