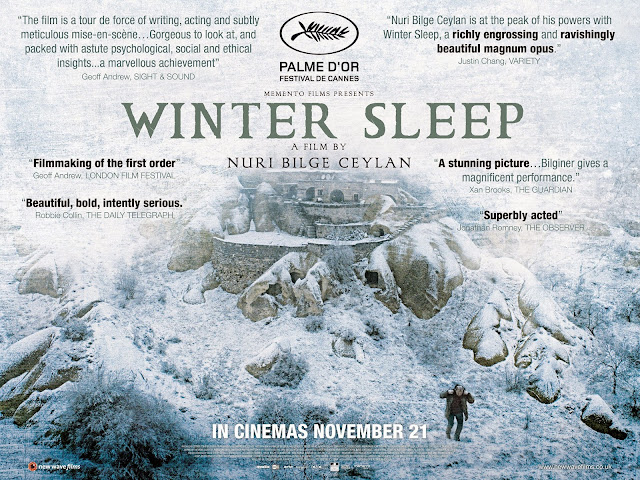 Nuri Bilge Ceylan’s Winter Sleep, 2014’s Palme d’Or winner, transports viewers through a maze of unforgettable landscapes, ranging from the rugged volcanic cliffs of central Turkey to the most private recesses of its characters’ souls. Just as it took eons to sculpt the area’s surreal natural beauty, Ceylan’s story proceeds at a similar glacial pace, buffeted by the unpredictable climate of human interaction. It is a film of somber, reflective moments and quiet conversations, typically with menace lurking beneath their polite veneers. The world of Winter Sleep abounds with fairy tale caves and storybook houses carved out of solid rock yet, while nature has made a place for humanity in this unforgiving terrain, the residents seem unable to find room in their hearts for love. 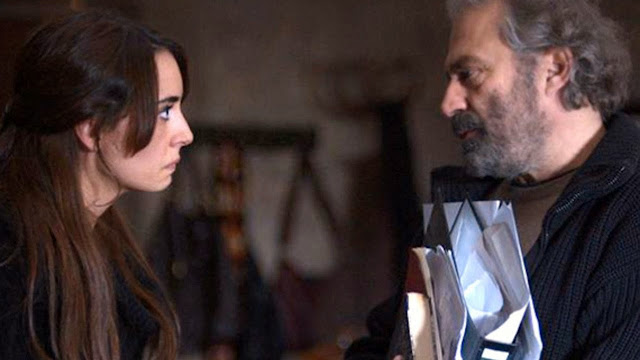 Here we meet Aydin (Haluk Bilginer), an aging Shakespearean actor and former toast of Istanbul society. Aydin has forsaken the sophisticated life and come to this remote backwater to manage properties inherited from his late father. In tow are his divorced sister Necla (Demet Akbag) and his young wife Nihal (Melisa Sözen), who he treats more like a flighty teenage daughter than a soulmate. Aydin spends a lot of time in his study, essentially a repurposed cave, hunkered behind his Macbook churning out newspaper columns and researching a book he plans to write on the history of Turkish theater. As the torrential rains and icy winds that signal the coming of winter batter the rocky walls of his inner sanctum, another storm begins to churn involving a family of disgruntled tenants, who have fallen behind on their rent.

From this scantest of underpinning, Ceylan develops a story that will evolve over the next 3 hours to reveal the flaws and fallacies of each of his characters. Working in a style that evokes a hybrid of Tarkovsky and Eric Rohmer, the regal Aydin and his bumpkin cohort engage in long conversations in which the participants are given just enough rope to hang themselves. Capturing low key reality and often finding the subtle humor within has always been Ceylan’s strength, and in these scenes the director cultivates nuggets of universal truth that amuse, mystify and stun. In a hilarious moment, a tenant facing eviction (Serhat Mustafa Kiliç) comes to Aydin to abjectly beg for forgiveness and the two men end up miserly debating the proper cost of a broken window. A scene that will have writers rolling in the aisles occurs when Aydin, immersed in his work, is visited in his study by Necla, who promises to be quiet but soon offers unhelpful suggestions on how he can reach a larger audience.

And it’s really the writing that launches Winter Sleep into a rarified air beyond its splendid visual beauty. Ceylan’s wife Ebru is listed as co-writer, and it’s clear a female point of view is critical to the development of Aydin’s character. Adept at playing Shakespearean kings, Aydin uses a sort of royal benevolence to define himself. He seeks to give everyone what they want, be it a hotel guest expecting to see horses or making a large contribution to his wife’s ill-conceived charity. Yet these gestures are not made out of compassion, but out of Aydin’s egotistical need to prove his superiority, and thus they are poisoned and useless. Feeling under-appreciated, Aydin trumps up a business trip to Istanbul, in essence running away from home and punishing these ingrates by denying them the pleasure of his company.

Thus Winter Sleep completes its long narrative journey. In a mystical landscape best suited for hobbits, Ceylan treats us to his own oddly un-triumphant return of the king. Winter Sleep is a film that demands a hefty commitment from its viewers, but in return offer rewards and riches uncommon in cinema. While it has been described as Ceylan’s masterpiece, I personally hope for many more sojourns with this uniquely talented filmmaker. But until those come along, the exquisitely fevered dream that is Winter Sleep will tide us over nicely.