In celebration of Independence Day, we present this moldy oldie from 2012. 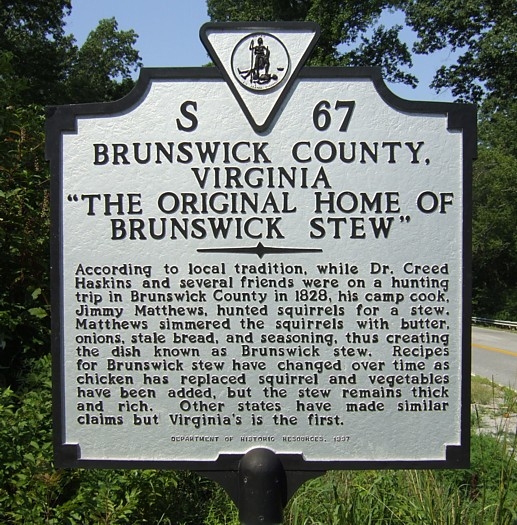 A couple weeks ago, I wrote about my Dad’s Woodmen lodge and the planning of their annual Fourth of July stew sale. I thought I should go into a little more detail on this customary delight. Brunswick Stew is a culinary tradition in rural Southern Virginia. It is also popular in parts of North Carolina, Georgia and Kentucky, where it is known as “Burgoo." Both Georgia and Virginia have counties named Brunswick, and both places claim to have invented it. It's a controversy that will never be solved to everyone’s satisfaction, just as there will never be an officially accepted “best recipe” for the dish. Ingredients vary from stew chef to stew chef, but the recipe below is fairly typical:

About 70 squirrels, cut up


I’m happy to report that squirrels are no longer used, although there are theories that Brunswick Stew originated in the 1800’s as a way of making the arboreal rodents palatable. One ate what one could find in those days, and some very old recipes advocate serving the stew with chopped acorns on top as a garnish. The folks in this picture are probably fixin' to seriously chow down on some squirrel based stew. 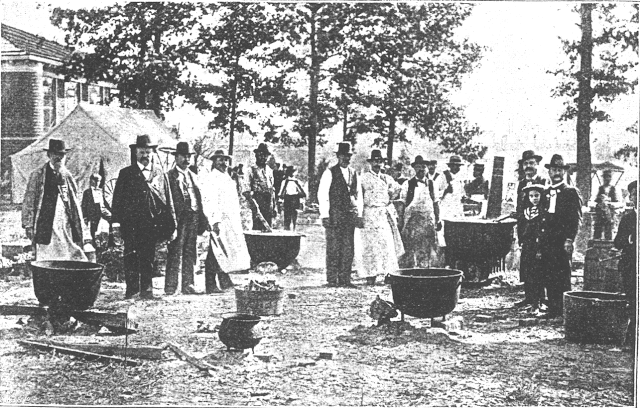 Chicken is the meat of choice these days, deboned and skinless in a nod to health concerns, although some old timers will try to slip a few chunks of fat back into the pot when no one’s looking. The cooking technique is simple, provided one has the specialized equipment and a small army of assistants. Basically add all the ingredients in a large - and I do mean large - cast iron pot of at least 35 gallon capacity (50 if you’ve got it). Then you make a wood fire under the pot, bring the stew to boil and stir for 4 to 5 hours until all the ingredients disintegrate, or “cook up” as the stewmakers call it. You should be left with an orange colored, thick and gooey melange, with only the occasional shred of chicken or kernel of corn as evidence of the dish’s components. 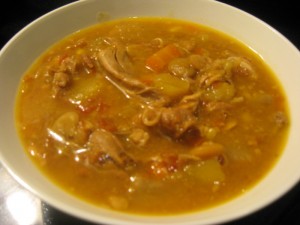 The trick is to keep the fire hot and the pot stirred. Back in the 1960's when my Dad worked on stir patrol, he would cut a tree limb about 8 feet long and 4 inches in diameter, preferably from a sturdy oak. He would then skin off all the tree bark, leaving a pristine and formidable stew stirring device of unrivaled efficiency. 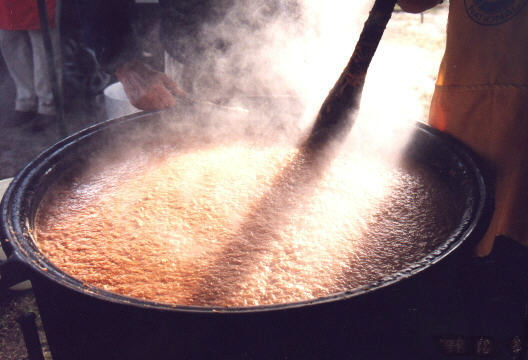 On July 4th, folks would begin to gather at the Woodmen camp about 11 o’clock, ravenously hungry and eager to sample the concoction. Farmers would set up their wagons and trailers for use as makeshift picnic tables, often with the stray tobacco leaf or trace of dried cow manure providing an earthy ambiance. The idea of eating piping hot stew outdoors in the middle of a steamy Virginia summer may seem counterintuitive, but eventually the diner’s natural air conditioning begins to kick in. I suppose it’s similar to the Italian tradition of consuming hot beverages on blazing afternoons; once one’s internal temperature is sufficiently raised, the surface of the sun seems cool in comparison. In short, we sweated while we ate, streams of perspiration serving as visual evidence of culinary bliss.

The Woodmen still produce their famous mid-summer delicacy, although there have been a few changes over the years. Boat oars are now used for the intense stirring, in deference not only to ergonomics but to our few remaining mighty oaks. Folks don’t hang around and sit at tables encrusted with agricultural detritus anymore, preferring to purchase the stew in to-go containers to enjoy later in the comfort of their air conditioned homes. The sale no longer occurs precisely on Independence Day but is now held the prior Saturday. The Woodmen have adopted a flexible schedule that avoids competition from local parades and allows its members to enjoy the Fourth with their families at the beach; a decadent luxury unthinkable when the stew tradition began. 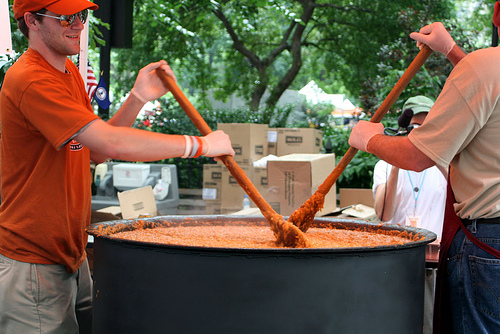 In case you’re wondering if the splendors of Brunswick Stew can be replicated by the home cook, the short answer is no. The internet is jam packed with Brunswick Stew recipes, all promising to render delicious results. The ones I have tried make a fine vegetable soup at best, with none of the magical, viscous alchemy that elevates Brunswick Stew to the level of iconic cuisine. It’s simply a matter of physics. A typical home cooktop is not going to generate the blast furnace heat required to alter foodstuffs at the subatomic level. Your overpriced stainless steel stockpot may bear the autograph of a famous Food Channel personality, but it’s not going to conduct heat like an enormous, well seasoned cast iron vessel. Your tightly insulated kitchen doesn’t permit the balmy, humidity tinged breezes of a cloudless Southern morning; vapors that give the mixture a sultry majesty.
I
Worst of all, your stew will not have been prepared by kind hearted, hard working men who would rise at 3 AM on a major holiday to pluck chickens and pick home grown vegetables by the glow of a summer moon. They did it out of love: love for tradition, for family and for community. That generation of men are all gone now but, despite a few allowances for modernity, the tradition still continues. While we become ever more polarized and fragmented as a nation, amazingly there’s still one thing all can agree on: the taste of Brunswick Stew on a hot summer day is proof of angels among us.