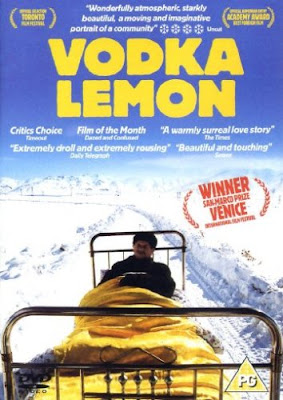 Reviewed by Shu Zin
Oh my goodness, what an enthralling, delightful movie! I can’t think why I didn’t pick up on this quirky little sleeper before. VODKA LEMON is set in the most exotic and unfamiliar setting – a frigid Armenian village, after the Soviet Union has fallen apart – and is peopled with Armenian Kurds in desperate straits. The first big surprise here is the sophisticated and brilliantly stark cinematography, and the perfect pacing. Masterful direction by Hiner Saleem, and the actors, especially Romen Avinian, weave their magic effortlessly.
There’s a lot of absolutely deadpan humor, too, often somewhat grim, shared with and embracing some extremely touching moments. And a subtle, hilarious moment, when sheep jostle each other to observe a young woman dressing. The score is terrific, notable for its restraint and variety, and it works just, well, what can I say? It works perfectly!
What is this film about? It is about Hamo, a poor widower, whose son has emigrated from the snowy land to France. When this son fails to send any money back to his dad, after consulting with his dead wife, Hamo decides to sell the family wardrobe. What follows allows us a peek into the social mores and ethic of this foreign place. And, heartbreakingly, what follows is the sale of the television set. What is this film about? Surprise, surprise! It is a romantic drama, set in a landscape of ineffable snow, where love advances by baby steps in a glacial cemetery and on a country bus. Sexual politics are highlighted, in a small way. Every single action in this film is significant. My only complaint is that the songs were not translated in the subtitles. It is a wonderfully engaging film, highly recommended by Shu Zin.
at December 18, 2011

This sounds very good - will give a whirl me thinks. Thanks and Happy Christmas by the way :)

All the best, Will

Many thanks Will. One of the many splendors of the internet age is the opportunity to connect with talented and wonderful people. Best wishes to you and your loved ones for the holidays
David

David - You got that so right! I'm wishing you and yours the very best and...I'm from the rambunctuous Merry Christmas crowd, so heaps of merry on ya. Cheers! Shu Zin aka Soozin