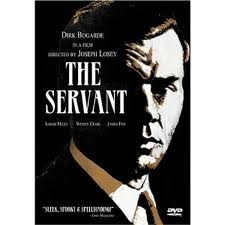 Reviewed by Shu Zin
When I first saw THE SERVANT in the late 60s, I was about 20, and I thought this was at once the most brilliant, sickest and disturbing film I’d ever seen. I watched it again yesterday; it has stood the test of time, and it is much more accessible now, due to my own maturity and life experience. It is completely compelling, providing a frightening and rewarding cinematic adventure that marches fearlessly into taboo psychological territory. 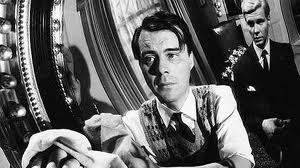 The story is of Tony, a self-indulgent, insecure and slightly ridiculous young Englishman who seeks a full-time, live-in manservant to help him in his chic new apartment in London. Dirk Bogard, as the obsequious Hugo Barrett, applies for and lands the job and, upon his arrival, an exchange of power begins, subtly at first, and gathering sickening momentum as the film progresses. James Fox, in his debut starring role as Tony, crumbles and disintegrates at the hands of a master manipulator, in spite of Susan’s (his prim, astutely observant fiancée, played by Sarah Miles) efforts to stop the degrading process she recognizes and correctly assesses. 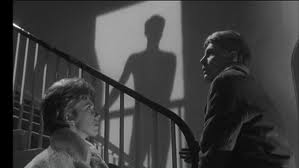 I had forgotton that Dirk Bogard took over the direction of THE SERVANT when accomplished director Joseph Losey got sick in the middle of the production. The transition is seamless. The acting by Bogard, James Fox, Sarah Miles and a remarkable Wendy Craig is nec plus ultra, and the writing, by Harold Pinter, intelligent, articulate and powerful. The black and white cinematography and unexpected pacing are mesmerizing. There is not another movie like this one on the face of the earth, and while it does bring to mind some aspects of Roman Polanski’s REPULSION and, to a significant, but lesser, degree, John Huston’s REFLECTIONS IN A GOLDEN EYE, it remains entirely fresh and original today, an amazing 48 years later. This subtle, riveting film is, indeed, one of the best and most original of all time.