Fans of somber, hard-nosed police procedurals will find much to like in Jar City. Set in Reykjavik and environs, director Baltasar Kormákur lays on the Icelandic atmospherics with a trowel, and every scene is washed in a cold and forbidding blue-green patina. 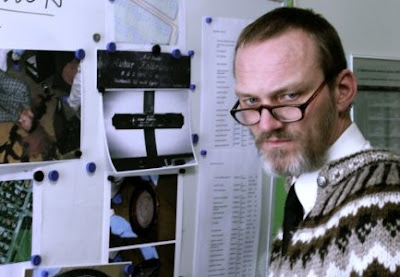 While these events are seemingly unrelated, Erlundur uses an old photograph found at the victim’s home to methodically trace a web of violence and corruption back 30 years to the jail cell of a notorious sociopath (Theódór Júlíusson), whose decades in prison have made him old and flabby – but no less dangerous.

But all is not treeless landscapes and bleak gray skies, as Jar City has its moments of earthy humor and eccentricity, and Erlundur’s relationship with his young partner Oli (Björn Hlynur Haraldsson) provides many of them. Oli, trained in America, clearly considers himself a sophisticate and Icelandic cops clueless rubes; a misconception Erlundr crustily dispels at every turn. And then there’s the mercifully brief glimpses into rustic Icelandic cuisine which, suffice to say, is not a threat to French or Italian.

In fact, munching on any kind of snack while watching Jar City is an activity only for the hardy, as Erlundr’s ongoing investigation necessitates the exhuming of long dead bodies, numerous autopsies and an eerie visit to the crime lab’s formaldehyde vault, where human organs and body parts float like grotesque pickles in cloudy containers. 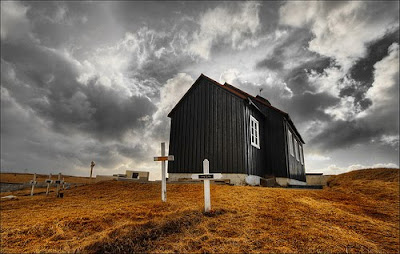 Jar City ultimately rises above typical detective fare due to the strength of its characters and clever writing, aided greatly by Iceland’s gloomy sense of light and space. It’s great fun to watch this undermanned (an apparently unarmed) police force tackle difficult and dangerous situations with a stoic sense of resolute duty. And through Inspector Erlundur’s world weary eyes, we see how a contemporary version of original sin may bear deadly fruit for generations to come.

The look and description here remind me of the original Insomnia. Which I liked quite a bit. Need to see this.

This is a film I definitely would like to see. I didn't recognize it at first, but this film must be an adaptation of one of the detective novels by Arnaldur Indridason. With Henning Mankell, Liza Marklund, Unni Lindell and perhaps Stieg Larsson he belongs, in my opininion, to the absolute top of the recent Scandinavian wave of very exciting crime literature. Recommended for your vacation. And as I said, I would love to see this film.

Lemmy: Yes there are similarities to Insomnia, a film I also enjoyed. Jar City is playing on Sundance Channel occassionally. I DVRed it from there. thanks

Bob: Yes it is from an Indridason novel. I am unfamiliar with his work (I'm not much of a reader these days) but I am planning to go to the library this week and see if they have any of his books. My vacation starts next week, and I agree with you, these novels sound like the perfect thing. A good crime novel is hard to beat. Thanks for the other names too.

I started to watch this movie but I couldn't finish it... I don't know why, but I got really bored during the first part. I guess if you reckon that it is a good movie I shall give it another chance to enjoy it! Sometimes, depending on my mood, I cannot stand some movies; but once I watch them again, I change my mind. :)

Regarding books, I do recommend you the Italian book "The solitude of prime numbers" by Paolo Giordano: it's an amazing novel and I think somebody is trying to adapt it into film.

Thank you Mieria, I hope it goes better a second time. I'm kind of a sucker for detective stories, so maybe that's why I enjoyed it so much.

I looked up "The Solitude of Prime Numbers" and you're right, a film is being made of it, starring Isabella Roselinni. Sounds really interesting. Thanks for the tip.