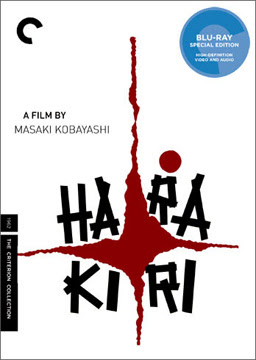 Masaki Kobayashi’s Harakiri is an elegantly told, parabolic tale of hypocrisy, class struggle and revenge. In fact, the film will likely remind today’s viewers of the work of Quentin Tarantino, as Harakiri is filled with nail biting tension, sudden, shocking violence and a richly layered narrative that slowly, at times painfully, peels down to its bare, heartbreaking substrate. The film transports its audience into a swirling dream that combines the meditative with the nightmarish, profound love with immeasurable hatred, and confuses perversion with sacrament. Along the way a new, flexible definition of honor will be devised to justify the application of a new, overwhelming force. And the death rattles of a proud, ancient martial culture will be silenced by the situational ethics of a new, expedient age.

Set in Japan in the early 17th century, Harakiri is the story of wandering ronin – unemployed samurai – rendered redundant by the emergence of a nascent national government. In the interest of peace, many local warlords have been stripped of their holdings, and are now unable to support the large private armies that secured their lives of opulent privilege. These once revered, highly trained warriors now face obsolescence and starvation, and attempt to provide for their families by menial labor and outright scavenging. But for some samurai the frustration of penury is intolerable, and they combat it by a clever method of extortion: showing up at a rich man’s estate requesting permission to commit seppuku - ritualized suicide by disembowelment – in the courtyard. Rather than endure a bloody spectacle, the landowner would often pay the starving samurai a few pieces of silver to simply move on to the next mansion.

On a fine May afternoon, a samurai named Tsugumo (Tatsuya Nakadai) attempts such a gambit at the estate of the Iyi Clan. Clan elder Saito (Rentaro Mikuni) questions Tsugumo’s sincerity, and illustrates his skepticism by telling the ronin about an unfortunate recent event. A few days prior, a lost samurai named Chijiiwa (Akira Ishihama) appeared at his gate requesting similar permission, but when Chijiiwa’s treachery was revealed, Saito’s top lieutenants Omodaka (Tetsuro Tamba), Yazaki (Ichirô Nakaya) and Kawabe (Yoshio Aoki) decide to make an example out of Chijiiwa and sadistically compel him to complete the horrific ritual, with only a dull knife to ensure maximum suffering.

Kobayashi presents the gruesome story of Chijiiwa in flashback, with a level of detail not for the squeamish. But his aim is not merely grim prurience, but a careful setting of the table for this tale’s surprising narrative twists. The “story within a story” format was popular with Japan’s scriptwriters of the post-WWII period, drawing an effective cognate between cinema and the oral history tradition. When Tsugumo commences his own suicide ritual, Kobayashi repeats stagings and compositions from the Chijiiwa sequence, creating an eerie sense of dreaded déjà-vu. But in this go around the Iyi courtyard will be a setting for much more than bloodletting, as one scruffy, grief stricken samurai will champion an entire society, while extracting a measure of revenge from a brutal oligarchy that thrives on intimidation and hypocrisy.

Harakiri is awash in clever visual symbols. An empty suit of armor stands as a totem to the rationalization of evil, and evokes the violent impulses inherent in religious zealotry. An epic swordfight takes place near a crowded cemetery, as howling winds, storm clouds and ornate headstones bespeak the futility and suffering wrought by centuries of human conflict. Kobayashi equates innocence and tranquility with gently falling snow and breeze-tossed cherry blossoms, but these peaceful moments exist only in the memories of his characters, as a darkening world of codified Social Darwinism offers only humiliation and slow death to those on the losing side of history. The Iyi Palace features long hallways that seem to recede to infinity, yet its secret rooms and rice paper walls are insufficient to fully conceal its foul abominations, and Tsugumo’s desperate struggle will ultimately reveal every layer of hidden rot. But the purest motives are not enough to prevent a rewrite of history. And 400 years ago, just like today, historical revisions always serve the interests of the well connected.

The transfer is in the original 2.34:1 ratio, giving Kobayashi and DP Yoshio Miyajima an exceptionally wide cinematic canvas. The film appears to have a very fine overall layer of grain, but it’s not excessively distracting for a b/w production of this vintage. The transfer is remarkably clean and sharp; perhaps too sharp as the edges of the skullcap appliances on Kobayashi’s actors are clearly visible in several close ups. The black levels are nicely packed and the gamma is shifted slightly dark of center - highly appropriate for this subject matter. The principle lens appears to be an anamorphic zoom, as there’s some noticeable barrel distortion when panning on the wide end. In all though, the disc is a pleasure to look at, and a worthy vehicle for Harikiri’s exquisite compositions.

The audio is in LPCM mono and it’s quite crisp and clear. The unusual instrumentation employed by composer Toru Takemitsu will give you goosebumps, and Tatsuya Nakadai’s deep, guttural line readings resonate with power.

Video introduction by Japanese-film historian Donald Richie
Here, Richie adds a valuable historical context that will greatly enhance one’s understanding of the complex social dynamics at play in Harakiri. He also offers a wealth of possible interpretations of the film’s symbols and subtext. This segment is an indispensible 12 minutes, but be advised that Richie’s commentary contains significant spoilers.

Excerpt from a rare Directors Guild of Japan video interview with director Masaki Kobayashi, moderated by filmmaker Masahiro Shinoda
Disappointingly, Shinoda does most of the talking here, while Kobayashi just nods in approval. There are a few interesting gems, as Kobayashi describes his relationship with art director Shingemasa Toda and composer Takemitsu. The film’s reception at Cannes is discussed as well as the director’s Human Condition trilogy. Overall, it’s a rather skippable 10 minutes.

Video interviews with star Tatsuya Nakadai and screenwriter Shinobu Hashimoto
This supplement is broken up into two segments. The first, entitled A Golden Age, features the recollections of leading actor Tatsuya Nakadai on the making of Harakiri. Nakadai discusses his intimidation at tackling a role that seemed tailor-made for his idol Toshiro Mifune. The physical rigors of the shoot are examined, including the choreography of the combat scenes (using real swords and spears!) and the stress of having to kneel in the formal seiza position for weeks on end.

Masterless Samurai completes the supplement, and is an extensive and quite humorous interview with writer Hashimoto. He describes how the idea for Harakiri had haunted him for sometime, and he was finally inspired to write the script from a movie poster he saw at Cannes. Originally intended as a project for Kurosawa, Hashimoto’s relationship with Kobayashi was contentious at best. In fact, the tension between the men was mirrored in the performances of the actors, giving the film additional emotional depth. At a total running time of 28 minutes, these interviews will be of interest mainly to scholars of Japanese cinema.

Trailer
The original trailer from 1962 is included, but it’s from an unrestored print so you’ll have to weather a few scratches. The teaser is well edited, and does a reasonably accurate job of presenting the film’s central conflicts. It leans a bit too much on the film’s relatively brief swordplay, and theater-goers who were expecting an action extravaganza were likely disappointed.

A booklet featuring an essay by film scholar Joan Mellen and a reprint of Mellen’s 1972 interview with Kobayashi
This 32 page edition contains film stills, production credits and two interesting articles by Joan Mellen, a renowned expert on the cinema of Japan. Her interview with Kobayashi offers many reflections on his long career, including his struggles with censorship and his affection for Charlie Chaplin. The booklet is attractively designed and of the high quality we’ve come to expect from Criterion.

In these days of citizen protest and Wall Street occupation, this film from 50 years ago rings with the frustrated, desperate vibrations of the downtrodden and forgotten; oddly in sympathy with the current zeitgeist. As Kobayashi makes abundantly clear, the greatest enemy of the ruling elite is not a phalanx of sword wielding samurai, but a working class unwilling to submit to false notions of honor. In this strange new world of ideas, the true power of a warlord - or a corporate CEO - is not measured in land and riches, but by his ability to suppress the truth. Harakiri teaches a valuable and haunting lesson to corrupt souls who prey upon the powerless: those with nothing to lose also have nothing to fear.