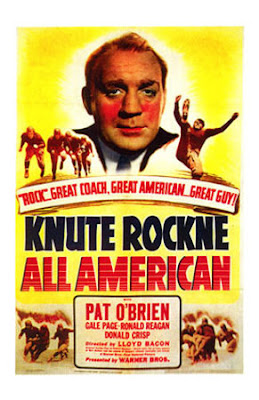 Knute Rockne All American is a fine example of Hollywood’s unique ability to transform the famous into the legendary through the forceful application of kitsch. Pat O’Brien stars as the innovative coach who molded Notre Dame into a gridiron powerhouse and, as a result, made the game of American football a distinct endeavor, and not just a slightly more controlled version of Rugby.

We follow the life of Rockne from his childhood days as the son of earnest Norwegian immigrants growing up on the tough streets of Chicago at the turn of the century, to the years he spent as a postal worker to save money to pay for his college tuition. This bootstrap backstory is dispensed in a pleasingly rapid manner, with just the broadest of brushstrokes. Not surprising since director Lloyd Bacon built a career by streamlining bulky, complex stories into easily digested chunks through a muscular style of highlight reel impressionism; a style that was perfect for the wants and needs of Depression era audiences. 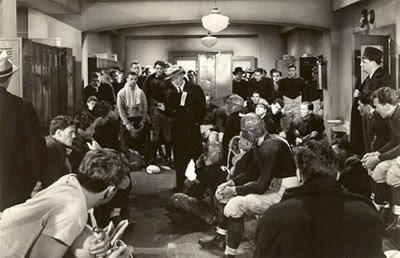 Once matriculated at Our Lady, the whip-smart Rockne soon becomes the darling of the chemistry department, where he is offered a fellowship. But the Rock’s true love is the pigskin, and his ability to teach the finer points of the game to the school’s young recruits has earned him a competing offer to coach football.

The film’s most notable supporting actor, Ronald Reagan, soon makes his appearance as George Gipp, an athlete whose immense talent is only matched by his extreme arrogance. Rockne adapts his system to feature Gipp’s extraordinary abilities, and soon Notre Dame is on its way to national recognition. But the Gipper’s heroics would be short-lived, as a strep throat would claim his young life and, as a result, supply plenty of inspirational fodder for his coach’s halftime speeches. 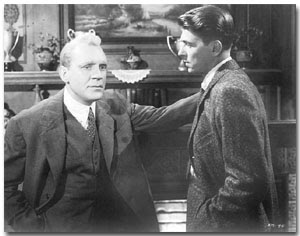 Reagan’s performance as Gipp is really quite remarkable. When first introduced, Gipp has an icy cockiness that runs completely counter to his physical persona. Indeed, Reagan draws attention to himself by being the only actor here who is essentially underplaying. His soft-spoken but extremely confident characterization is a welcome break from the breathless whirlwind created by Bacon’s storytelling and O’Brien’s chain-saw line readings.

Pat O’Brien was typical of the tough, no-nonsense leading men preferred by Hollywood until the 1950s. Along with his good friends Spencer Tracy and James Cagney, O’Brien was part of a Midwestern-bred triumvirate of talents who acted chiefly with their voices. Lines of dialogue were not bits of poetry to be subtly caressed, but vital information to be tersely and clearly delivered. O’Brien attacks the playing of his character the way Rockne attacked opposing defenses, with a slashing, speedy – but impeccably enunciated - vocal staccato. This school of acting was the antithesis of the Method; characters were not hidden in the deep, murky folds of the text, but were born straight up and fully developed by the bottom of page one. 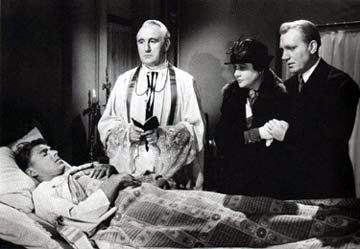 Oddly, O’Brien’s style fails to fully capitalize on one of the film’s iconic moments, the famous “Gipper” speech that sparked Notre Dame’s miraculous comeback against a superior Army team in 1928. Rather than inspiring, O’Brien tones down his sharp barking and seems strangely disconnected, as if he’s reciting a grocery list or giving directions to a lost motorist. O’Brien’s scene has become a bit of historic cinema but, as is often the case in the movies, its legend is superior to the actual event. Leslie Nielsen’s famous parody of the speech from the movie Airplane is actually much more effective at creating a feeling of rah-rah-rah. 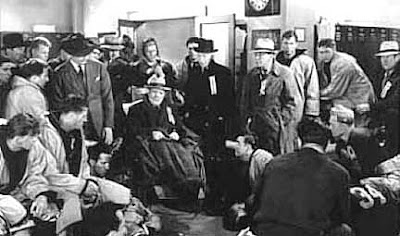 The film glosses over Rockne’s real-life blunders and shameless publicity seeking - he once abandoned his team on game day to attend an awards ceremony in New York – but such foibles are not the stuff of legend. Like the best classic cinema, Knute Rockne All American gives us a glimpse into not only the characters and events it depicts, but also the zeitgeist under which it was made. In 1940, America was starting to emerge from economic upheaval but the nation was still young with much to prove and, like Notre Dame Football, yearned for recognition on a larger stage. And America, like Rockne, was trying to build a winning program from scratch. We needed all the George Gipps we could get.

Excellent review. Interesting what you tell about the change in acting style among Hollywood stars at the time, and how Ronald Reagan sort of came in between.

Yes, compared to O'Brien's formal oratory, Reagan seemed to be mumbling Brando-style. His appearence is brief, but it was an interesting performance. Thanks
Bob