Histrionics in Harper: The Stranger (1946) ✭✭✭ 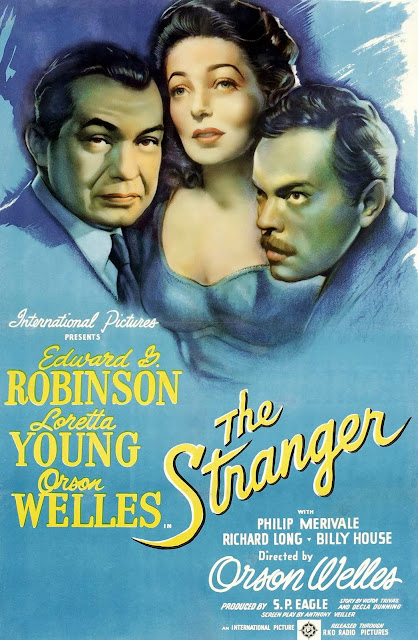 The leafy lanes and tidy clapboard houses of a Connecticut village hide a monstrous evil in The Stranger, Orson Welles’s flirtation with hired-gun hackery from 1946. Made a mere 5 years after Citizen Kane, The Stranger is a film notable mainly for its cynicism. To producer Sam Spiegal, who appears in the credits as S.P. Eagle, it was an attempt to cash in on the horrific revelations from the recently liberated Nazi death camps. To director/star Welles, it was a last chance at Hollywood redemption. 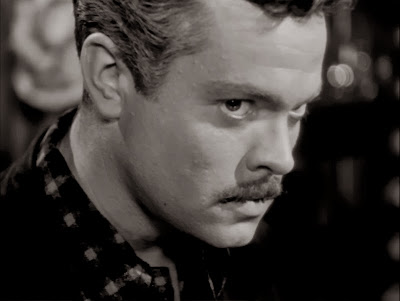 At the time, Welles was the classic cinema enfant terrible; a young creator of brilliant, critically acclaimed films that, just like today, were largely ignored by the public. Welles had quickly built a reputation in the industry as an arrogant egomaniac whose products, while peerless artistically, drove studios to the brink of insolvency. With the world, and the movie business, returning to a state of relative normalcy after WWII, Welles faced a career dilemma: profit or perish. 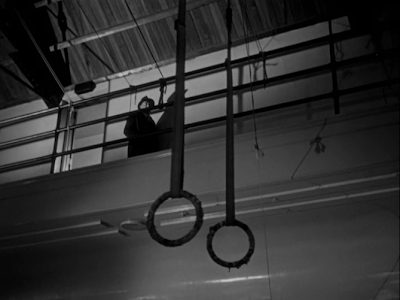 As a concept, The Stranger seemed a perfect match for the zeitgeist. Penned by Victor Trivas, a pacifist German filmmaker who spent the better part of two decades hiding from Nazis, the script reduced the horrors of the holocaust to a simple detective story; a popular and familiar genre to the audiences of 1946. On the surface, the story appeared a perfect match for Welles – the pride of Kenosha, Wisconsin – and his unique sensibilities: sunny Americana threatened by a shadowy foreign malevolence lurking in our midst. Welles was one of the first to see concentration camp documentary footage and was so deeply moved by the experience he enthusiastically signed on to the project. But there was the caveat that this film, unlike Kane and The Magnificent Ambersons, was to have wide appeal and not a typical Mercury Theatre offering for those of eclectic, high brow taste. Edward G. Robinson portrays Mr. Wilson, a government investigator and leader of an international group charged with bringing fascist war criminals to justice. He follows an escaped, low level S.S. functionary named Meinike (Konstatine Shayne) across the Atlantic in hopes of nabbing a much bigger prize: death camp architect Franz Kindler, conceiver and implementer of Hitler’s final solution, who has thus far eluded capture. Surprisingly, Meinike’s trail leads to the sleepy hamlet of Harper, Connecticut where it abruptly and mysteriously ends. Desperate for clues, Robinson poses as a visiting antiques dealer and begins to mingle with the local populace. He eventually meets a history professor named Rankin (Orson Welles), a recent hire at the Harper School for Boys and newly married to Mary Longstreet (Loretta Young), a product of one of Harper’s leading families. At first, Rankin seems above suspicion. But slowly Robinson begins to see through Rankin’s façade, and becomes convinced this tweedy, soft spoken school teacher is actually the fiendish Kindler in disguise. 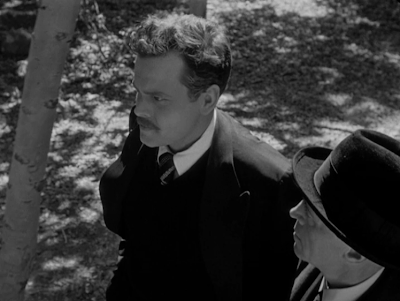 Welles’s patented visual style drives the film in the early going, complete with low angle cameras, inky shadows and deep, ceilinged sets. Robinson’s establishing scene, a meeting with other Nazi hunters, features blocking nearly identical to Kane’s famous projection room sequence. In an inspired bit of visual cleverness, Welles has Robinson break his pipe in a fit of pique and the hastily repaired, taped-over smoking apparatus becomes an important visual identifier as the story progresses. Along a wooded trail, Welles has a secret meeting with one of the main characters, and the lengthy dialogue is covered in a single beautifully choreographed take. It was a technique Welles would work to ambitious perfection 12 years later in Touch of Evil, but here we see the genesis of his fascination with camera-subject ballet. 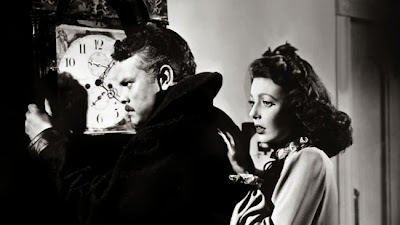 Welles was an underrated director of actors – every actor but himself – and here he assembles a nearly perfect cast of archetypes, ranging from elegant landed gentry to busy-body small town rubes. Loretta Young, given a truly difficult and thankless role, has to walk a tightrope between starry-eyed incredulity and abject cluelessness, but amazingly she pulls it off. Crusty vaudevillian Billy House, as soda fountain proprietor Mr. Potter, is a joy to watch as a dodgy know-it-all who keeps an eagle eye on the town’s business from his storefront window. And Robinson, known primarily for riveting interpretations of gangsters, is superb as a crusader driven by an unquenchable thirst for justice. 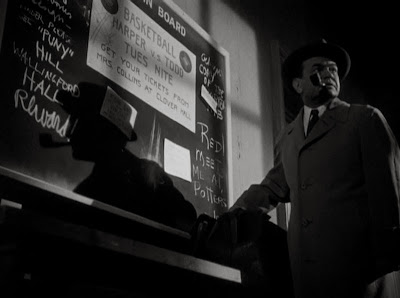 Among the actors, the only weak link is Welles. His turn as Rankin starts with interesting subtlety, evoking the whispered edges of veiled secrets. But, much like the film itself, his performance eventually teeters over the edge and onto a chilled platter of diced ham. As the cat-and-mouse game between Wilson and Rankin mercifully races to conclusion, the film loses its unique Wellesian visual luster and becomes just another noir thriller. A spooky clock tower, Harper’s civic landmark and prominently featured throughout the story, becomes both a deadly trap and a setting of Hitchcockian grandeur for the film’s baroque and inflated finale. When all is said and done, the audiences’ sense of relief appears to be shared by Welles himself, as bits of scenery dangle from his pearly bicuspids. 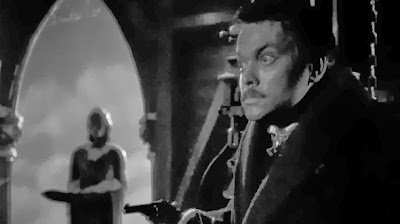 For Orson Welles, The Stranger accomplished its objectives; it entertained and it made money. In fact, it was the first Welles feature to turn a profit on its first run and it got an Oscar nomination for best screenplay in the process. Welles would survive to direct another day and eventually, after a few misfires, create such brilliant works as Touch of Evil and Chimes at Midnight. But despite his heroic attempts to elevate this melodramatic potboiler, Welles is out of his element here and it shows. Still, The Stranger is a must-see for Welles fans and completeists. And it’s a vivid reminder of just how challenging it was to find a script that actually deserved him.

I love me some young Orson! Like Marlon Brando, the later years... not so much.

Never saw this film, but the subject and atmosphere remind me of The Third Man, in which Welles was really great as double-faced Harry Lime. Although he did not direct that film, The Third Man has the Welles touch.

I recently bought this at a gargage sale and can't wait to finish it. I'm not so much a Welles completest as I am a Robinson completest. Wildly underrated actor, Edward G. Robinson was.