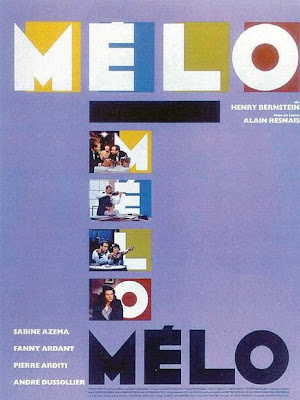 You just never know what Alain Resnais is going to come up with next. Over his long career – in excess of 60 years – he’s created everything from the powerful holocaust documentary Night and Fog, to the one of the most pretentious, impenetrable - and downright prissy - films ever made, Last Year at Marienbad. His most recent emission, 2009’s Wild Grass, came very close to be being a fascinating and seductive romance, only to shatter its own spell with some very strange casting and a truly WTF ending. But these misfires are not really mistakes; I have a feeling his films turn out exactly the way he plans. That wacky Al; he’s such a card.

With Mélo, Resnais seemed to be throwing it all back in his critics' faces. “You want me to stop being creative and just make movies like everyone else? OK, try this on for size!” cried the beleagured director. Mélo is a pot boiling melodrama, pure and simple. Adapted from a play written in 1929, it’s overblown, overwrought, overworked and, by about 20 minutes, overlong. Its narrative structure closely resembles an opera libretto, with a slowly simmering exposition that finally gives way to betrayal, attempted murder, suicide and wrenching remorse. The only thing missing is a hefty Viking woman in full regalia. 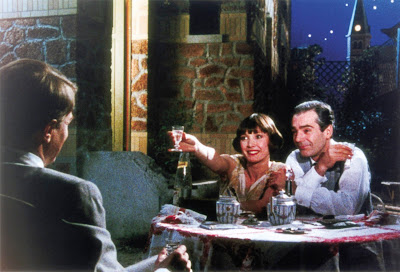 Mélo deals with an exceptionally tortured love triangle, consisting of Marcel (Andre Dussollier), a world famous violinist pining for a lost love, Pierre (Pierre Arditti), a childhood friend of Marcel who had to settle for a career as a music teacher, and Pierre’s wife Romaine (Sabine Azema) whose attractive free-spiritedness hides a questionable grip on reality. Backed by intentionally stagy sets, the trio talk themselves blue in the face in the first act – it’s sort of a Rohmer film without the charm – and lay the dramatic groundwork for the gooey maelstrom that follows. 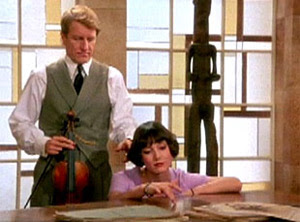 Dussollier gets high marks his efforts here – apparently he missed the meeting where everyone else was informed the film was a parody – and somehow he keeps a straight face and a genuine conviction. His innate elegance and charm pegs him as a sort of latter day Ray Milland, and he pursues his task with admirable fortitude. Azema has neurosis down pat - she plays a similar character in Wild Grass - and here she becomes the embodiment of every amateur theatre director’s idea of a dangerously hot leading lady. Resnais took a film that showed some early potential and, by injecting the tritest elements imaginable, made it a wobbly weeper. Like many directors, he’s either a talentless hack or a cinematic genius. And at the age of 89, he’s earned the right to be whatever he feels like being. I lean towards the genius side of the spectrum, although at times he’s made it awfully hard to defend that position. As an achievement of a director’s objectives, Mélo should get 5 stars. As a film to actually sit and watch, a rating of 2 is charitable. And I’m sure that’s exactly as Resnais planned.