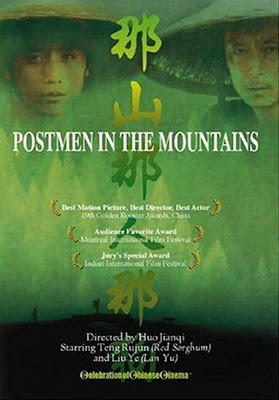 Postmen in the Mountains is a film that outwardly seems as simple and straightforward as its title, but within its rustic layers is a deceptive emotional depth. In this tale of transition, a middle-aged mail carrier (Rujun Ten), facing retirement due to declining health, prepares to hand over his route to his estranged 24 year old son (Ye Liu). Accompanied by their faithful German Shepard Lao’er (who nearly steals the picture) the two men embark on a three day journey over the rugged mountains of Hunan province as the father shows his son the ropes. 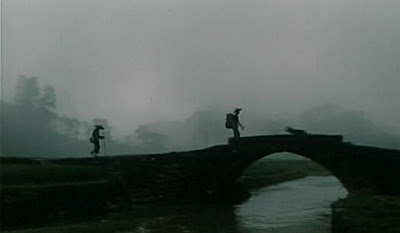 The route takes them to several isolated villages, where life appears to have changed very little over the past century. With no connecting roads, these hamlets depend entirely on the mail for contact with the outside world, and the postmen are often welcomed as heroes. Along the way, father and son learn a great deal about each other’s character, and wariness turns to warmth and respect. The father goes above and beyond the call of duty in service to his far-flung patrons, getting involved in their personal lives and even creating correspondence to spare the feelings of a lonely and blind widow. 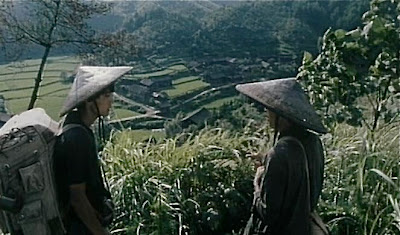 Director Jianqi Huo approaches the film as a sequence of poetic scenes, building by subtraction. His use of flashbacks avoid the usual trope pitfalls and become an uncluttered method of exposition, leaving his main duo free to quietly experience the simple wonders of the here and now. Huo brilliantly uses Lao’er not only as four-legged companion, but a bridge that connects the men to their pasts and futures. Ultimately the creature serves as an instructor in the confounding mysteries of existence.

The disc available from Netflix is mastered from a grungy composite print - bouncy subtitles and all - and it’s a testament to the film’s power that it survives the presentation. Postmen in the Mountains is a prime candidate for a Criterion restoration and one hopes such a product is in the works. The film’s score, a sort of Eric Satie meets Carlos Nakai, adds an additional hypnotic compress and makes the few snippets of western pop music that spring up incidentally seem like garbled yelps from an unsophisticated planet. 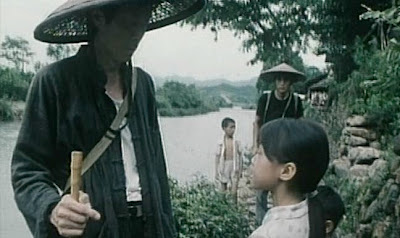 Postmen in the Mountains ran the table at the 1999 Chinese Film Awards and was Japan’s top grossing film at the box office in 2001. It is a gentle, delicate film that deals with father-son relationships and generational change with bittersweet moments of humor and empathy. And despite the film’s exotic locale, viewers are sure to recognize some of the major passages of their own lives.

I totally want to see this but have no idea where to get it. Our library doesn't have it. Rats!

You can try Netflix free for a month. Then cancel after you see it :)