The Cigarette Girl of Mosselprom (1924) ✭✭✭ 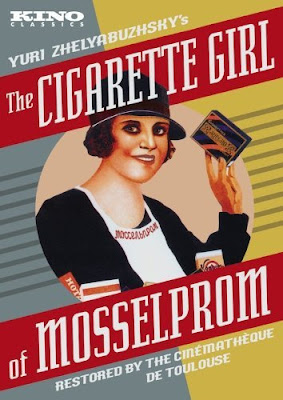 Early Soviet cinema was not all runaway baby carriages and medieval knights battling on frozen lakes as Yuri Zhelyabuzhsky’s The Cigarette Girl of Mosselprom will attest. While Western film critics celebrated Sergei Eisenstein’s revolutionary editing techniques and subjective storytelling, Moscow’s cinema goers generally preferred lighter fare – American comedies in particular – and this 1924 production was an attempt to apply the styles of Keaton and Chaplin to distinctly Russian settings. Hyperbolically billed as the world’s first romantic comedy, The Cigarette Girl of Mosselprom offers rare and intriguing flavors of life in Moscow 89 years ago, along with a sense of how everyday Russians viewed themselves and their cautious curiosity about America. 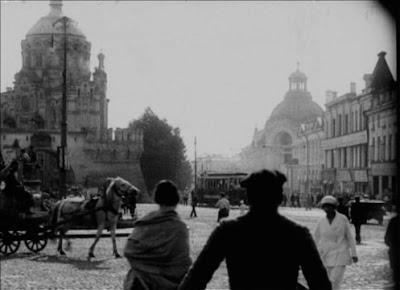 As presented here, the Moscow of 1924 featured a wide array of architectural styles, questionable construction quality and a dearth of paved streets. The sight of famous Red Square, chaotically crammed with trolleys, pushcarts and horse-drawn wagons as iconic St. Basil’s looms in the background, is the film’s most memorable image. Scenes of residential neighborhoods are a reminder that the post-revolution Russian capital was very much a work in progress; dilapidated boarding houses sit cheek-by-jowl with newly built film studios along wide, dusty boulevards. If one were to graft London with an American frontier town, the result would look something like this.

But other than historical and sociological context, the film will likely be of little interest to today’s casual viewer. Aside from a few comedic set pieces, The Cigarette Girl of Mosselprom just sort of plods along, becoming a bit tedious before all is not said and done. While only 78 minutes in duration – with a significant chunk of that devoted to title cards designed for very slow readers – the film feels much longer. After the final fadeout, most viewers will have found this sojourn in Soviet slapstick entirely sufficient, and little threat to Battleship Potemkin as the last word in Russian silents. 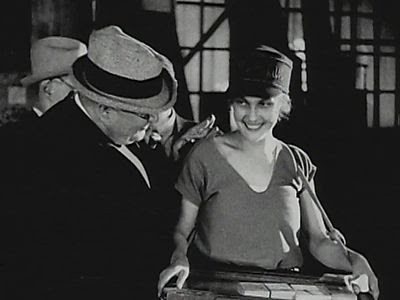 In short, The Cigarette Girl of Mosselprom is about a group of men who are passionately, and somewhat perplexingly, attracted the same woman. Whether it’s her beguiling personality, her trim figure or her budding mustache, cigarette vendor Zina (Yuliya Solntseva) finds herself hip deep in would-be suitors: Nikodem (Igor Ilyinsky), a shy, bumbling accountant, Latugin (Nikolai Tserateli), a hunky cameraman, and MacBride (M. Tsybulski), a visiting American businessman who wears his pampered corpulence like a badge of honor. Over the course of the film, all three get their shot at wooing the marginally seductive Zina, and each of them devises a different method to totally blow it. 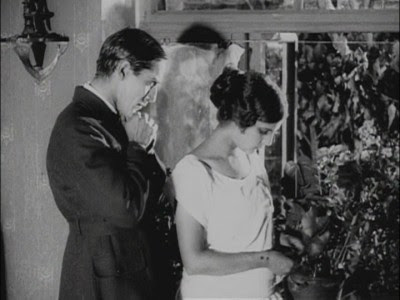 Ilyinsky, by far the best actor of the lot, delivers the film’s funniest moments. His pursuit of Zina leads him into a number of misadventures including a botched river rescue, an imaginary murder plot and several examples of public drunkenness. Ilyinsky’s gifts for physical comedy instill these segments with a Chaplinesque poignant hilarity, and his performance is one of the film’s saving graces. However, Zina clearly prefers the dashing Latugin, possibly because they both sport the same heavily larded eye shadow. But his promises to make Zina a movie star are derailed by an arrogant, sadistic director (Leonid Baratov), and her dreams of wealth and fame come crashing to the ground. 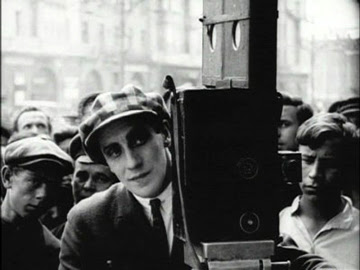 MacBride, hoping to catch the rebounding Zina, showers her with gifts and visits to fancy dress shops, but MacBride’s recent hire of the lovelorn Nikodem as an interpreter will come back to bite him in his obese tuchas. MacBride’s character serves as an amusing distillation of the classic ugly American. Complete with monocle and spats, the rotund MacBride travels the world in search of the exploitable; regarding the local citizenry as mere pawns permanently at his beck-and-call. Upon his arrival in Moscow, the weight of his assorted steamer trunks and massive personal bulk cause a carriage to suddenly and spontaneously disassemble. In a Russian populace one bad harvest away from starvation, this impressive effect no doubt caused gales of cathartic laughter. 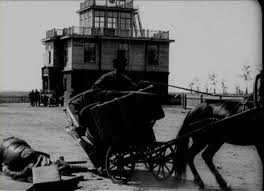 While The Cigarette Girl of Mosselprom ultimately earns three stars, be advised that this recommendation is heavily weighted toward film scholars and cinema history buffs, as opposed to a stand alone viewing experience. Moreover, those with a keen interest in living glimpses of lost times and places - in other words, cinema as archeology - should find this DVD replete with ample fascination. Slapstick has never been a hallmark of the Soviet silent film tradition, and this early attempt to emulate Hollywood on the Volga, while valuable as a curiosity, reveals infinitely more imitation than innovation. The Russian film industry of this period excelled in propaganda films laced with exciting dramatics and dynamic visuals. Rom-coms and popcorn flics, not so much.

"If one were to graft London with an American frontier town, the result would look something like this." Now THAT sounds interesting!

Yeah it's interesting purely from historical context. As a movie pretty blah.