A Couple of Fair to Middlin' Time Wasters... 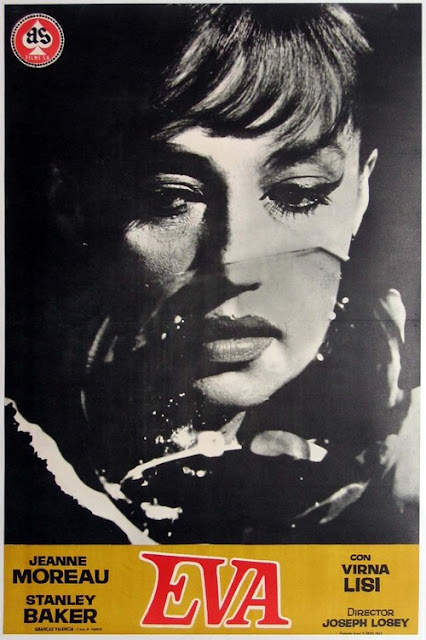 Opening with a very 60s score by Michel LeGrand that runs from ultra-cool to manic and back again, dotted with bits of Billie, EVA made me apprehensive that it would be a bad flick from the getgo. Appallingly over-exposed (or badly filmed or poor production) harbor shots. But how intoxicating to be in Venice! About ten minutes along, the production quality improves. OMG, it's a shag fur bedspread. Whether it's shoes or booze or both, Eva (Jeanne Moreau) looks like she couldn't walk a straight line if her life depended on it. Very funny. 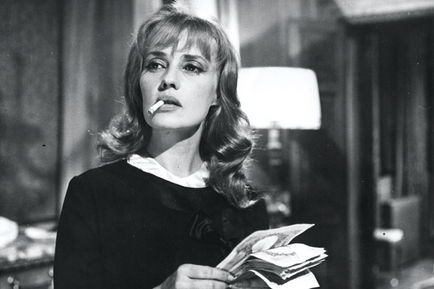 The guy obsessed with her is too cool for human consumption, an exaggerated drip of a guy, directed by Joseph Losey in a very silly mood. The story is very not really (sic), the cinematography, carefully aimed, framed and lighted. Made back in the self-conscious days when boobs and nipples were all the rage, we are treated to naughty peeks at a couple of side views, one naked nipple and a few sticking out from behind vaguely transparent blouses. All very early Eurotrash and liberated. Ultimately, this is one of the silliest of the pretentious artsy efforts of the era, and it was way too long, but I'd say see it for laffs and historical interest and the always extraordinary Jeanne M.
Reviewed by Shu Zin 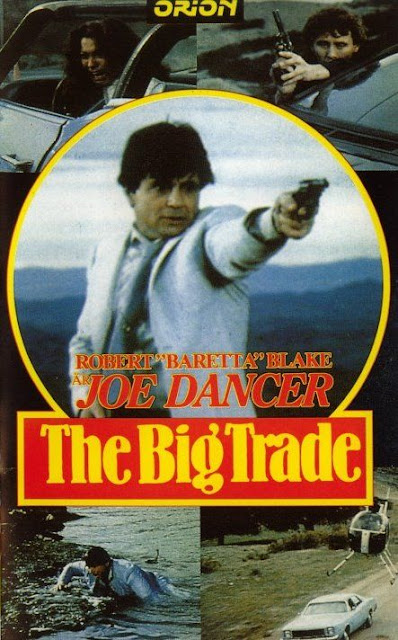 I've always considered Robert Blake a short, chunky guy with a slight hint of Donald Duck in his voice and no real acting creds since he played a crybaby in The Little Rascals. He was never convincing in any of the private detective roles he so lusted after during his career as a television actor. JOE DANCER – THE BIG TRADE, atrociously directed by Reza Badiyl, is a pilot for such a series, but no matter how jaunty the script, nor how ostentatiously he dresses on the left, Mr Blake is no Mike Hammer. This film, however, is a real gem, exemplary of the kind of silliness that dominated Hollywood and television in the 70s: nonsensical, blathering plot that makes little sense, consistently dreadful acting, a total disregard for credibility or the audience's intelligence. See it for historical interest and just to laugh at how hopelessly miscast the fat-faced little Mr Blake is as a tough private eye. Enjoy!
Reviewed by Shu Zin
at December 27, 2012

I think I'd dig the first one, but you couldn't pay me to watch the second. Seriously, with all those Dukes of Hazzard reruns out there you think I'm watching Blake Duck? HAhahahahaha! Bo Duke dresses on the left AND the right, and has the crotchbinder jeans to prove it!

Aren't boobs and nipples still all the rage? When have they not been?

March: They should have done a Dukes/Withnail mash-up episode. Painted the Jaguar like the General Lee. The mind reels...