Days of Future Passed: The Combine and the Crow: Part 1 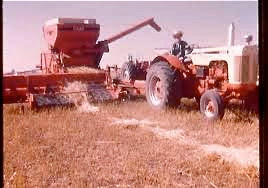 My father was a farmer, which meant that he spent an inordinate amount of time pretending to be a mechanic. Farm implements, whether they are churning up metric tons of flinty earth or slicing through acres of tough wheat straw, are subject to enormous stresses, and therefore often fail at critical moments. Or as my father would say, “Crap always breaks when you need it the most!”

He was, of course, stating the obvious, for most specialized agricultural equipment is only needed a few weeks - in some cases days - per year, and mechanical objects generally do not go on the fritz when they are sitting idle. His pre-war vintage combine, a hinky, Rube Goldberg device designed by a sadist, spent 48 weeks out of the year huddled comfortably under a nice dry shed. It was only during June’s annual grain frenzy that the rusting hulk was pulled into the sunlight where my father would gingerly coax the rickety contraption into operation.

If my father was somewhat lacking in mechanical repair skills it was due to all these exotic, newfangled gizmos that had suddenly become necessitites. When he started as a professional sodbuster, all one needed was a mule and a sharp stick to lay in an acre of tobacco and a few rows of sweet corn. And if the mule came up lame one day, one’s sturdy wife would don the harness and cultivation continued as a family affair. But as agriculture became more competitive and government programs encouraged more productivity, farms became larger and tractors were needed to produce efficiently. And with tractors came a bevy of new attachments and implements of ever increasing size and mechanical complexity.

My father was a believer in the magical power of axel grease, and he compensated for his weak understanding of machinery by brandishing his grease gun with flair and precision. He purchased the gooey unguent in 10 gallon steel buckets that - to me anyway - seemed to weigh hundreds of pounds when filled to capacity. My job was to follow him around with the grease bucket when he was in the full sway of lubrication fever; my young shoulder blades audibly cracking in strain.

In my father’s mind, before any attempt was made to waken the ancient combine from its lengthy slumber, every fitting on the finicky apparatus had to be generously larded with grease. It was a sound practice certainly - it had been almost a year since the device last wheezed with life, plenty of time for some part of the mechanism to seize - yet it was a ritual that held a deeper meaning for my father. It was part of a deal he had with God. If my father showed the Almighty that he was making an effort at the one bit of maintenance he knew how to do, then the Good Lord should respond by allowing the monstrous doohickey one more year of operation.

But Yahweh is a very busy fellow, with little time to supervise the inner workings of antique, jack-legged gadgets, and some years my father’s celestial bargain was rendered null and void before the harvest’s completion. One Saturday afternoon, with a humdinger of a thunderstorm approaching and less than an acre of wheat to go, the cursed combine began to shudder and shake and violently eject shafts of straw. With the end in sight, my father bravely tried to venture on; golden wheat stalks painfully bouncing off his back like the spears of an angry warrior tribe from a Tarzan movie. But before he reached the hedgerow, the ironclad behemoth emitted a skin crawling metallic shriek followed by a thick cloud of oily dust. Clearly, the combine had given up its ghost; raptured onto purgatory’s scrap heap. As black clouds gathered in the west and the wind stiffened, my father stared up into the darkening sky, his wet gray eyes a cauldron of anger and frustration. The King of Kings had once again welched on their deal, and I do believe this devout and saintly man had a brief glimmer, a fleeting moment, of existential doubt.

I love reading these stories about your dad. And I always attribute these specific kinds of trials to the fallen world and the work of Satan.

Thanks RH...be sure to stick around for part2 when the trials continue..

Like your nes header. I used to work at the poster department of the Dutch Filmmuseum. Someday a guy from a cinema in Rotterdam called me that there was a huge Chinatown poster at the wall there. The cinema would close and we could have the poster. So I called the paper conserrvation school and a whole class of students got it of the wall and restored it. It even was news in a national paper. Sadly, the poster is so big that the film only incidentally can present it to the public. Greetings from Amsterdam, Bob.

P.s. Where did your Killer Joe review disappear to? I liked it.

And you know I have to ask... did anyone ever run up to him while he was driving the combine and shriek "ARE YOU THE FARMER?"

Bob; What a cool job! And good experience for the students. I haven't seen Killer Joe, sounds like it may be too violent for me.

Marcheline: too funny! Unfortunately, no one asked my father that, but I'm glad no one ever said about me: "He wants to go have sex with those cows"

HA! Well, being called "randy" isn't so bad... I have a tenant whose actual name is Randy and every time I see him it makes me laugh, thinking of that scene.

BTW - did you ever see the autobiographical movie "Wah-Wah" that Richard E. Grant wrote and directed? We just watched it last night. It was both better and more disturbing than I expected. Pleasant surprises included Julie Walters' performance (she played Molly Weasley in the Harry Potter movies)... doing a joyful, inebriated strip tease!

I definitely have a more tender spot in my heart for Richard E. Grant. What a childhood he had, and he came through!

I've never even heard of Wah-Wah...but Netflix has it so I'll see it soon. Thx Marcheline