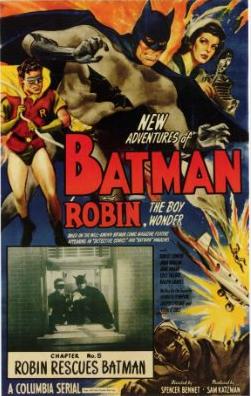 The first serial featuring the Caped Crusader, 1943’s Batman, was produced at the height of the frenzied zeitgeist of WWII, and featured an array of Japanese villains (white actors pretending to be Japanese, to be precise) and some appalling racially-charged dialogue. That serial is not suitable for children and is barely passable for adults, unless you like wall-to-wall epithets and ill-fitting costumes. 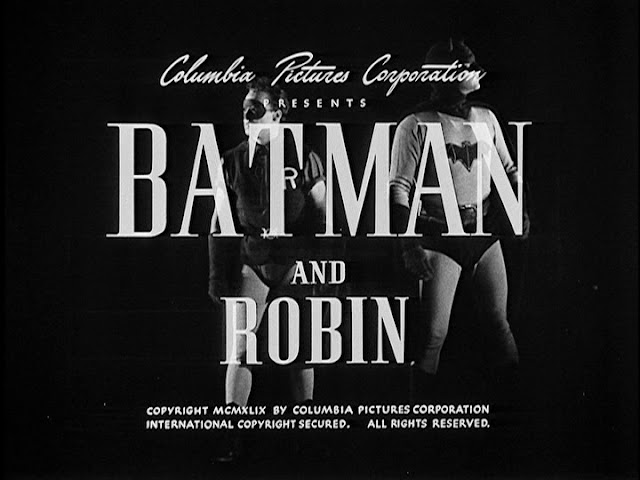 Batman and Robin from 1949 was the second cinematic incarnation, but the first in our Serial Saturday series to feature truly modern production quality and a decent print to boot. The shots are in focus and properly exposed (I know this doesn’t sound too exciting, but the older serials have some really crappy technicals) and the soundtrack is clear, strong and thankfully free of the scratchy noises and distortions that marred the Mascot productions of the 1930s. 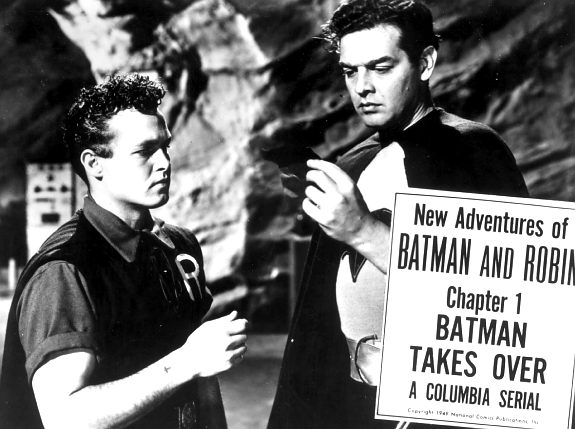 Batman is played by Robert Lowery, a 36 year old journeyman actor with an extensive record of film industry employment in westerns and crime dramas. Lowery’s good looks and smooth vocal delivery kept him busy as a supporting actor but the rank of elite leading man would elude him throughout his career. Lowery does a good job here of portraying alter-ego Bruce Wayne as a pampered waste of air, while imbuing the Dark Knight with an imposing toughness, despite his silly couture. 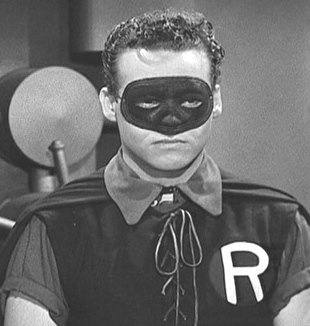 Taciturn John Duncan, as the Boy Wonder, is a welcome break from the cocky, self indulgent Robins of more recent vintage. Duncan’s still waters run very deep, and while his line readings don’t exactly sparkle, he exudes a steely focus on the task at hand. I’d much rather go into battle with this Dick Grayson than the brash, mouthy Robins of Burt Ward and Chris O’Donnell. 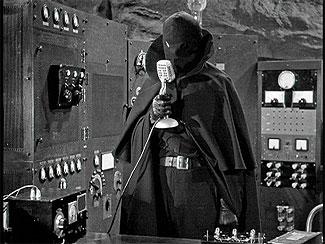 In this 4 ½ hour opus, Gotham City faces impending doom at the hands of a mysterious cloaked figure known as The Wizard. He and his band of sharp-dressed henchmen have stolen a top secret invention that’s essentially the world’s largest remote control. With it, the Wizard can commandeer any plane, train or automobile within a hundred miles, and use that vehicle to unleash wanton death and destruction. Well, he can ram a car into a tree anyway, which was about all the mayhem this low budget serial would allow. 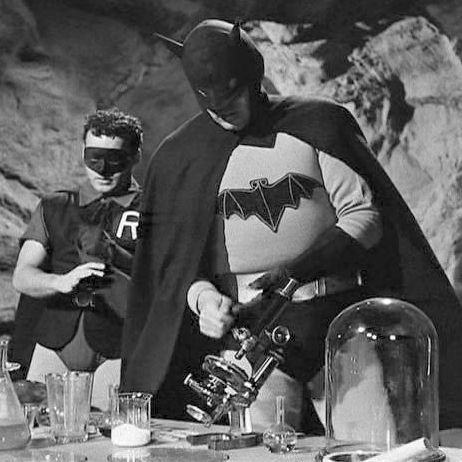 In Chapter One, our heroes leap to the Batmobile - actually in this production it’s a stock 1949 Mercury convertible – in hot pursuit of an armored car under the Wizard’s influence. While the Dynamic Duo is able to thwart the Wizard’s nefarious scheme on this occasion, it becomes clear that, as is often the case in serials, finally slapping the cuffs on this slippery perp will be a long, drawn-out affair. 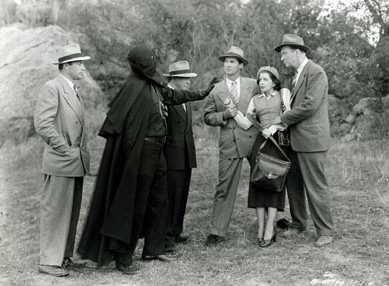 Just getting to the Wizard’s hideout is an exercise in patience. First, his henchmen have to go to an isolated location at the shore and find the exact right bush to move out the way, revealing a narrow tunnel that descends to a secret underground marina. From there, a submarine shuttles the men to an island where the Wizard scans them with a fancy version of x-ray goggles. If the visitors pass muster, the Wizard pushes a button and allows the men entry into his secret lair of buzzing contraptions and brightly flashing gizmos. 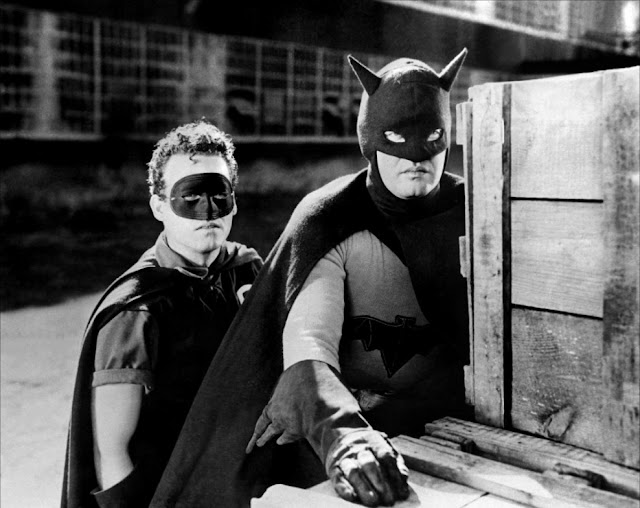 Visiting the Wizard requires a concerted effort. And after you do all that he doesn’t even offer you a cuppa. Hardly seems worth it. Anyway, this cumbersome ritual is repeated many times throughout the serial – I suppose it was one way to extend the episodes to proper length - and eventually the viewer wishes the Wizard would just move someplace closer to town; perhaps a nice condo, convenient to schools and shopping. 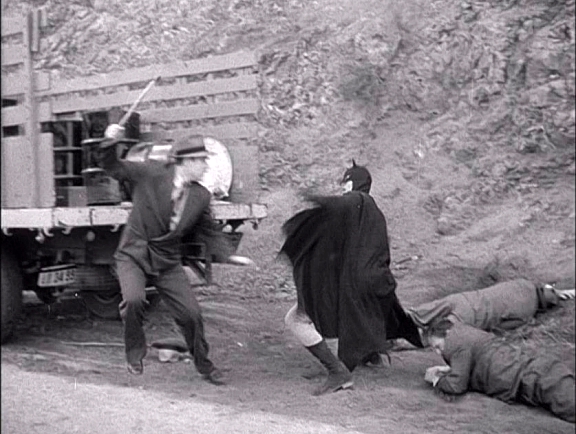 And speaking of town, the Gotham City depicted here is not the hotbed of foreboding art-deco skyscrapers as envisioned by Tim Burton and Chris Nolan, but rather a flat, sleepy burg - as exciting and energetic as Akron on a Sunday morning. Street scenes are filmed on back lots with absolutely no effort expended on atmospherics – no strolling extras, no passing cars – creating the sense that the city’s entire population suffers from pathological shyness. Car chases, and there are a lot of them, are filmed in rural areas on dirt roads. Unfortunately, the speeding vehicles create huge dust clouds that partially obscure our view of Gotham’s finest cabbage patches. 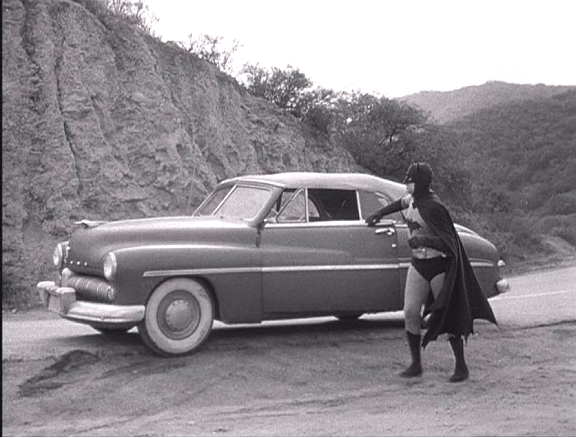 The cheapness extends to the Batmobile itself. In fact, there isn’t one. Here, Bruce Wayne’s personal vehicle must suffice as the Dark Knight’s ride. When the top is down, the Mercury conveys Bruce and Dick to their frivolous idle rich appointments. When the top is up, the Dynamic Duo is hot on the trail of the dastardly Wizard. This subtle subterfuge does not fool the very sharp and shapely Vicky Vale (Jane Adams), who finally asks the burning question “What are you doing with Bruce Wayne’s car, Batman?” This query stumped even the writers, as the Caped Crusader just kind of shrugs and laughs it off. 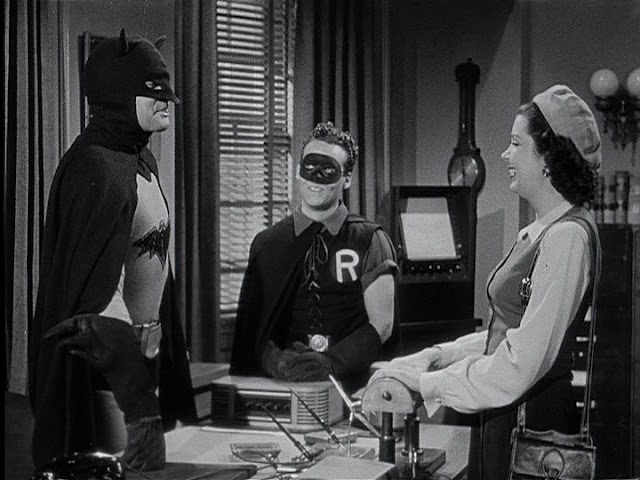 However, these same writers did create one clever deus ex machina; the Wizard’s terrifying device requires bearings made from very expensive diamonds to perform even the most rudimentary functions. So before he can destroy the world, his henchmen must knock off every Zale’s and Jared’s in Gotham, giving Batman and Robin an all-you-can-eat buffet of misdeeds to investigate and thwart. And that, my friends, is how you get a serial to last 263 minutes. 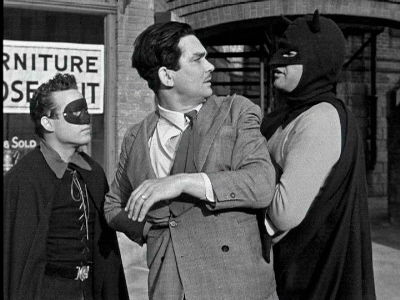 With the advent of the fourth hour, after the Caped Crusaders have survived raging infernos, falls from high rooftops, out of control airplanes and assorted other perils, the serial begins to chug toward conclusion. And by then most viewers, along with the Dynamic Duo, will have thoroughly had it with The Wizard and his shit. 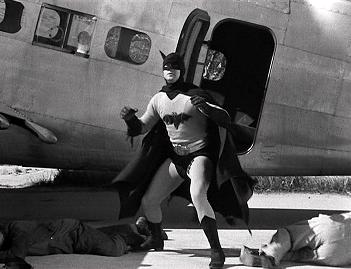 But there is one more revelation to be made - the discovery of the Wizard’s identity – and while it’s a complete surprise, it also is a bit of a letdown. But through this discovery, our heroes are able to finally to corner the devilish criminal. The actual apprehension is surprisingly laid-back and routine, kind of like the collaring of Al Capone for faulty IRS reporting. 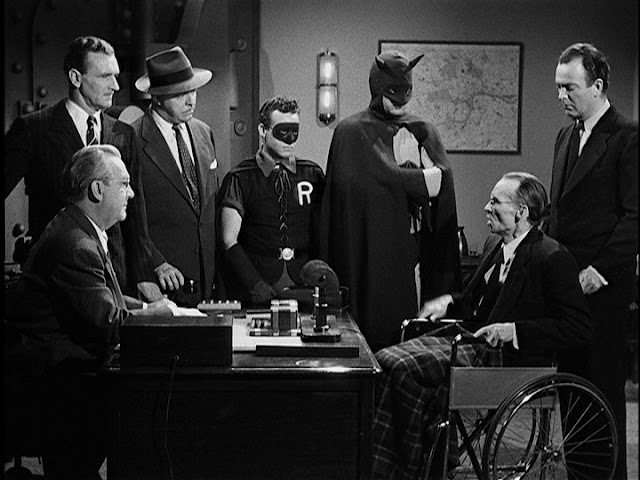 You’re probably thinking that after such a litany of complaints, your loyal but snotty reviewer hated Batman and Robin. Nothing could be further from the truth. In fact, I adored it. As a Batman completist, any manifestation of the character interests me, as long as it remains somewhat true to the legend. My least favorite Batman film, 2008’s The Dark Knight, took too many liberties for my taste, wasn’t much fun and was filmed in such inky darkness it was often incoherent. 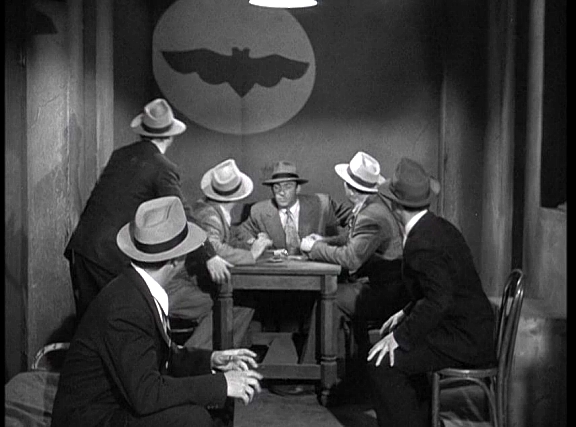 This serial succeeds due to the actors. Not necessarily the acting, which barely rises above serviceable, but the attitudes of the performers themselves. From Lowery’s Batman to the lowliest henchman day-player, the cast went about their roles with earnest, absolute conviction. 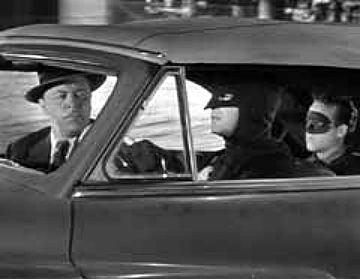 There’s no tongue-in-cheek smugness and no sense that the actors felt the script was beneath them. Instead, there’s an admirable resolution to interpret every character and each line of dialogue with an unshakable commitment to believability; the cheesy sets and hokey costumes be damned. Rarely is “work ethic” used as a reason to recommend a movie, but this lunch pail, blue collar version of Batman and Robin, devoid of irony and camp, is downright refreshing.

* I love the way the "bat signal" wings have been scalloped in the wrong direction - instead of looking like bat wings, they look like grandma's doily. HA!

* Old costumes were always so THICK, weren't they? Look at the felt bat stitched onto the front of Batman's hefty bat-o-tard. Hope it was chilly where they were filming!

* There's a dude driving around my town in a mint green car just like Bruce Wayne's. I keep trying to get up next to him at the red lights so I can chat with him, but so far no dice.

* This Robin has unfortunate hair.

* Look at the 8th image, where Batman and Robin are peering around a wooden crate. They have MATCHING CHINS!

* I love the way Batman's cave is strewn with items from a high-school chemistry class. Like he spends his free time cooking meth.

Thanks for this great review, and the fab pics!

LOL..I hadn't noticed the Bat Signal but you're right. Those tough gangsters were terrified by a projected doily. I suppose if Batman dressed as Grandma Moses they'd have surrendered immediately.

Yes, Robin had a bad hair serial...no wonder there are so many rumors about him being Esperanza Spalding's grandfather....

And be sure to get a pic if you see that '49 Mercury!
I've always wondered what the Batmobile looked like in color...

Will do! Still giggling about Grandma Moses...