Lee Falk’s The Phantom, created in 1936, was a precursor of the modern superhero concept. Essentially a hybrid of the Lone Ranger and Tarzan, The Phantom pioneered many pulp innovations, including the skin-tight union suits that have become the garment of choice for today’s battery of masked crime fighters. The Phantom’s jurisdiction, a mysterious African jungle rich in precious stones, valuable minerals and ravenous crocodiles, provides a groaning board of narrative possibilities. Over the years, The Purple Knight has battled pirates, poachers, headhunters, witch doctors and, most sinister of all, a number of multinational corporations.

This serial from Columbia Pictures was the first attempt to bring The Phantom to the screen and starred buff Tom Tyler as The Aubergine Avenger. Comprised of 15 chapters and clocking in at 5 hours, the production is a thorough immersion in all things related to The Ghost Who Walks and before it’s through you’ll be able to cite chapter and verse the complex history of the Legend in Lilac. 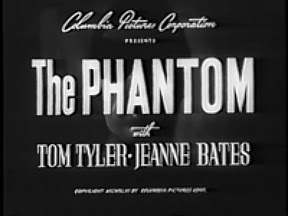 And you’ll need all 5 hours to figure out just what the heck is going on here, as the serial features not one, but two groups of villains, all competing for our hero’s time and attention. The Plum Protector (stop it! right now!) must also contend with renegade bushmen, surly jungle beasts, numerous pools of quicksand and a naïve band of explorers who always seem to get caught in the crossfire.

One group of baddies appear to be members of some sort of amateur mafia with designs on swiping priceless tribal artifacts. The other criminal enterprise is led by the evil Professor Bremmer (Kenneth MacDonald), who seeks to build a secret airstrip on land sacred to the natives. The exact purpose of this airstrip is not known, but it seems doubtful that tourists were clamoring to spend their precious vacations being eaten by tigers while drowning in quicksand. Tying this convoluted silliness together is some claptrap about an ancient treasure map scrawled on a shattered clay tablet. The majority of the map pieces have been recovered. But the really useful fragment, the one with “X” and all that, remains missing. 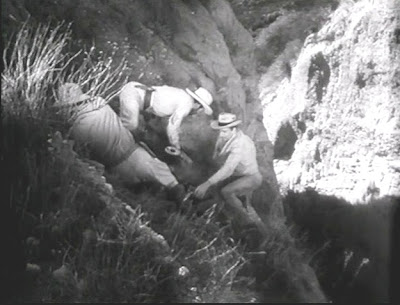 As a production company, Columbia was generally considered a cut above its main competitor, Republic Pictures, but neither outfit showered its respective serial divisions with lavish budgets. This production set in remote Africa would pose unique challenges and unintentionally create a bizarre and humorous geocultural mash-up.

Filmed at Beale’s Cut, a popular wilderness area near the confluence of Interstate 5 and Route 14 in Santa Clarita, Ca., the crew staged jungle scenes by augmenting the native vegetation with a few potted plants. The result is an arboreal aberration and the only spot on planet Earth where maple and palm freely intermingle.

Sets from old westerns were recycled as African villages and jungle settlements, making this corner of the Dark Continent look an awful lot like old-town Albuquerque. Even the characters’ names add to the confusion. The main local hustler is a bar proprietor named Singapore Smith which, last time I checked, was no where near Africa, but I concede does sound kind of exotic and cool.

The previously mentioned band of well-meaning scientists are guided by a group of sherpas who appear to be Mexican farmers pressed into service. Why gentlemen from Mexico would be leading an African expedition is anyone's guess, but it does account for the party's tendancy to get hopelessly lost in remote and perilous areas.

But most confusing of all are the tribesman, who look much more Samoan than African. Of course, this is usually the case when one takes overweight, white American actors and dresses them up in grass skirts and face paint, which is an accurate description of the wardrobe department’s efforts here. In fact, I can’t recall a single black actor being employed by this production. If I’m wrong I offer my abject apologies, but I really don’t have the energy to fast forward through the whole five hour shebang again and fact check my assertion. 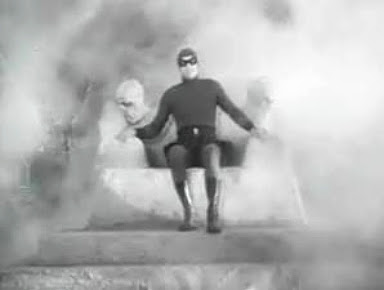 To evaluate what the serial DOES have, one must start with the performance of Tyler as the Mauve Marauder (I warned you!!), and while his athletic build cuts a fine figure in heroic long johns, his Phantom comes off as a bit smug and snooty - the kind of guy who'd go to an amateur musical in St. Louis and then complain that it was much better on Broadway. The script doesn’t help Tyler out very much, as he often utters the equivalent of “Nothing can go wrong now” in a self-satisfied delivery, just before everything goes horribly wrong.

Despite moments of prissiness and lousy prognostication, The Phantom is exceptionally skilled at fisticuffs, which is a good thing since in every episode some miscreant attempts to kick his amethyst ass. Our hero generally does well in the early going, scoring with vigorous body/head combinations. But the Violet Vigilante (please, please stop) has a bit of a glass jaw, and just one punch from his opponent will send him reeling backwards and crashing into a dining room set. The primitive African huts in this production are oddly replete with such furnishings, and it’s a good thing too, since Tyler destroys enough tables and chairs here to keep the assembly line at Broyhill humming for months. 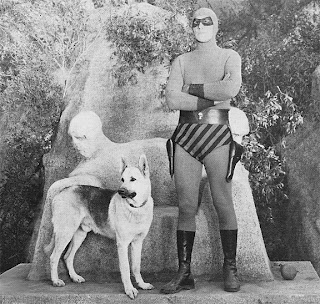 Accompanying The Phantom is his somewhat faithful dog Devil, a beast who seems bored with the entire endeavor. Devil doesn’t have much of an attention span, and often wanders off precisely when his owner needs him the most. Actually, Devil’s attitude is quite sensible if you think about it. Why should he rush in to fight a freaking tiger? The Phantom got himself into this mess…

Truth be told, I’ve never been a big fan of The Phantom. I always found his complex adventures difficult to follow in the comic strips. Probably had something to do with the fact that we only got the Sunday paper at our house, which meant I missed 6 out of every 7 installments. Still, I didn’t see anything here that caused me to reassess my opinion. After 5 hours with the Fuchia Firebrand I still found him odd, creepy and, in the realm of superheroes, squarely second-tier.

Join us next time when we discuss a leading light of the cape and tights crowd; a hero who is still packing movie theatres to this day. A crimefighter of such popularity that his street cred cannot be destroyed, no matter how lousy the serial….

Don't think I've ever seen or read The Phantom, though I have heard of him. Looks like I'll be safe to stay that way.

HA! "Mauve Marauder" brings back yet another line from Withnail... Uncle Monty saying "He's so mauve, we don't know what he's planning", trying to ostracize Marwood at the holiday cottage. When, in fact, Monty was the Mauve Marauder all the while! 8-)

LOL...Gosh Marcheline! You knoiw more Withnail quotes than I do!!
I bow to your presence....

Really enjoyed this write up. Yeah, these old serials can be a chore to sit through from beginning to end. When I watch them, I try to imagine what audiences thought of them back then. I wonder - If I was 12 years old in 1943, would The Phantom seem spectacular, or was it terrible back then, too?

Thanks Matthew, I have often wondered the same. I suspect they were greeted with awe and wonder, especially since in those days it was slowly doled out over a three month period. I don't think we'd have the attention span for that today.