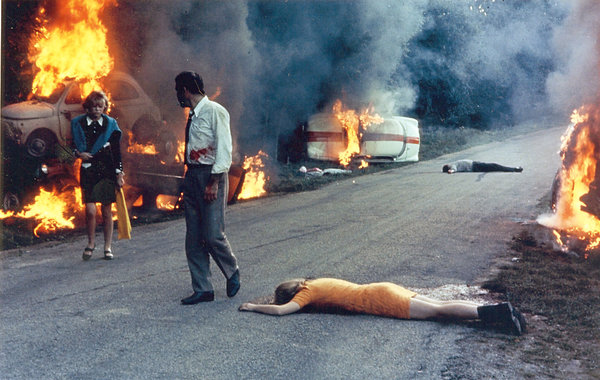 Weekend capped Jean-Luc Godard’s insanely productive year of 1967, and can rightly be considered the director’s Götterdämmerung. Both projects make their respective points with sledgehammer subtlety, and along with Godard’s previous features that year, 2 or 3 Things I Know About Her and La Chinoise, Weekend consummates an anti-consumerist thematic cycle.

As one of its frequent title cards proclaims, Godard approached Weekend as “a film found in a dump.” It is a Dadaist, no holds barred decimation of modern French society filled with shocking violence, Marxist theory and some really, really awful driving. Told through a series of set pieces –often with elaborate and impressive production techniques– Weekend leaves no aspect of class struggle unexplored or unscathed. As the world lurches by in fits and starts, Godard’s ever evolving absurdist tableau amuses, stuns and mystifies, casting a cinematic butterfly net over a society at war with itself.

The film’s narrative skeleton concerns the misadventures of Corinne and Roland Durand (Mireille Darc and Jean Yanne), a 30-ish bourgeois couple unhappily ensconced in a blandly generic Paris suburb. When not bickering, the couple spend their days engaged in adultery and devising far-fetched schemes to murder each other. When the couple pack up their tiny convertible and depart to the country for a family visit, things go off the rails quickly as a squabble over a minor fender bender ends in gunplay, and Corinne and Roland find themselves stuck in a traffic jam from the bowels of hell. This iconic sequence, which justifiably cemented Godard’s place in cinema history, really must be seen to believed. However, this masterwork of staging and coordination is only an amuse-bouche for the splendidly eccentric feast to come, as Weekend eventually morphs into a post-apocalyptic road movie, crazily traversing a landscape of self-inflicted destruction.

Often lost within its barrage of manifestos and mayhem is the fact that Weekend is at heart a comedy, with a decidedly dark tonality for sure, but a comedy nonetheless. And after the initial shock of the film’s rampant anarchy, its humorous edges become richer and more luminous. As Corinne and Roland stagger into a quaint village they nearly collide with a tractor driven by a farmer loudly singing the communist anthem L'Internationale. A few minutes later, we see the aftermath of yet another automobile accident, as the giant tractor has crashed into a shiny new sports car, leaving its young bourgeois driver in a pool of blood. The car’s other occupant, an enraged young woman dressed in the latest fashions, berates the farmer claiming her boyfriend had the right-of-way because he was “young, rich and handsome.” Rarely have the underpinnings of class struggle been presented in such starkly honest terms. Not only is its refreshing candor hilarious, the scene has a clarion ring of truth in this age of pampered billionaires.

Godard has always had a tendency to stay too long with scenes that don’t really go anywhere; sometimes for effect and sometimes out of what seems to be a kind of writerly stubbornness. While Weekend is not free of extended clunkers --the Lewis Carroll themed parody is too esoterically clever for its own good-- the director generally keeps to a proscribed momentum, and the film’s outlandish wriggles and twirls remain alluring. His diorama of flaming automobiles, violent hitchhikers and magically appearing historical figures form a visual wash that soothes the bitterness of Godard’s obscure literary allusions and political diatribes.

Just as Godard has taken the nation of France to the woodshed for its Gaullist follies, Corrine and Roland eventually arrive at a twisted version of the Garden of Eden for a scruffy date with destiny. As the Durand’s petty world of inheritance and Hermes is wiped out by a return to the basics of survival, Weekend completes its cycle of societal deconstruction. And this new world, like Corinne’s unusual lunch, will take some getting used to.