30 years ago, when “healthy” restaurants were a new and somewhat exciting concept, I frequented such an establishment in the funky neighborhood back east where I attended college. Over the course of a few semesters, I downed enough tabouleh and bean sprouts to keep a small Syrian farm happily humming. It all ended one cold, rainy afternoon when I sat down to yet another plate of falafel; its dense brown coarseness absorbing all light like a cosmic black hole.

I suddenly froze, my useless fingers unable to reach for my marginally clean fork. I just sat there, stricken by an unexplained paralysis, my body clearly staging a terrifying coup d’tat. My system simply wouldn’t tolerate another assault of mysterious, hinky foodstuffs from strange and forbidding lands. Healthiness be damned, what I needed was prime rib and creamy potatoes, white flour noodles dripping with cheese, crispy chicken coated in heavy breading and swimming in lard. And I needed these items in such endless bounty that after I’d had my fill, I would have to be wheeled from the groaning board in a hastily fashioned mechanical conveyance.

Upon that realization, I slowly regained the use of my limbs and used my new found strength to wave goodbye to the whole grain and macro-biotic. I promptly made my way to the nearest Steak & Ale, where I devoured a medium rare ribeye with such single mindedness of purpose never can it be said that cows die in vain. 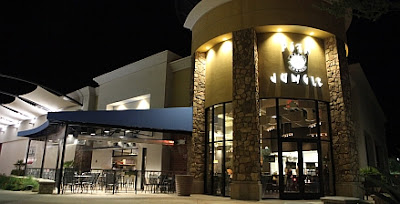 So my recent visit to Pita Jungle’s newest location in the upmarket Norterra shopping district was an intervention of sorts. While my disdain for aggressively healthy fare has hardened over the decades, unfortunately so have my arteries - or likely will soon - and a reappraisal of leafy organic eateries seemed to be in order. I’m happy to report that if the gleaming, modern Pita Jungle is any indication, all the changes have been for the better.

The dining room is an airy, spacious affair with attractive industrial loft design thematics; its stark walls featuring original paintings by local artists. Off to the left was a full service bar with stools for approximately 20 thirsty patrons - it’s nice to know the establishment’s health concept isn’t taken too far - and it looked like a marvelous place to while away an afternoon over a few dirty martinis. Not that I would ever do such a thing. 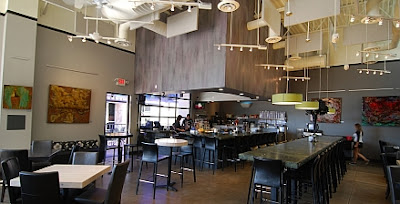 Our server was friendly and efficient, and happily brought my wife a gluten-free menu upon request. Being an adorer of glutens, I perused the regular menu contentedly and was delighted to find a few old favorites amid the shiny new offerings. Along with the expected salads and variants of tofu, were a couple of Greek favorites, Spanakopita and Dolmades, as well as an Indian inspired Chicken Tikki Masala that provoked a Pavlovian response. I may have soured on black bean burgers over the years, but my enthusiasm for ethnic exotica has only become fuller and more rounded, just like my waistline. I was also thrilled to discover that the menu contained absolutely no manifestation of chicken wings, making Pita Jungle the only restaurant in the greater Phoenix area to courageously buck this trite and annoying trend. With this crusty critic, the place was off to a flying start.

My wife ordered a glass of the house Argentinean Malbec ($5.95), which she declared excellent, while I - needing to keep my critical wits about me - settled for a tumbler of ice tea ($2.95) that was promptly refilled whenever needed. For entrees, my much better half asked for a cup of coconut curry soup ($4.95) with a side order of dolmades ($5.79), while I could not resist the allure of that Chicken Tikki Masala ($9.25). My full immersion in the splendors of arugula and mango would have to wait for another visit. 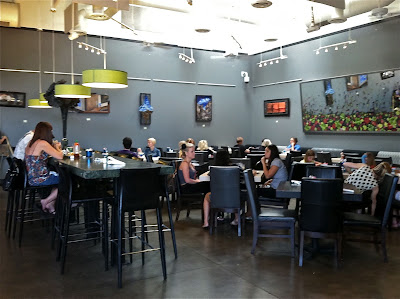 The place was about half full, a respectable showing for a Monday long past the peak lunch window. I noticed several diners availing themselves of Pita Jungle’s selection of sandwiches and wraps, all generously portioned and reasonably priced - the sandwiches, not the diners - at a range of 5 to 7 dollars. I made a mental note to try the massive gyro on a future visit, as an athletic young man at a nearby table appeared to be blissfully enjoying his. 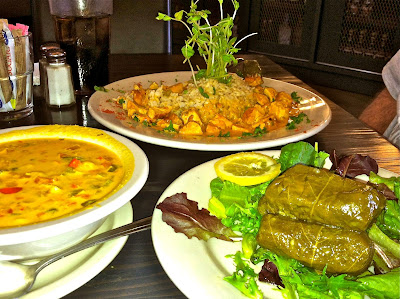 Our food arrived without undue delay and it was steaming hot and almost too pretty to eat. My masala was adorned with a bonnet of pea sprouts and resting on a comfy bed of brown rice. The curry soup was a resplendent mixture of yellow and red hues while the dolmades looked moist and fresh and not those dried up canned things some joints serve. And the food proved to taste as good as it looked. My masala was perfectly spiced, with subtle notes of ginger and cumin. The chicken breast chunks were butter tender without a trace of overdone toughness. The chopped cilantro garnish added flavorful earthy balance with the pea sprouts providing a fresh layer of delicate crunch. I sampled my wife’s soup and found it delicious if a trifle too spicy, but then I’m a wimp about such things. The real stars of the meal were the dolmades, and I managed to pinch a few off her plate during moments of distraction. Delicious little green bundles of joy they were, with just the right hint of vinegary bitterness. We later learned the dolmades were based on an old family recipe from the owner’s childhood in Lebanon. No wonder we could taste the love.

Our bill came to $31.25 with tax; a good value for what was, frankly, one of the best lunches I’d had in my 8 years in Arizona. While my re-embrace of healthy eating was far from complete, this first tenative step  exceeded expectations. But I suspect I’ll require several more delicious sessions at Pita Jungle to complete the cure. And I can’t wait.

You used too many unfamiliar words for me to fully understand what you are talking about here. I do know what cilantro is.

So are you changing the name of the blog? Or is this a one-off kind of thing?

Will: Thanks and Happy Jubilee!

RH: I'm thinking about a name and design change and probably adding some collaborators. I liked "Starland" but I found out that addy belongs to some woman who hasn't posted since 2004. Blogger really should have a statute of limitations or something

Lovin' the new food reviews David! It's a wonderful evolution of your online writings ~

Thanks Martine...and it's a great excuse to go out to eat :)