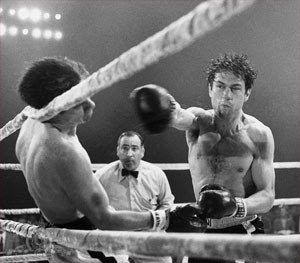 According to Indie Wire, the rumored sequel to Scorsese's 1980 classic is no joke. There will be a Raging Bull II.

While you contemplate this horrific news, here's a few of the other sequels in the pipeline...

Taxi Driver II: The patience of a withdrawn and alienated Atlanta cabbie (Tyler Perry) is severely tested when he volunteers to coach a little league baseball team.

Apocalypse Now II: A retired army captain (Martin Sheen) begins a new career as a stand up comedian in Las Vegas, where he falls in love with a former nuclear physicist (Emma Thompson) who now works as a cocktail waitress.

The Shawshank Redemption II: Tim Robbins and Morgan Freeman star as two aging beachcomers who fall in love with the same woman (Salma Hayek) while keeping one step ahead of a determined but sincere FBI agent (Ryan Gosling).

Of Gods and Men II: When their monastery faces financial problems, a group of monks enter a prestigious cheese-making competition with a $100,000 first prize. Ben Affleck and Keanu Reeves star.

The Shining II: Due to a scheduling mix-up, thousands of lingerie models descend on a remote Colorado ski resort for a convention, staffed only by a mentally unbalanced caretaker (Nicolas Cage).

If this is true, then Scorsese and DeNiro have turned from artists to whores. Of course some would say DeNiro already has.

Hehe... I don't know how much control Scorsese and Deniro have over this situation, but I agree with the theme of your comment