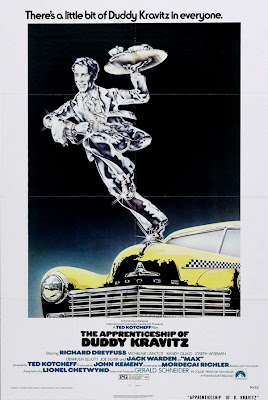 In between his star-making turns in American Graffiti and Jaws - the latter to be released on blu-ray this summer - Richard Dreyfuss appeared in this modest Canadian production. And while The Apprenticeship of Duddy Kravitz has not obtained the iconic stature of the other two pictures – to put it mildly – in its own way this portrait of a hustling dreamer is an equally rewarding cinematic experience. 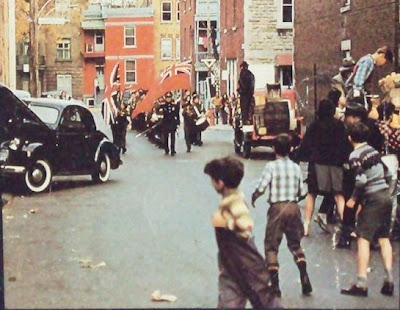 Based on a novel by Mordecai Richler, Canada’s answer to John Updike and chronicler of that perpetually confused between-the-wars generation, The Apprenticeship of Duddy Kravitz is an involving and entertaining look at Montreal’s Jewish community circa 1950, and the underlying fear, bitterness and guilt of its slightly traumatized residents. The film captures unique elements of self-loathing, here played mainly for laughs, as characters revel in traditional aspirations, yet occasionally chide each other for appearing “too Jewish”.
Dreyfuss plays the title character, a 20ish hustler determined to make it as an entrepreneur and earn the respect of his gruff father (Jack Warden), a widowed cab driver and part-time pimp. Duddy’s older brother Lenny (Alan Rosenthal) is studying to be a doctor, a pursuit that qualifies him as royalty in this cloistered neighborhood, and Duddy is eager to eclipse his sibling’s star in record time. The film follows the manipulative Duddy through a number of money making schemes, ranging from the visionary to the hare-brained, and creates an unlikely empathy for this borderline gonif. 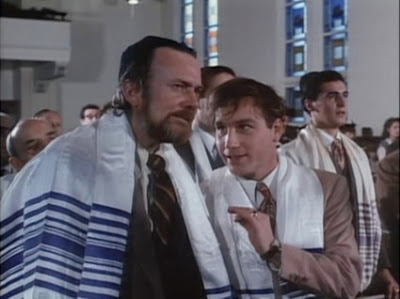 Along the way, Dreyfuss links up with a number of  lost souls and these supporting characters give the film comedic and emotional richness. Denholm Elliott is a scream as a booze-addled British film director – a sort of minor league Ken Russell – who goes into business with Duddy creating abstract, allegorical home movies of bar mitzvahs. Impossibly young and slender Randy Quaid delivers a heartbreaking performance as a naïve epileptic, providing a reminder of the enormous talent that made him a household name before his career descended to its current state of public untidiness. Veteran character actor Joe Silver lends his compelling baritone to the role of Duddy’s surrogate father while Micheline Lanctôt adds just the right flavors of experienced sexiness as Duddy’s French-Canadian shiksa goddess and moral compass. 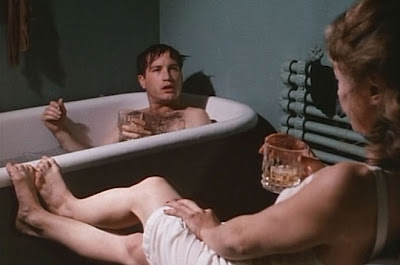 But The Apprenticeship of Duddy Kravitz is made manifest by Richard Dreyfuss, in a performance so thoroughly laced with tics and physical business his energy bursts from the screen. Under the watchful eye of underrated comedy director Ted Kotcheff – check out his ageless North Dallas Forty sometime for a poignant and hilarious skewering of the NFL – Dreyfuss doesn’t caress the camera, he collides with it; his tendency to scenery chew a perfect compliment to his character’s explosive persona. Kotcheff carefully builds the sleepy atmospherics of mid-century Montreal, then introduces the ticking time bomb embodied by Duddy. The pace of the film immediately quickens, yet close inspection reveals no change in its editorial rhythm; the film’s increased intensity attributable only to Dreyfuss. In scenes where supporting characters deliver impassioned speeches, Dreyfuss kicks at the ground like an impatient bull, calculating his next move. Duddy’s moral lapses are always attributable to some high and noble purpose; the end fully justifying the means, and the end is always Duddy. It’s a tribute to Dreyfuss’ transformative skills that he applied radically different techniques to Marine Biologist Matt Hooper the following year in Jaws, yet each character projected stark believability. 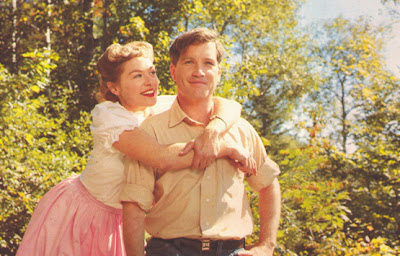 Like his costar Randy Quaid, Richard Dreyfuss has floundered in recent years, lost in an American film industry that has little use for his unique talents and, in truth, no longer deserves him. But in The Apprenticeship of Duddy Kravitz, Dreyfuss’ nervous nebbish ultimately gets exactly what he wants. Duddy also gets exactly what he deserves. And, tragically enough, the two things are identical.
at April 17, 2012

What a well written review. Not sure I'd ever heard of this movie.

My wife and I have been watching a lot of 70s and 80s TV shows (mostly drama) and have noticed how many old movie stars had second careers as guest stars. Some were in about every single TV show at least once it seems. Perhaps this would be a decent way for Dreyfuss and Quaid to get some work. And I don't think there's any shame in that.

Right, no shame at all. It appears Dreyfuss at least is listening to you. According to IMDB he's a got some TV stuff in the works

Great review of an interesting film. And Dreyfuss was so good at that time. He was great in Jaws and in Close Encounters of the Third Kind as well.