The Young Girls of Rochefort Turns 50

Jacques Demy’s The Young Girls of Rochefort offers a distinctly French take on the Great American Musical. The film has delighted and enthralled audiences for half a century, and after a recent re-watch, I can attest the film has lost none of its groovy luster. From its miniskirts and go-go boots, to its candy colored set design, to its breezy Jazz score by Michel Legrand, the film epitomizes the brash, carefree cool of the 1960s. It’s rumored that Damien Chazelle studied the film obsessively while prepping for La La Land, and the 2016 Oscar nominee is heavily steeped in homage to Demy’s bouncy epic. 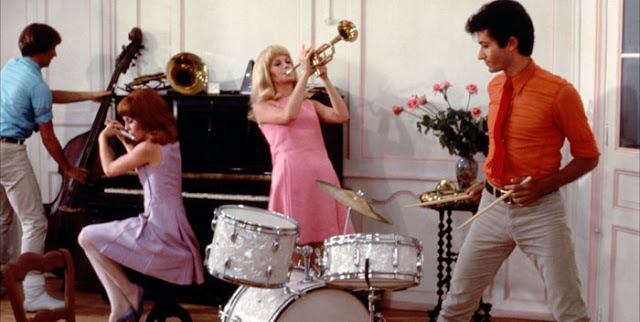 The film concerns a traveling musical show led by Etienne (George Chakiris) and Maxence (Jacques Perrin), who roll their convoy of equipment laden trucks into the town square for Rochefort’s annual Fete de la Mer. In between rehearsals, the guys roam Rochefort’s sleepy streets and get to know a few of the locals, including the mega-hottie Garnier twins (Catherine Deneuve and her real life sister Françoise Dorléac) who have a musical act and twinkly ambitions of their own. Along the way, there’s plenty of lively singing and dancing, with lavish production numbers and even a cameo from the great Gene Kelly as a visiting American songwriter.

After all these years, The Young Girls of Rochefort remains a feast for the senses, with colorful, eye popping spectacle and an assortment of catchy tunes choreographed to the nines. It also served as a launching pad for several long careers in the industry. Chakiris would relocate to Hollywood, where he would become a fixture of American television, appearing such shows as The Partridge Family and Dallas. Perrin would remain in Europe, but achieve international recognition for his pivotal role in the sentimental hit Cinema Paradisio (1988) and is still active today. Deneuve, of course, has gone on to iconic stature, even though she was more eye-candy than actress in those early days. Her sister was not so fortunate, however. A few months after shooting this film, Françoise Dorléac was killed in an auto accident on the beach road near Nice. Her tragic death stunned the French nation, but her spirit lives on in The Young Girls of Rochefort.