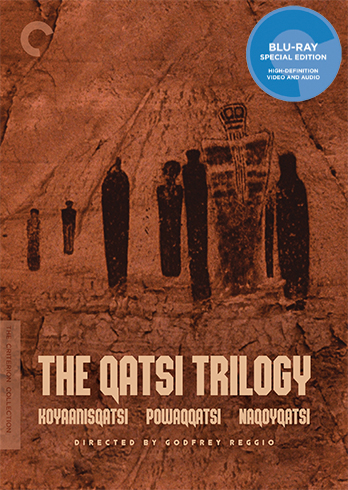 The Qatsi Trilogy is a collection of films made by Godfrey Reggio between 1983 and 2002. Each film offers an extraordinary and unforgettable cinematic experience, and their messages are, astonishingly, even more pertinent and vital today. The visual and aural wonders of The Qatsi Trilogy fall into no preset genre or easily explainable category of filmmaking. The simplest description would be a grafting of somber political treatise with IMAX style sensory joyride.

To fully understand these unique works, one must understand the filmmaker, and his singular background and sensibilities. Godfrey Reggio is not an assembly line graduate of the USC film school. In fact, he spent the 1960s as a social worker and political activist, founding several community programs for disadvantaged youth in New Mexico. He also spent 14 years in training for the priesthood, but abandoned that quest to pursue a deeper understanding of the philosophy and mysticism of the Hopi Indians. 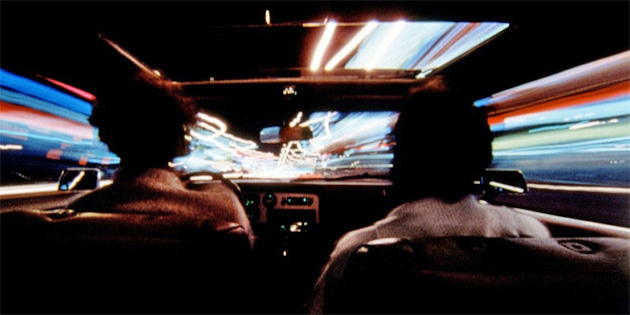 Reggio is, in short, a spiritual pilgrim with an Arriflex, and his films question the basic tenets of modern life, using the most basic components of cinema. Reggio’s wordless mediations consist exclusively of images and music, and through time-shifting scenes of the natural and manmade worlds, supported by Philip Glass’s expressive and omnipresent score, Reggio creates a beautiful sensory language that articulates his complex ideas directly to the human soul. 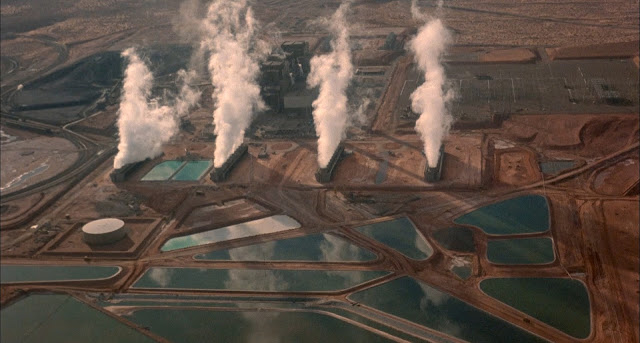 Koyaanisqatsi (1983) leads off the set, and viewers will find themselves mesmerized from the opening frames. The title is Hopi for “life out of balance,” and over the next 90 minutes, Reggio builds a compelling portrait of the insanity of modern life brick-by-brick. While Reggio’s films don’t follow a narrative per se, Koyaanisqatsi begins with a tone poem evoking Earth’s creation. Majestic vistas of pristine Monument Valley and Canyon de Chelly ultimately give way to aerial shots of the various grids imposed on Earth by man, and the dusty havoc wrought on the planet by his extractive industries.

Reggio’s camera eventually makes its way to the steel canyons of Manhattan. What follows is a time lapse montage that stuns and stupefies. Human beings are reduced to mere machine cogs, as long lens shots of crowded midtown streets and undercranked scenes of Grand Central Station at rush hour combine with Glass’ frenetic score to issue a blistering condemnation of technological society. Koyaanisqatsi is a luscious tableau that raises the cinematic experience to the level of the carnal, and seduces and horrifies in equal measure. 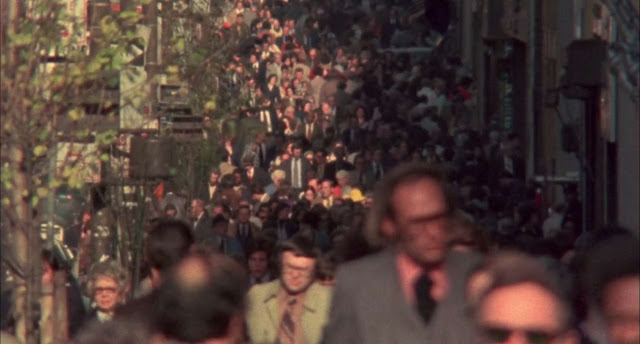 The title of Powaqqatsi (1988) translates as “Parasite” and here Reggio shifts his attention to the trauma inflicted on the Third World by industrialization. As workers covered in mud scurry into a mine in Pakistan and Bedouins drag heavy loads through a desert sandstorm, a chorus of children’s voices echo the ghostly chants of a lost culture. An Indian commuter train, bulging with riders, slowly makes its way through an impoverished city choked with thick smog, while Sikh and Buddhist holy men pray for divine providence. 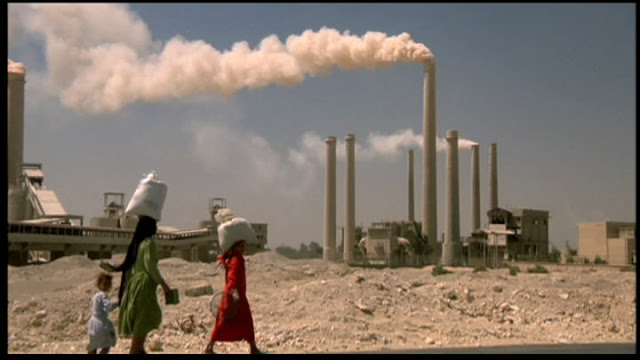 The scope of Glass’ chart widens here as well, incorporating percussive and indigenous instruments. While not as visually bombastic as its predecessor, Powaqqatsi has its share of money shots. Scenes of village life rendered in rippling waters give the proceedings an arresting impressionistic quality, and a slow motion shot of a young Latin American girl in a frilly dress walking past a bullet riddled wall with “Long Live Guerrilla War” scribbled in graffiti will leave viewers haunted and breathless. On its initial release, Powaqqatsi did not receive the universal acclaim of Koyannisqatsi, but viewed with today’s eyes it is a work of mystical prescience. In the 25 years hence, its fevered denunciation of the global economy rings with a despairing truth. 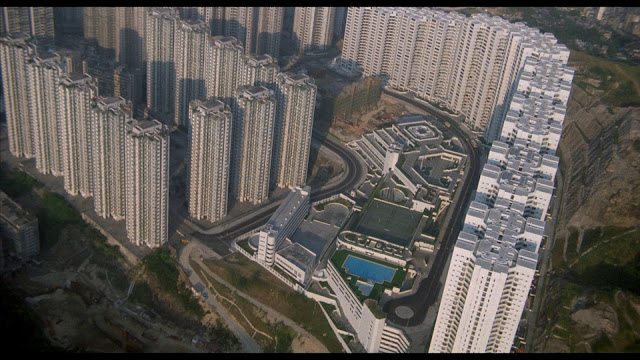 Naqoyqatsi (2002), in essence “War as a Way of Life”, rounds out the trilogy and serves as a powerful and disturbing coda. Working mainly with stock footage and computer manipulated imagery, Reggio casts daggers into the heart of the digital age and its rampant depersonalization. Virtually no ill of the new century is left unscathed, as Reggio cleverly tackles the medical industry, athletes on steroids, relentless advertising and the venal alliances of our politicians, to name a few. In his most potent metaphor, Reggio uses old footage of crash test dummies to draw a staggering equation to victims of terror, leaving a nightmarish aftertaste. In support is Glass’ lushly orchestrated score, featuring cello lines from Yo-Yo Ma that seem dispatched from another world. 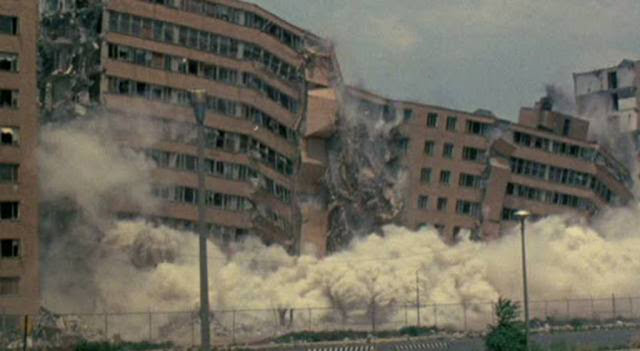 Constructed in three acts, Naqoyqatsi’s final stanza draws Reggio’s two decades of observations to their logical, and devastating, conclusion. As the dogs of war unleash weapons of ever greater destruction, history’s great works of art liquify and literally melt into each other, as a culture races unabated to its self-inflicted annihilation. As skydivers flirt with death in a search for cheap thrills, the universe reclaims its besotted and ruined celestial offspring, leaving only a field of star dust where a great society once stood. And we are back to where Koyannisqatsi began, with weathered petroglyphs as mute witness to man’s perfidious folly. 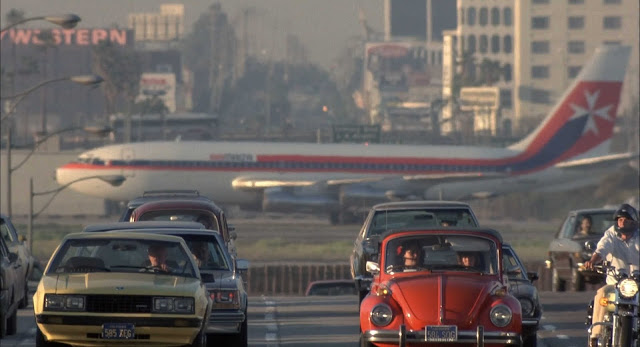 This reviewer first encountered Koyannisqatsi in the mid-1980s. when a local art house ran it as a double feature with Liquid Sky, Slava Tsukerman’s funky, punky, sci-fi exercise in bad taste from 1982. It didn’t seem an odd pairing at the time as each film dealt with worlds facing self-destruction due to uncontrollable appetites. Truth be told, I loved both films, but while history has relegated Tsukerman’s movie to cultish obscurity, Reggio’s existential epics remain relevant and influential, both aesthetically and politically. As Criterion’s release of The Qatsi Trilogy makes clear, Godfrey Reggio is a visionary who sought to use the unique strengths of cinema to present his powerful prophecy of a dire and dissolute future; an objective usually reserved for political broadsides and think tank white papers. Not only was he artistically successful, unfortunately it appears he was right.

Thanks Paul! Good to be back. Trying to get back in the swing of things