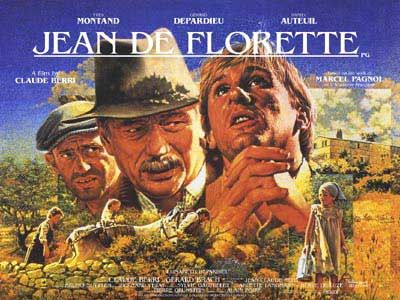 Claude Berri’s Jean de Florette is part one of a sprawling Shakespearean-style tragedy; a multi-generational tale of parched, flinty soils and equally barren human souls. Set in the blinding sunlight of Provence circa 1920, it’s the story of the last surviving members of the Sobeyran family (Yves Montand, Daniel Auteuil), a once flourishing clan laid low by decades of petty squabbles and shady dealings. To rescue the Soybeyran name from its death rattles, Montand and Auteuil devise a scheme to virtually steal a neighboring farm rumored to have a hidden spring, thus providing an endless supply of water for their lucrative cut flower enterprise. 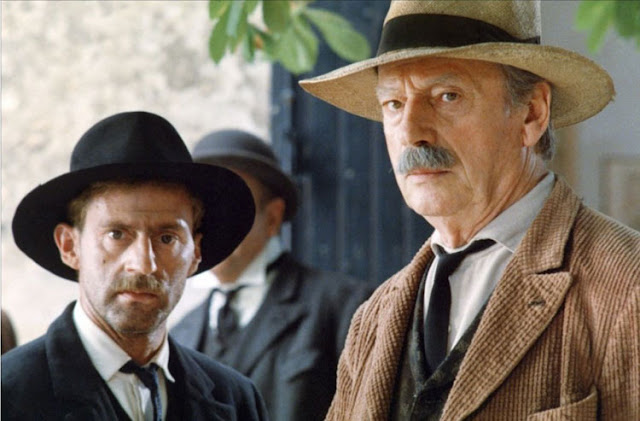 A wrench is thrown in their plan when the land is inherited by a hunchbacked Parisian accountant (Gerard Depardieu) with designs on building a life there with his family. Their foul machinations threatened, Montand and Auteuil resort to vandalism and sabotage to ensure the naive Depardieu’s failure. But in pursuing their cruel strategy, the smirking Soybeyrans unwittingly seal their own disastrous fate, opening a Pandora’s Box that will eventually unleash upon them a ruthless justice of recrimination, regret and abject misery.

The film works both as an engrossing rural melodrama, and as a tactile evocation of time and place. Cameraman Bruno Nuytten’s glowing frames are filled with the rocky cliffs, dusty trails and azure skies of the Vaucluse district. It’s a landscape as beautiful as it is unforgiving, and those who attempt to scratch out a living from its hardscrabble wastes must fight and conquer the hostilities of nature. But equally harsh is the bedrock of arrogance and narcissism that lies just below the surface of the Soybeyrans. Berri cleverly makes the family’s odious history visually manifest in Auteuil’s gap-toothed, squinty-eyed portrayal of the appropriately named Ugolin. Looking like a French peasant version of Alfred E. Newman, this role made Auteuil an international star; his embodiment so convincing audiences were shocked to later learn that off screen he was actually a handsome fellow.

But this is truly Gerard Depardieu’s movie. His energetic capture of the urban innocent with dreams of a simple life in the country still rings true today. His attempt to learn farming from musty textbooks is a classic miscalculation that initially amuses, then turns dangerous and deadly as his fruitless toil damages his body and psyche. Depardieu dominates his scenes, emitting a foolhardy passion that seems to jump from the screen. And as we will learn in the sequel Manon of the Spring (1986), underneath Depardieu’s infantile enthusiasm lies an arrogant streak of his own, and he comes by it honestly.
at August 27, 2016