All the President's Men Turns 40 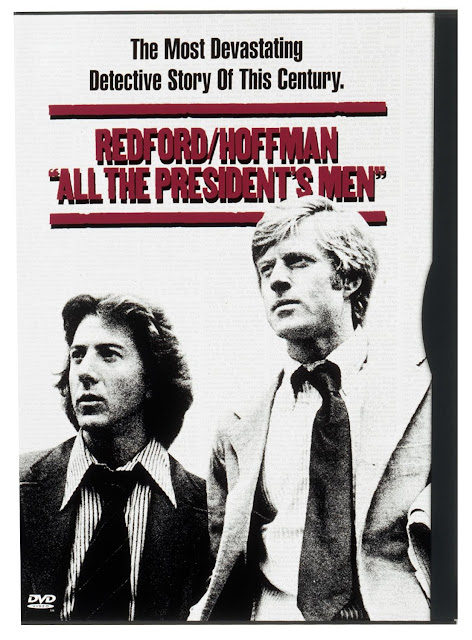 On the afternoon of June 17, 1972, my father and I were watching a baseball game between his beloved Baltimore Orioles and the Minnesota Twins. Between innings a newsflash came on the television announcing that a group of burglars had been arrested at Democratic National Headquarters in Washington DC. My father didn't have much of a reaction to the news - he was much more worried about Boog Powell's inability to hit Bert Blyleven's curveball - but I remember thinking at the time: “I bet that bastard Nixon is behind it.” I was a mere teenager but I had already developed a healthy disdain for President Richard M. Nixon. His constant lying about a “secret plan” to end the Vietnam war - a plan which apparently involved shooting student protestors - had earned him a special place in hell as far as I was concerned. But I couldn’t have imagined the political shitstorm that was about to erupt, and how it would dominate the media and the American consciousness for the next two years. 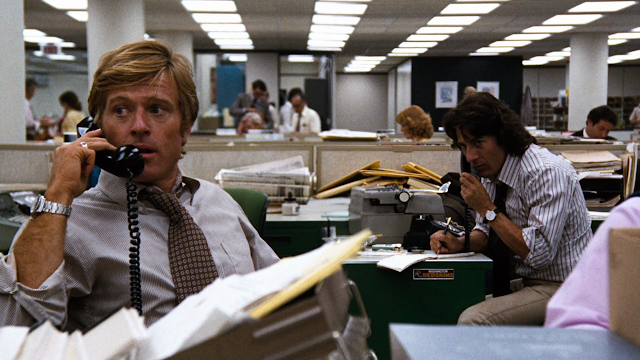 Alan J. Pakula’s All the President’s Men (1976) chronicles the early formation of those storm clouds, as two low level reporters for The Washington Post, Bob Woodward and Carl Bernstein (Robert Redford and Dustin Hoffman respectively), amassed countless hours of legwork getting to the bottom of what the Nixon administration derisively dismissed as a “third-rate burglary,” From a White House staffer’s little white lie about library books, viewers see the case against the Executive Branch slowly built brick-by-brick, with plenty of blind alleys and wild goose chases along the way. Whenever the trail goes cold, the intrepid reporters get a helpful nudge from an anonymous source codenamed Deep Throat (Hal Holbrook, portraying a character revealed decades later as disgruntled FBI agent Mark Felt). 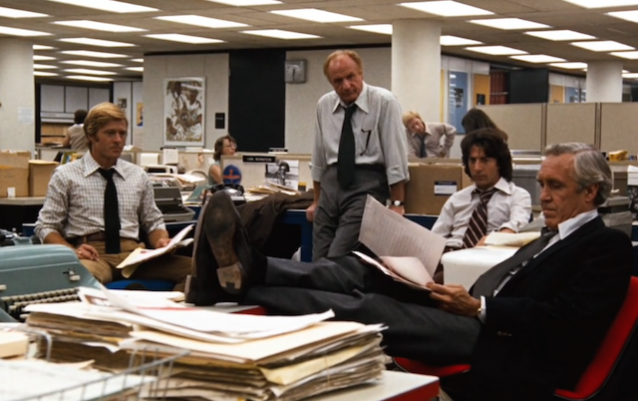 All the President’s Men would be a fascinating watch simply for its depiction of a crucial episode in American history, but as a happy bonus it’s also a terrific piece of filmmaking. In addition to his superstar leading men, Pakula stacked the deck with some of the most gifted character actors of a generation. Jack Warden, Martin Balsam, Jane Alexander and Ned Beatty lend vital support, along with Jason Robards, who won an Oscar for his portrayal of steely-eyed publisher Ben Bradley. The film features a number of superb examples of “telephone acting,” as Redford’s dogged determination on the phone leads his nervous respondents into revealing more information than they’d planned. The simple, natural lighting schemes of cinematographer Gordon Willis represent a significant break with Hollywood’s glamorous traditions, and gives the film a documentary look without the grunge. But the highest accolades must go to Oscar winning screenwriter William Goldman, who took a story of mind-boggling complexity and distilled it to basic elements, giving viewers a crystal clear timeline of the arrogance and corruption of the loathsome Nixon cohort. 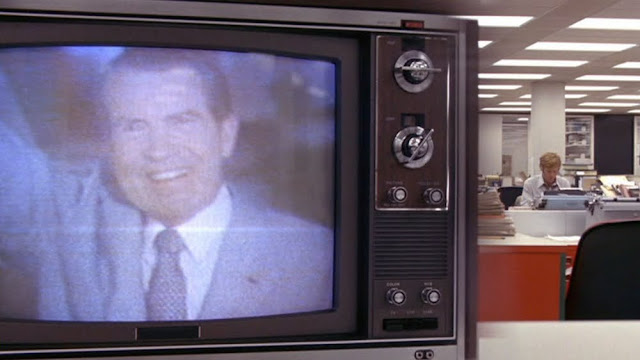 Nixon was certainly not the last corrupt politician - indeed there seems to be an endless supply - and All the President’s Men will make viewers long for the days of the great investigative journalists. Today’s reporters are very busy applying hair gel and tooth whitener, leaving little time to roam the dark alleys of Foggy Bottom sniffing out threats to democracy. Even the heroic young scribes depicted here have grown fat, sassy and fully embraced by the DC establishment. Especially Woodward, who every few years churns out a ream of political puffery that becomes an instant best seller. But for a brief, shining moment in the early 1970s, the antagonistic relationship between the press and the power worked exactly as the founding fathers envisioned, with heinous practices revealed and ruthless scumbags held to account. It’s almost enough to give you hope for the American Experiment.
at April 05, 2016