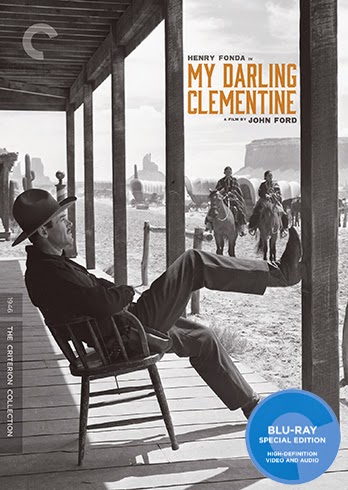 John Ford’s My Darling Clementine is a prime example of the Great American Western, embodying all that is good and right and just about this once dominant cinematic genre. Now available in a beautiful new hi-def burn by Criterion, this 70 year old horse opera gleams with new life and luster, preserving in minute detail the sweep and grandeur of Ford’s bedrock moralist visions. My Darling Clementine stands as a testament to Ford’s unique ability to balance the mundane with the monumental in perfectly proportioned tension; his laconic cowpokes equally imperiled by a parched, unforgiving wilderness and the dark designs of its human intruders.

While most scripts strive for reduction, My Darling Clementine is a case study in art of narrative inflation. The film takes a relatively minor incident in American history – a violent misunderstanding between two shady factions popularly known as The Shoot Out at OK Corral – and imbues it with a roiling backstory worthy of a Verdi libretto. Its perfect opening scene; a pristine panorama of Monument Valley sullied by the sudden arrival of hundreds of cattle as they climb over a ridge, simultaneously evokes man’s ejection from paradise and his foolish attempts to master the natural world. With undeniable logic My Darling Clementine, like Kubrick’s 2001 or Malick’s The Tree of Life, begins at the Beginning; the only rational place for a story driven by man’s primordial instincts.

Saw this western for the first time at this year's Cinema Ritrovato in Bologna. Very nicely paced and beautifully photographed western. I like the scene in which Henry Fonda takes Clementine to the dance. Such a tender and happy little scene.