Philippe Le Guay’s film is a feel-good romantic comedy that should tick all the boxes of those looking for well-done escapism. Set in 1962, Fabrice Luchini stars as a meek stock broker and family man living in a sprawling Paris townhouse that has been in his family for generations. When his wife (Sandrine Kiberlain) hires a vivacious Spanish maid named Maria (Natalia Verbeke), Luchini’s passions are slowly stirred in new and unexpected ways. He eventually befriends Maria and in the process discovers a community of Spanish domestics with impressive work ethics and tender dreams of a better life. Luchini’s admiration of these hard working ladies causes him to become their advocate, leading to surprising role reversals that are both amusing and exhilarating. Excellent work here from Luchini, Argentinean actress Verbeke and Almodovar veteran Carmen Maura. The Women on the 6th Floor is an entertaining diversion that’s not the least bit challenging, yet it manages to restore a little bit of your faith in humanity. 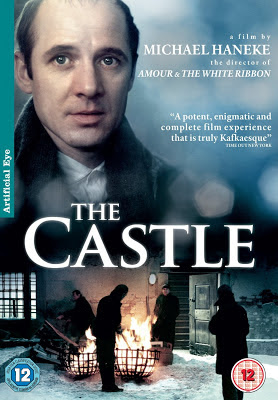 The Castle is a 1997 made for TV version of Franz Kafka’s last novel. Directed by Michael Haneke - then relatively unknown - the film is carefully faithful to its source, and features snippets from the text delivered in voice over. Ulrich Mühe - the sensitive Stasi officer from The Lives of Others - stars as a land surveyor who’s been dispatched to a backwater village in Austria. There, he is met with a cold and mysterious hostility by the locals. They resent his intrusion on their dingy, crumbling burg, which the villagers seem to regard as some sort of secret paradise. While the film has few of the visual flourishes that distinguish Haneke’s recent work, he does manage to create a nightmarish world of xenophobic, small minded rubes and stubborn bureaucrats in keeping with Kafka’s themes. If you’ve ever fought city hall or had a dispute with a large corporation, you’ll identify with Mühe’s attempts to jump through the endless hoops local officials put in his way. The film also has moments of comic relief, thanks mainly to Mühe’s bumbling assistants and an amusingly slutty barmaid (Susanne Lothar). Kafka died before finishing the novel and, for better or worse, the film remains true to the book’s abrupt ending. Kafka and Haneke are often referred to as artistic soulmates, and this densely surreal allegory brings out the best in each of them. 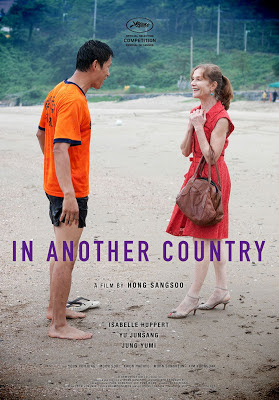 In Another Country is an earnest little narrative experiment about comings and goings at a weekly rental beach house one quiet summer. Isabelle Huppert plays three different French tourists seeking a little fun in the South Korean sun. Not a lot happens and it’s not the type of film that stirs strong emotions, but Huppert fans will find it worthwhile. I’m going to seek out more films by director Sang-soo Hong. He’s definitely onto something but I’m not sure what.
at June 01, 2013