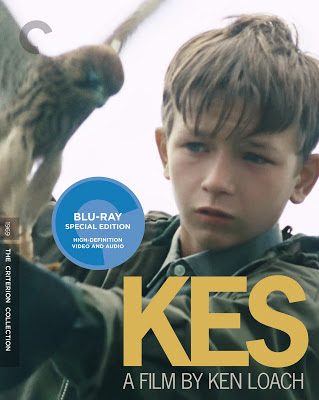 Kes is short for kestrel, a type of falcon common in the UK, and out of the blighted potty-mouth of young Billy Casper (David Bradley), it’s a term of endearment in this story of an unlikely friendship between a bird of prey and a victim of industrial society. 15 year-old Casper leads a hardscrabble life amid the lush green dales and stone cottages of Yorkshire, scurrying every morning to complete his paper route in time for school, then handing his meager earnings to his struggling, hapless mum (Lynne Perrie). Billy’s father abandoned the lot years ago, leaving the family with nothing but bitter memories and soiled reputations as they scramble to survive. 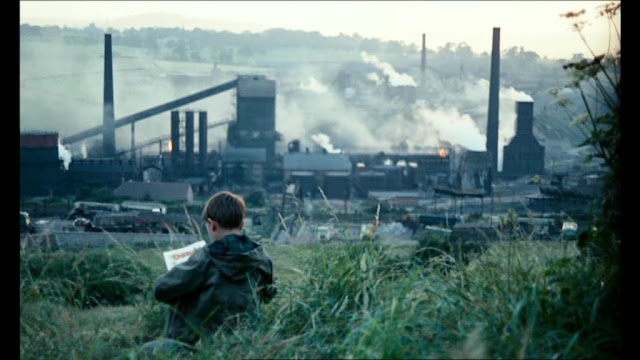 Named one of the 10 Best British Films of the 20th Century by The British Film Institute, Kes has no shortage of enthusiastic supporters. To UK Boomers, this BAFTA winner is often citied as a generation-defining work, with an impact similar to Easy Rider or The Breakfast Club on North American youth. Prior to Kes, few British films had ever attempted to deal realistically with the rigid and stifling class struggle that dominates every aspect of English society. The British film industry was adroit at glamorous spy thrillers and heroic historical epics. But when it came to examining the crushing social ills within the shining borders of Albion, not so much.
The unvarnished presentation that so eluded Pinewood was delivered here in spades by director Ken Loach, producer Tony Garnett and cameraman Chris Menges. Simply stated, Kes is a film of astonishing realism, despite the fact that the filmmaking is almost completely devoid of realist technique. It’s really baffling and quite remarkable. Kes features all the conventions of fictional narrative, yet manages to overcome them in the creation of a film that, in terms of immediacy, seems hard-wired to the soul. 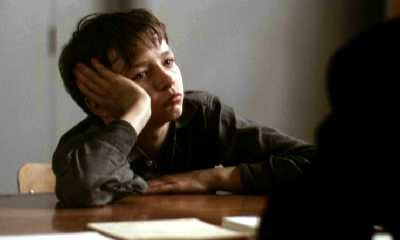 There’s no bouncing, hand held cameras, no loudly mixed background noise, none of the Hanekesque minimal flourishes that we so admire for their clarion ring of truth. As a film, Kes has often been described as documentary-style. Not only is that inaccurate, it demeans Loach’s achievement; as if he somehow fooled us into believing this waif-and-bird story simply through stylistics. There isn’t the slightest aspect of cinema verite anywhere within Kes’s angst stricken blue-green layers. The shots that at first blush seem so spontaneous and fluid are revealed, upon closer inspection, to be the result of precise and painstaking blocking. The conceit of available light is demolished as further analysis shows Menges’ subjects constantly bathed in flattering, and carefully placed, illumination. Billy’s frequent idylls in the countryside are accompanied by a mellow jazz flute - think Pan meets John Coltrane – and while this romantic artifice should, at least in theory, be a barrier to intellectual immersion, its very preposterousness echoes the absurd notions that have taken root in Billy’s psyche. 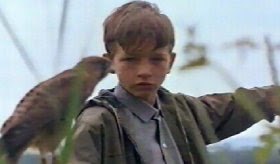 Billy feels an odd spiritual kinship with kestrels, the smallest and least regal members of the falcon genus, and he spends his late afternoons traipsing through neighboring farmlands observing their graceful flights against the amber rays of sunset. His discovery of a nest prompts a dangerous climb up an ancient, crumbling stone wall, where Billy pockets a chirping fledgling with designs on training the bird and molding it into a loyal companion. A pilfered book on Falconry teaches Billy the basics, and soon he is spending every spare moment with the creature in an intense effort that brings not only a feeling of accomplishment, but a much needed escape from the mind numbing conformity of the British school system. 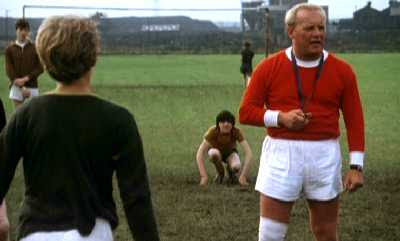 It is in these scenes of scholastic life that Loach’s unique realist visions propel the film from merely interesting to outright extraordinary. Billy’s schools days are presented as a collection of set pieces; each exploring a critical moment through revealing, and at times harrowing, details. Despite the film’s location in the north of England, Loach strikes head-shaking tones of universality that will resonate with viewers from Nebraska to Novosibirsk. There’s the archetypal sadistic gym teacher (Brian Glover, in a glorious performance) whose cruelty is matched only by his deep insecurities. True to form, Glover cravenly fawns over the athletic boys, while viciously ostracizing the weak and the uncoordinated. Loach works all manner of magic with this vignette, and as Billy stubbornly refuses to yield his spirit in the face of Glover’s incessant bullying, we gain a deeper admiration for the boy’s indomitable will. 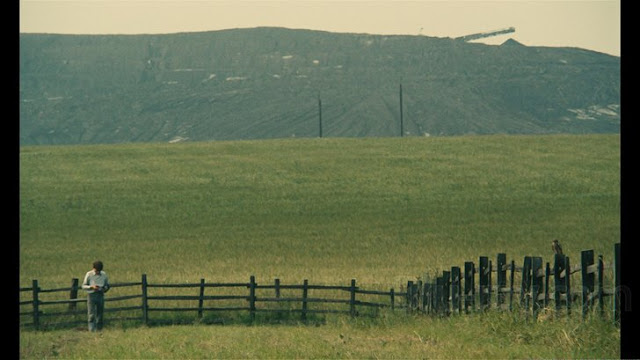 But Glover is small potatoes, for waiting at home is Billy’s half brother, the atrocious Jud (Freddie Fletcher), a mean spirited, selfish lout several years Billy’s senior who daily descends into a coal mine as dark and hostile as his very soul. Despite his noxious bluster (and incredibly irritating voice), Jud is made of much weaker stuff than the diminutive Billy, for he has been subjugated by an educational system that seeks to predetermine one’s lot in life. The elect – those who have scored well on specialized tests and hail from stable backgrounds – are given the best teachers and training. Those not as fortunate, like Billy and Jud, are put on tracks designed to lead only to menial vocations and factory work. 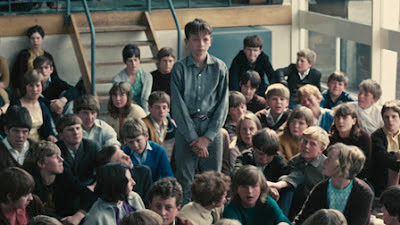 Pressed by a well meaning English teacher, Billy eventually spills the beans about his kestrel training activities, leading to a breathtaking scene that uncovers all of David Bradley’s unfiltered vulnerabilities. Untrained as an actor, Bradley relies on instinct rather than technique, which takes the scene farther into the realm of truth telling than audiences are likely accustomed. The effect is not awkwardness, but rather a transfixing revelation of the deep running of still waters, as Billy’s highly detailed description evokes an intensity of purpose far beyond his years. However, Billy’s bearing of his soul shines a bright light on the weak spots in his armor, and reveals the secret of his undoing to those consumed with petty jealousy.

Presented in 1.66:1, the European standard of the time, Kes has been laboriously restored by combining the original camera negative and printing CRI with state of the art digital processing. Supervised by Loach and Menges, the transfer is remarkably sharp and rich, especially considering the inherent snappiness of the color negative stock in use in 1969. While some of the original elements were badly degraded and scratched, Criterion has remastered the film with such attention to detail Kes looks like it was filmed a month ago.

I’m happy to report the urge to create an ersatz 5.1 mix was thankfully resisted, thus the audio exists only in crisp, clean mono. The viewer has the choice of two versions: the original production dialogue or a tweaked incarnation that accompanied the film’s North American theatrical run. The latter features periodic dubbing, as some of the Yorkshire slang is replaced by more conventional idioms. But unless you grew up in Northern England, subtitles are mandatory regardless of the version chosen, and Criterion has thoughtfully provided them as an option.

This 45 minute documentary, produced specially for this release, re-assembles the principals for a thorough account of the many challenges, and outright miracles, experienced in bringing Kes to the screen. Director Loach describes in detail his techniques to create heightened realism and credits Czech New Wave directors Milos Forman and Jiri Menzel for providing his personal inspiration. Producer Garnett tells us just how close Kes came to being scrapped for financial reasons, and only a last second heroic phone call from Tony Richardson to United Artists in Hollywood allowed the production to continue. Most amazing of all, the film was made almost entirely with non-professional actors culled from open casting sessions held at Yorkshire area schools. Proving their performances in Kes were no fluke, many of these “unknowns” went on to long careers in film and television.

An episode of this long running BBC arts program honoring the career of Ken Loach is included. Presenter Melvyn Bragg examines the Loach filmography with an emphasis on the director’s social consciousness. In addition to Loach, the program features interviews with Stephan Frears and Alan Parker, who declares that Loach’s work “reminds me of why I became a filmmaker.”

This early work by Loach and Garnett, produced in 1966 for the BBC series Wednesday Play, is a thematically and stylistically absorbing drama worthy of a stand alone release.

The story concerns the whirlwind romance of a young hitchhiker (Carole White) and a free spirited lorry driver (Ray Brooks), set amid Britain’s severe affordable housing shortage of the 1960s. The film is an emotionally charged, no-holds-barred look at the plight of those caught in the slipstream of greedy developers and uncaring bureaucracy.

Watch for the great Geoffrey Palmer in one of his first roles, as a snooty estate agent you just want to throttle. Cathy Come Home is a moving, heartbreaking film that clearly shows the perils of a middle class pushed to the limit. Writer Graham Fuller provides a thoughtful post-film analysis of the political issues raised in Cathy Come Home, plus historical perspective on the social significance of Wednesday Play as a television series.
22 Page Booklet

Those wishing to delve deeper into Graham Fuller’s encyclopedic knowledge of all things Ken Loach will enjoy his well written essay featured here. The booklet also includes a selection of stills from Kes, along with in-depth notes on the extensive restoration efforts undertaken to make this blu-ray edition a reality. Beautifully designed and printed on quality stock, the booklet makes a fine, and informative, keepsake.

Kes’ original British trailer is included, and it too has been restored to pristine glory. The trailer is noteworthy for presenting the film as a fairly conventional rural melodrama; brimming with fistfights and sentimentality. It managed to omit just about everything that made Kes unique and fresh, but I suppose such was the state of movie marketing in 1969. 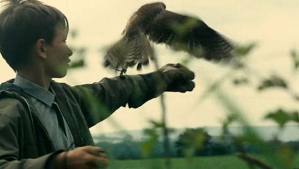 Kes can rightfully be called a marvel, without the slightest hedge or qualification. Ken Loach and his team have created a slice-of-life for the ages, with a truer sense of the vagaries of society than any time capsule could ever hope to convey. The film overpowers all resistance and transports the viewer to rolling green hills, damp asphalt playgrounds, oppressive classrooms and dingy coal mines deep in the bowels of Earth. Not by magic, but by Loach’s stubborn insistence on absolute authenticity. Billy Casper’s attempt to train a wild bird is not so much an effort to master nature, but to unify with it, as nature offers his only visible means of escape from the unfair and peculiar strictures of the British social order. Though steeped in the distinct traditions and impenetrable accents of Yorkshire, Kes is a film that achieves a universal resonance through settings and performances that astonish with their unshakable, rough-hewn conviction.
at March 12, 2013

I'd forgotten about Kes. I heard about it a while back and meant to put it in my queue.

I wrote this awhile back, but never posted the full review until now. I really need to see it again to make sure I didn't oversell it.

Nice how you can write what you see.

Every time I come here, there's one more damn movie I gotta see. . Onto the list it goes.