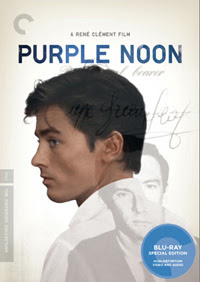 Remade forty years later as The Talented Mr. Ripley, René Clément’s Purple Noon from 1960 was the first attempt to bring amorphic rogue Tom Ripley, the subject of a series of popular crime novels by Patricia Highsmith, to the screen. Ripley was a precursor of today’s identity thieves, but instead of huddled in front of lonely computer, Ripley went to popular jet set locales and hobnobbed with the idle rich, getting to know every detail about the lives of his potential victims. Once Ripley had assumed their identities, no measure was too extreme to protect his secret or prevent his unmasking.

Now available in a spectacular Criterion blu-ray, Purple Noon features the then relatively unknown but equally spectacular Alain Delon as the crafty con artist. The film is set largely on the Italian coast, but frankly, the sensual, deep azure of the Mediterranean Sea has a hard time competing with Delon’s beauty. Ripley has been sent to this sun drenched paradise in search of a pampered playboy named Philippe (Maurice Ronet), whose profligacy his wealthy father is weary of bankrolling and wants back home in San Francisco. However, Ripley and Philippe become friends, in a frat boy, hail fellow well met sort of way, and along with Philippe’s long suffering girlfriend Marge (Marie Laforêt), the trio spend their days in leisure aboard a sailboat amid vistas of scenic splendor.

As Purple Noon is a highly structured, plot driven thriller, little more can be offered in the way of plot synopsis, but suffice to say that narrative twists and turns eventually place Ripley at the epicenter of a complex web of fraud, and much worse. However, Purple Noon’s true significance lies in the artistry and aesthetics of its execution. Clément tells the story with the elegant competence of a true veteran, managing Highsmith’s knotty mosaic with clarity and conviction, often in circumstances less than ideal. If one has ever tried to stage and film coherent action sequences from the narrow, slippery deck of a fast moving sailboat, the full measure of Clément’s skill becomes apparent.
Read More
at December 17, 2012

I really like Alain Delon in Le Samouraï, and I'm sure I've seen him in anther movie recently, but can't think of it.

Interesting stuff about the cinematographer and American over-lighting.