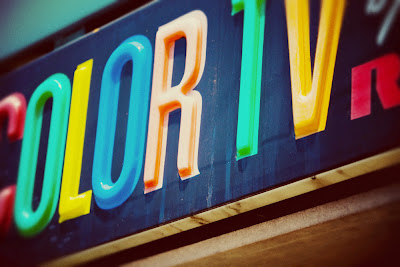 Contrary to my appearance, I’m not old enough to remember a time when there was no television. I can, however, clearly recall the days before color TV, when as a kid I huddled in front of our tiny black & white display to watch a variety of monochrome entertainment. In football I saw the Cleveland Grays grapple with the Washington Silverskins, admired that platinum bombshell Ellie Mae Clampett, and guffawed at the antics of that great comedian Slate Skelton. Fifty shades of gray had a radically different meaning in those days, and generally summed up the state of the art in broadcast technology.

In the 1960s, many programs began to be produced in color, as the television networks and electronics manufacturers colluded to build demand for the spanking new chroma sets that were popping up in department stores. These early color TVs were tremendously expensive, costing as much as twelve hundred dollars. And that’s in 1960s currency, mind you. Adjusted for inflation, that figure today would be, well, a ton. 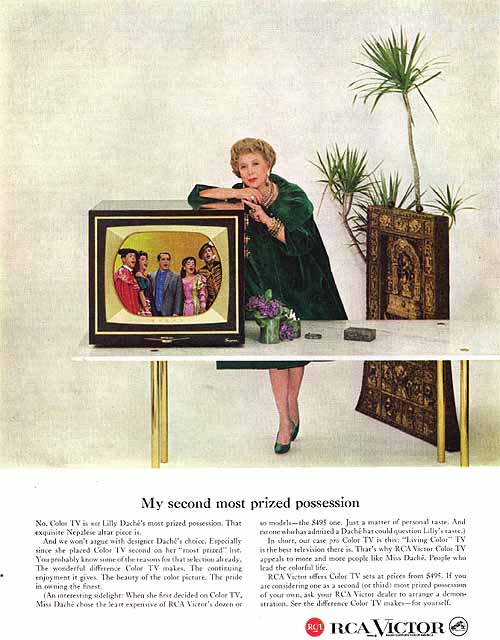 It took awhile for this new technology to be embraced by the market. Not only was it costly, there was public suspicion that color TV might be just another passing fad; a ruinously expensive hula-hoop. And television in general was receiving significant backlash, with everyone from preachers to psychologists warning that TV viewing would ultimately render the nation’s populace lazy and stupid. A warning that, of course, has proven correct. But eventually these fears were overcome by the one thing America has always done best: relentless advertising. A fierce demand for color TV was constructed brick by brick, and soon consumers were overcome by lust for a product that, just a few months ago, they didn’t even want. The folks in my hometown were some of the last holdouts, stubbornly clinging to their B&W sets while the world around us reveled in full spectrum video.

The wait was difficult for me and my friends. My classmate Sid became so frustrated that he ordered a gadget from a comic book called “The Colorizer.” This gizmo promised to convert any B&W TV to color for a mere twenty-five cents, shipping included. A few weeks later, Sid received in the mail a cardboard tube with a transparent plastic sheet rolled up inside. The sheet was imprinted with three colored bands that ran horizontally: green on the bottom, a sort of yellowy pink in the middle and blue on top. The enclosed instructions were simple and explicit: “Hang the sheet with masking tape in front of your TV screen. Turn on your TV and enjoy.”

What the Colorizer created was not exactly color TV, but a simulation with varying degrees of effectiveness. It sort of worked on wide, panoramic shots of natural vistas -- ok for “Wild Kingdom” for instance-- but, since TV scenes were mostly close-ups, the illusion required significant suspension of disbelief. Captain Kangaroo didn’t fare well at all, and the normally robust Bob Keeshan appeared to be suffering from liver failure and blue hair. Sid’s dad tolerated the Colorizer for a few days until one night, while watching a baseball game his beloved Orioles were losing, he ripped the plastic sheet from its masking tape moorings and proceeded to slice it to shreds with his pocket knife, claiming the damn thing was giving him headaches.

My next encounter with Color TV, the real thing this time, occurred a few months later when my mother and I accompanied my father to Roanoke for a statewide meeting of the Farm Bureau Cooperative. We stayed at the Ambassador Motor Inn, a motel so low rent and ticky-tack that in the 1980s it was demolished and replaced with a public landfill, and most locals considered it an improvement. But the decrepit Ambassador did have one, rather incongruous, saving grace: a brand new color TV console adorned its threadbare lobby. One evening, while my father attended a presentation breathlessly entitled “Cucumbers: Worth the Risk?,” my mother and I hunkered down to watch an episode of the wildly popular Batman TV show in living color. While I certainly enjoyed the program’s vibrant, swirling hues, I also experienced a vague sense of disappointment. The Caped Crusader’s mysterious and brooding midnight blue costume from the comics had been replaced by an eggplant and lilac scheme that was decidedly non-butch. As for Robin, suffice to say he was a sartorial disaster regardless of medium; his weird Christmas elf attire appearing equally hinky in print or video. Adding to my disappointment was frequent distraction due to the nearby traipsing of various drug addicts, prostitutes and inbred rednecks who called the Ambassador home. 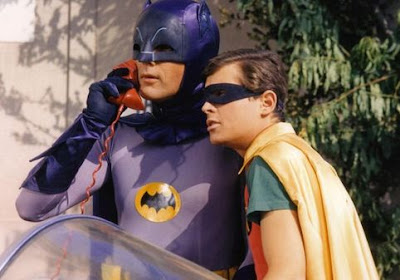 The first person I knew to take the plunge and actually buy a color TV was my Uncle Duke. A few years earlier, he had quit farming and taken a position with the Sheriff’s office. Despite having four kids, one of whom attended private and expensive Lynchburg College, Uncle Duke and Aunt Elizabeth always seemed to have extra cash to blow on luxuries. She had the first washer/dryer of anyone in our family while Duke regularly indulged his passion for new Chevrolets. Duke’s largess was a bit puzzling, considering sheriff’s deputies, especially newly minted ones, weren’t paid very much. Despite rumors of corruption in local law enforcement, no one ever questioned Duke about his finances, And once Duke started inviting folks over to watch Bonanza on Sunday nights, no one really cared. 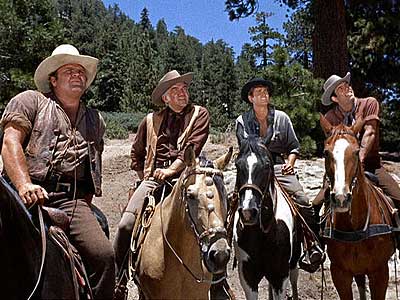 One of the first shows to be broadcast in color, the weekly adventures of the Cartwright clan had a spellbinding effect on audiences in the 1960s. Bonanza’s bittersweet scripts struck a near perfect balance of two fisted masculinity and sentimental bleeding heart liberalism, and the show made viewers feel like better people simply for watching it. In fact, to better appreciate show’s moral virtues was often used as a rationale for purchasing a color TV. At first, Duke invited just a few close friends and relatives over to behold Bonanza’s splendors. But as word got out, people began dropping over during the week --often with freshly baked pies-- angling for an invitation. Sometimes the new invitees brought friends and relatives of their own, swelling the attendance. Sunday visitation at Duke’s house began to get out of hand, prompting him to move the TV onto the front porch on nice evenings to accommodate the growing crowd. Duke, who was quite gregarious, loved mingling with his new found friends and looked forward to Sunday evenings with great anticipation. Aunt Elizabeth, on the other hand, was less sanguine and began to refer to the new TV as “devil-spawn.”

Things reached critical mass one chilly October Sunday when another standing-room-only crowd began to assemble. A battered pick up truck, desperately searching for a parking space, accidentally backed up and over the prized boxwoods Aunt Elizabeth had been trying for years to coax into a hedge.

The driver, realizing his error, immediately got out of the truck and offered his sincere apologies. Aunt Elizabeth did not recognize the man, which only added to her rage, and she quickly summoned her husband over to join the conversation. Beaming, Uncle Duke shook hands with the man and told him not to worry about the boxwoods, everybody makes mistakes.

As the man turned away to repark his vehicle, the fuming Aunt Elizabeth asked her husband, “And who, pray tell, is that?”

“Oh uh. Roger something. I stopped him last week for a busted taillight. Seems like a really nice guy.”

Aunt Elizabeth had heard enough. “Now you’re inviting criminals you find on side the road???”

“He’s not a criminal. Just a busted taillight. He promised to get it fixed”

With that, something inside Aunt Elizabeth snapped. She pushed her way through the milling crowd and bounded the front porch steps in one leap, planting herself in front of the TV screen just as Bonanza’s opening credits began to roll.

“Now listen to me. All showings of Bonanza, present and future, have been cancelled. Y’all need to go home...now! Buy your own TVs and leave us alone! If my husband invites you here, ignore him, I repeat, ignore him. He is hereby unauthorized!”

After a few moments of embarrassed silence, the crowd began to gather their lawn chairs and chicken bones and file out of Duke’s front yard. He remained behind, wishing the attendees well and apologizing for his wife’s outburst, explaining that she hadn’t been feeling well lately. My father took Uncle Duke’s arm and whispered, “Does this mean the World Series is off for tomorrow?”

Uncle Duke winked at his younger brother and said, “I’ll talk to her....”

Oh, Michael Landon... egads, was there ever a more handsome man?

My house was always the last one to get any new technology. We still had an 8-track tape machine in our den when other kids were playing records, and we thought we'd died and gone to heaven when Dad bought an ancient PONG game for our TV! Jeez, we were geeky.