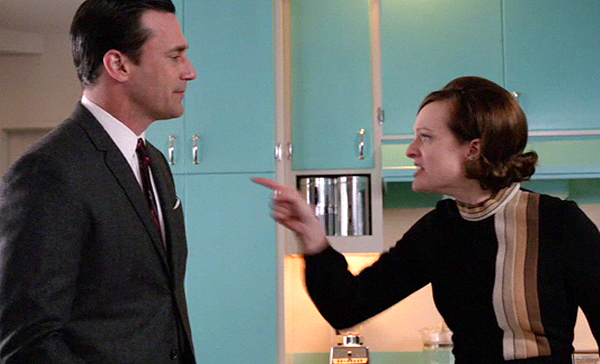 Season 5’s pace began to quicken in its final 4 episodes. It seemed even Matthew Weiner realized the show had been dogging it dramatically and it was time to get on the stick. Changes and revelations came fast and furious, while some foreshadowed story elements never came to fruition. Peggy (Elizabeth Moss), now firmly established as Don’s top lieutenant, appeared settled into the routine of a confident professional. But her tussles with the unimaginative Heinz advertising managers began to wear away her dispassionate veneer. However it was clear she had taken another important evolutionary step toward her goal of becoming a full fledged creative: she’d developed a disdain for her bosses and her clients. 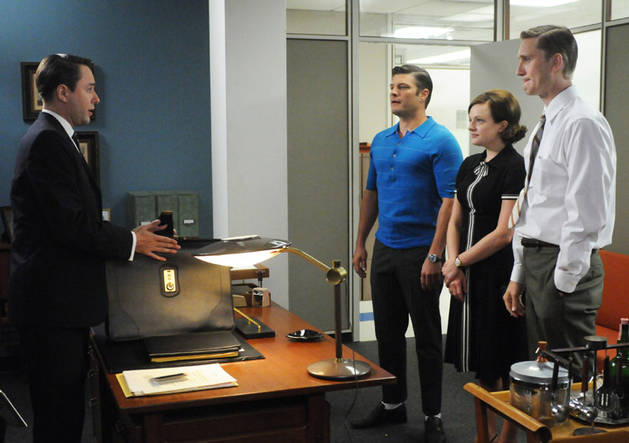 In another sign of her maturation, when the talented Ginsburg became the new hot flavor of the month, Peggy put aside her professional jealousy - or at least appeared to - in favor of a team first attitude. But her notions of equality within the walls of SCDP were made delusional when the agency was awarded the Jaguar account. The Jaguar pitch - and all its associated manipulations - was the perfect manifestation of how little had changed in the sphere of sexual politics. Jaguar was won by a sexist ad campaign, created and presented entirely by men, for an old world sexist clientele. Even the car itself resounded with the faults and fallacies of male domination. Beautiful to behold but finicky and unreliable in performance, the vehicle embodied all the rationales men have used to degrade women for centuries. The smug, cocky expressions of the presentation team when they returned to the office was a priceless Mad Men moment. Without a word of dialogue, Don, Roger, Pete and company announced to the agency it was time to stop the warm and fuzzy stuff and get to work. And bring me some ice. 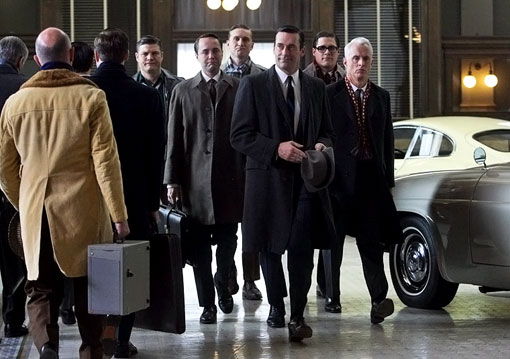 All this was a bridge too far for Peggy, who’d been banned from working on Jaguar because “she wouldn’t understand”. After she blew up at Don during a meeting at a test kitchen the die was cast, and Don’s tossing of money in her face a week later sealed the deal. Peggy began to consider her options, leading her to the doorstep of Ted Chaough (Kevin Rahm), Don’s sleazy, untalented doppleganger. Her goodbye to Don was a moment steeped in poignancy, yet it served as a classic distillation of their difficult, and quite confused relationship. But the show was not done with Peggy yet, as she and Don accidentally reunited at an art house cinema in a scene reminiscent of Yoda and Luke Skywalker from Return of the Jedi; the cautious respect of sudden equals, with years of shared experience adding a conspiratorial layer. 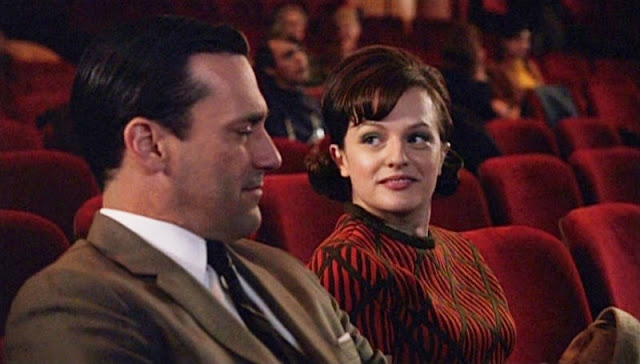 Joan (Christina Hendricks), in many ways Peggy’s opposite, appropriately moved in the opposite direction, becoming permanently entrenched in SCDP as a voting partner. Her path to partnership was controversial, shocking actually, but served to shine a bright light on sexism’s Achille’s Heel. Joan became the symbol of the agency’s Faustian bargain with Jaguar, and this bit of original sin could be “the gift that keeps on giving” to the show’s writers in future seasons. It seems unlikely that the sexual appetite of the Jaguar folks will stop with buxom Joan, and one wonders which of the Mad Women will be next, and how the affected Mad Men will react. One thing's for sure, who ever it is Bert Cooper (Robert Morse) will be all for it. While he had little screen time this season, Cooper proved himself throughout the Jaguar affair to be a heartless, soulless scumbag. Underneath his kindly professorial facade lurks the true Randian spirit. When it comes to evil, he makes Pete look like a rank amateur. 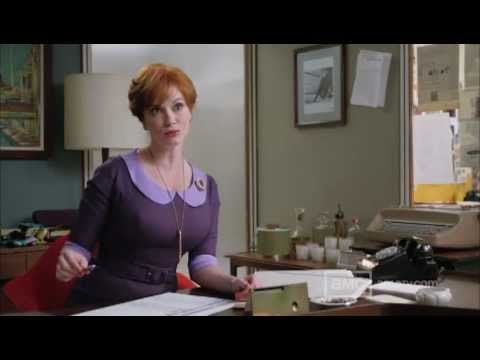 But Joan was not just a sacrificial lamb with a big pay day. Her character proved this year to be a survivor, and pity anyone in her way. When her husband Greg (Sam Page) returns on furlough from Vietnam, she is not truthful about the origins of their new baby. While the deception is counterbalanced by Greg’s history of domestic violence - violence he occasionally got the worst of - it still seemed out of character for Joan to so thoroughly mislead. Her acquiescence to Jaguar was disturbing as well, but a realistic appraisal reveals her options basket quite empty. Just as there’s a demand for Peggy’s talent there’s one for Joan’s. And this was the cleanest, quickest and most lucrative market for her wares. 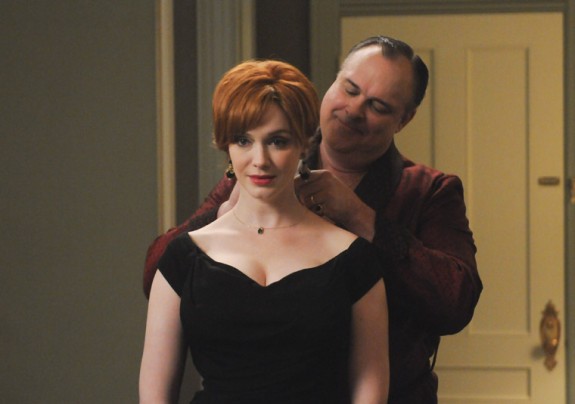 Jon Hamm was credited as a producer this season, but the added responsibility didn’t distract from his performances one bit. Season 5 displayed many sides of Don Draper, and Hamm was never less than riveting in all manifestations. There was the happy-go-lucky, madly in love Don from the early going, the prickly and out of touch Don from midseason and the concerned, gallant Don from year’s end. The season began with Don’s fortieth birthday, and subsequent episodes made good use of the assets and liabilities of this milestone to maturity. For the first time, Don was not the office’s hippest maven of popular culture and was often victimized by the shock of the new. In a hilarious scene backstage at a Rolling Stones concert, Don looks as out of place amid the pimply, rebellious youth as Bob Hope. After a contentious debate among his young staffers over which rock n roll song to use in a commercial, a clueless Don throws up his hands and asks, “When did music become important?” 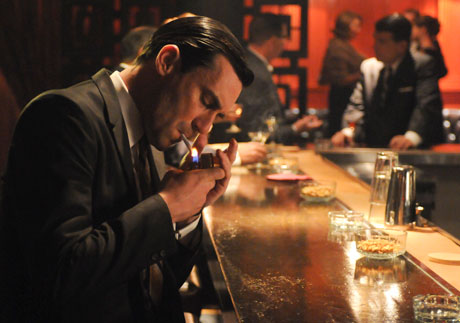 Other allusions to his impending dotage were not nearly so benign, including a terrifying peer down an empty elevator shaft. While this shot is open to interpretation, its foreshadowing of mortality is undeniable. Of course, as a severely wounded soldier, Don faced death in Korea as well. But that was the old Dick Whitman, the penniless whore’s son he abandoned in a blood-soaked ditch to become the dashing and successful Don Draper. Death just doesn’t happen to heroes of fairy tales, and Don’s momentary glimpse of the future seemed to shake him to the core. 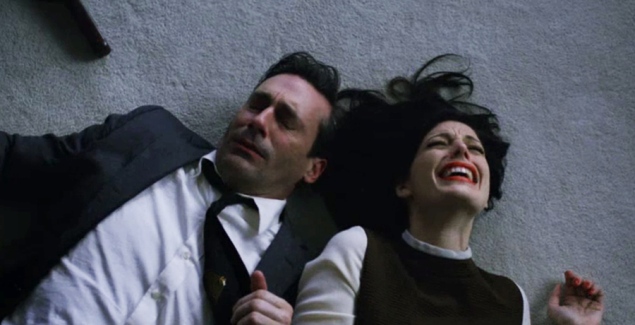 It also made him realize Megan’s ultimate shallowness, and the possibility that his new actress wife was approaching their marriage as a theatrical exercise. When Megan began to pursue her career in earnest, she shifted from a supportive executive's wife to a demanding, self-centered brat. Don’s final solution, inspired by a conversation with Peggy, has a double prong effect. It alleviates his guilt over the past and paves the way to his future freedom. One way to avoid the elevator shaft is to never settle down and grow old. 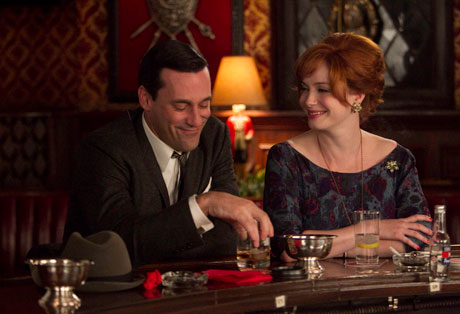 Season 5 is best remembered as a kaleidoscope rich with intriguing images and those extraordinary moments that make Mad Men the best show on television. Don and Joan, two veterans of romantic cynicism, rediscover their youthful innocence in a smokey bar. The vain former copywriter Kinsey is now singing the chants of Krishna; his shaven head shining like a cue ball. Don’s helpless panic at a Howard Johnson’s when he fears the worst for Megan. Lane’s cathartic and bloody thrashing of Pete Campbell at the height of his obnoxiousness. And possibly the most unsubtle yet perfect metaphor in the series’ history: while in Virginia to land a cigarette account, Peggy witnesses two stray dogs copulating in the parking lot of her motel. Mad Men Season 5 entertained, frustrated, enthralled, repulsed, befuddled and seduced us. And despite all the strange and new, fans were left in an old familiar place, desperately wanting more.