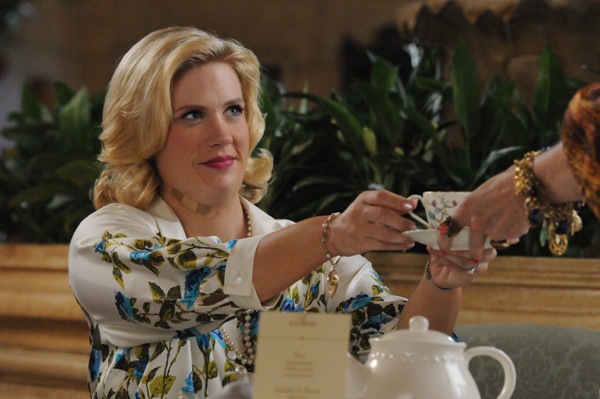 By mid season, the novelty of new faces had thoroughly tattered and shades from the past began to re-enter the proceedings. The tortured Betty Draper Francis continued to fascinate, although at times it seemed January Jones had tired of playing her. Maybe it was the extra weight from the fat suit, but this year’s conniving, pathetic Betty killed any desire viewers may have had for a reconciliation with Don. 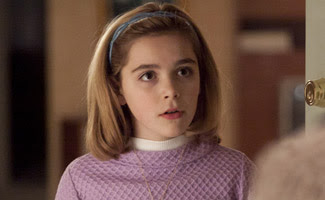 Sally Draper (Kieran Shipka) now 14 and bustin’ with hormones, has become the anti-Don; a spoiled child of privilege who channels her father’s work ethic and tenacity into extended melodramatic hissy fits. Whether through a gift for mimicry or superbly detailed direction, Shipka reproduced Don Draper’s facial tics and eye rolls with an uncanny accuracy. In a series teeming with illegitimate offspring, there’s no doubt about Sally’s provenance. Don and Betty have another child, a son named Bobby, but you wouldn’t know it from this season. Both he and Betty’s new husband, the beleaguered Henry Francis, were all but missing in action. 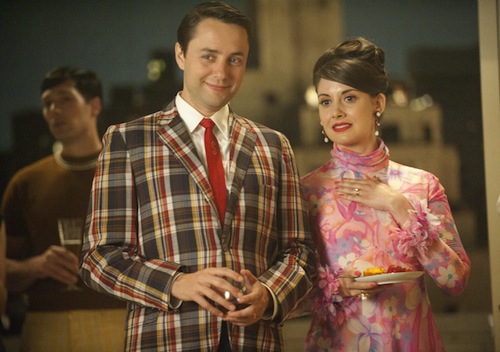 Speaking of bastards, Season 5 was devoid of any reference to Pete and Peggy’s secret bundle of joy. And Pete Campbell (Vincent Cartheiser) needed some comeupping as he basically used Don and Roger’s distractions to turn the agency into his own private fiefdom. Pete got away with it by delivering the goods, bringing in lots of new business while proving instrumental - though not in a good way - to the agency’s acquisition of the Jaguar account. Of course, Pete couldn’t just relax and be grateful for his success; he had to lord it over his superiors and virtually demand everyone kneel at his feet. The scales began to even when he initiated an affair after a chance meeting with a fellow commuter’s wife named Beth (Alexis Bledel). This lady turned Pete’s emotions - yes, he does have them - into an even more confused jumble, prompting Pete to suggest they run away to Los Angeles together during a moment of pillow talk. But Beth has some twisted proclivities, not to mention the possibility of becoming real trouble. In short, she’s the type of woman Pete deserves. He certainly doesn’t deserve his wife, the adorably steadfast Trudy (Alison Brie). It’s a good thing Ms. Brie has Community to fall back on; for second year in a row Mad Men gave her little to do. 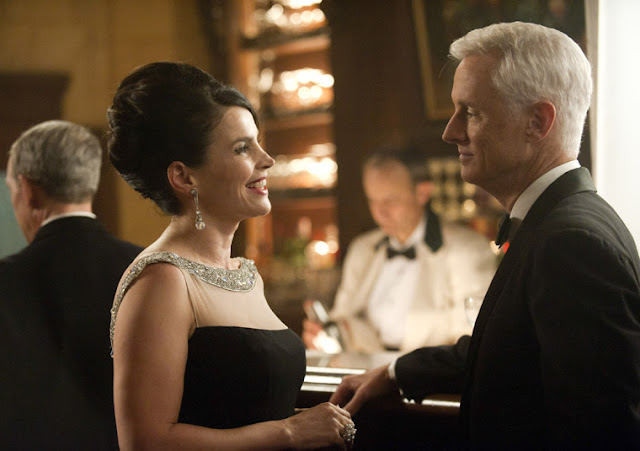 While Pete’s star rose at the agency, Roger’s fell further into eclipse. Stripped of cash cow Lucky Strike and his good ol’ boy Rolodex now filled with retirees, Roger (John Slattery) began a new career as corporate deadwood. But he didn’t go quietly and often engaged in humorous schemes to glom on to Pete’s new triumphs. Roger’s new leisure offered ample opportunity for narrative exploration. In one of the season’s best episodes, “Far Away Places”, Roger and his increasingly annoying wife Jane (Peyton List) drop acid with hilarious results. Their trip is shown without a single psychedelic visual cliche, instead the focus is on surreal occurrences and auditory hallucinations. The experience has a profound affect on Roger. In fact, one could easily imagine him running off to San Francisco for the Summer of Love. Not surprisingly, his hasty marriage to the shrewish Jane does not survive seeing God, and a passionate night with the exotic Marie puts the final nail in the nuptial coffin. This season Roger emerged as the show’s most dependable purveyor of comic relief; remaining witty and charming while his life turned into, for lack of a better word, shit. 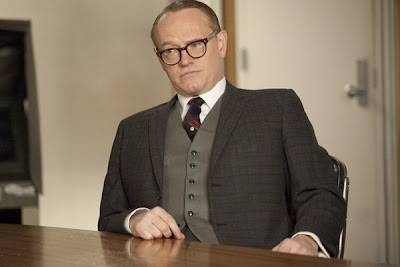 Meanwhile another partner, Lane Price (Jared Harris), found new and exciting ways to screw up his life as well, but with shockingly different results. Lacking the deep wells of history shared by the other principals, the show has never been quite sure what to do with this character. Lane’s emergence as a tragic figure undone by pride was believable, if a tad convenient. The Lane arc does provide key narrative motivation for Don's subsequent epiphanies, and it serves as yet another example of Mad Men’s endearing habit of subtly exposing hypocrisy. Don admonishes Lane for engaging in a deception not too dissimilar to his own. The irony is lost on Draper at the time, but eventually his guilt opens the door between the new man Don thinks he has become, and the old ghosts that linger in his soul. 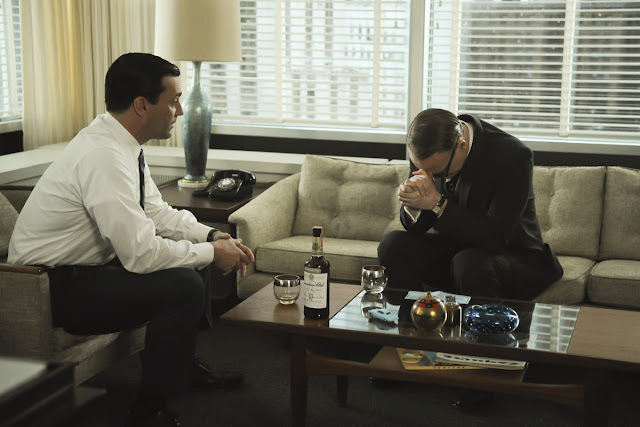