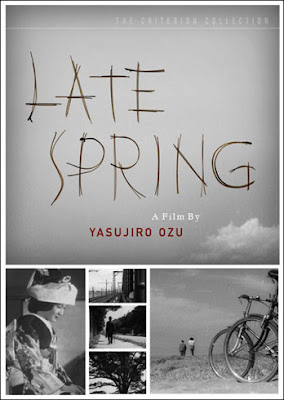 Societal customs and early forms of feminism collide in Late Spring, a masterfully delicate family drama from director Yasujirô Ozu. Produced in 1949, this seemingly modest film set in the exurbs of Tokyo spins a narrative web that slowly entrances and captures, leaving the hearts of unsuspecting viewers hopelessly tangled in its cinematic snares. Newly available on a sensory rich – albeit far from perfect – Criterion blu-ray, Late Spring approaches a home delivery platform worthy of its subtle characterizations and visual intricacies, and a suitable showcase for the full flower of Ozu’s meticulous realization. 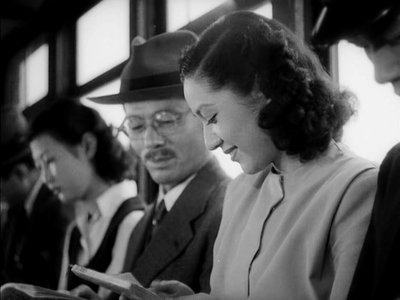 The story, like many other aspects of the film, appears rudimentarily simple at first glance. A 60-ish widowed economics professor named Shukichi (Chishû Ryû) lives quietly with his adult daughter Noriko (Setsuko Hara) in their traditional country home. Noriko attends to the housework and daily chores while her father entertains a steady stream of visiting family and former coworkers. However, late spring is not only a time of year but a time of life; a time Noriko, pushing 30, has squarely entered. Her biological clock is ticking loudly, audible to everyone except Noriko, who’s perfectly happy to remain at home washing her father’s shirts and cooking his meals. When meddling Aunt Massa (Haruko Sugimura) takes it on herself to find Noriko a suitable mate, a chain of events unfolds that slowly erodes the chemistry of this happy home. The weight of tradition becomes too much for Shukichi and Noriko, and soon they find themselves questioning the underpinnings of their lives. 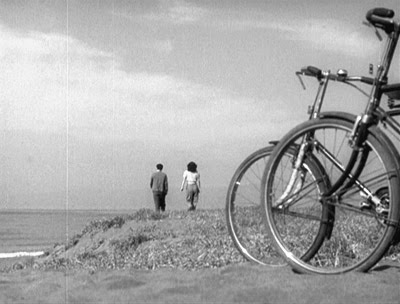 Despite its apparent simplicity, Late Spring is given significant heft by Ozu’s patented – and often copied – techniques of dramatic enhancement. An air of familiar domesticity is evoked through his constant insistence on underplay. Ozu’s actors deliver their lines in meek mutters, with toothy grins couching every word in respectful pleasantness. These trifling conversations, easily dismissed as chit-chat, loom large later in the film as society’s walls begin to close in on the principals. The sharpness and detail of the disc reveal Ozu’s passion for building three-dimensional depth in the frame, as each scene contains multiple foreground and background elements. Exteriors of trains, sand dunes and ocean waves are filmed in such a way to create maximum penetration along the Z axis, sending the viewer ever deeper into Late Spring’s unique world. While Ozu is famous for formalism, analysis of his frequent locked off medium close-ups shows an obsession with visual complexity held in perfect compositional balance; like a choir of a hundred voices blending in harmony. 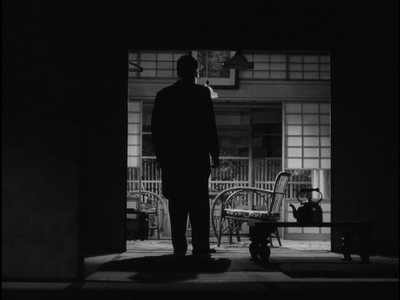 Both Chishû Ryû and Setsuko Hara would go on to long and successful careers in the Japanese film industry. Their work here is beyond reproach, creating one of cinema’s most convincing father/daughter dynamics. Ryû’s portrait of a world weary, easily manipulated senior is ultimately heartbreaking, while Hara – as of this writing still kicking at 92 years young – provides an infectious youthful zest that Ozu effectively exploits. Hara at times seems barely out of childhood; her trip into Tokyo for knitting needles rendered with a bubbly innocence that establishes her character more vividly than reams of dialogue could ever accomplish. But in the mind of Aunt Massa, and the whole of society, this vibrant young woman must not be left to her own happy devices. Hara proves to be the film’s driving energy; her performance starkly memorable and brimming with empathy. Even to the tradition-minded audiences of 1949, the sly efforts to force her into a preconceived notion of adulthood must have seemed vilely unjust.

I've been wanting to check out an Ozu film, is this the one to start with?

RH: This would fine. But I really recommend Tokyo Story. It's the first Ozu I saw and it hooked me. The story probably resonates better with contemporary life. It's all about elderly parents who visit their adult children expecting to be treated like kings but find the kids so wrapped up in their own lives they have no time for "honoring"
It's slow in parts but, like all Ozus, amazingly predictive of changes in generational attitudes.

Thanks for this review. Kurosawa is my favourite Japanese director, but Ozu is a great master too with wonderful films.