Domingo, Netrebko and Villazon: The Berlin Concert: Live From the Waldbühne (2006)***** 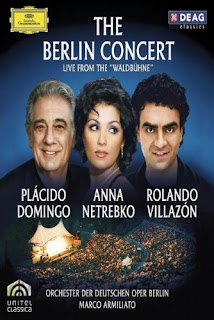 Studly young tenor Rolando Villazon joins superstar Anna Netrebko and the legendary Placido Domingo in this rousing concert filmed on a summer night in Berlin. Under the lively direction of young Marco Armiliato, the singers, along with the Berlin Deutsche Oper Orchestra, perform a wide open program ranging from opera standards to Broadway show tunes. 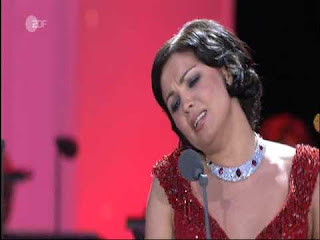 O mio bambino is dispensed with early in the proceedings, and Netrebko nails it with her characteristic effortlessness. No diva has ever made such difficult singing look more natural and carefree. She pairs with Domingo for an extraordinary duet from Othello; a performance that may have you immediately reaching for the repeat button. Villazon’s solo pieces are well chosen to show off his impressive sonic range and intensity, and he joins his frequent production co-star Netrebko in a version of Tonight from West Side Story that will leave you breathless. 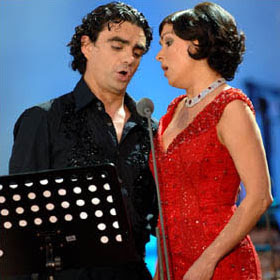 The best is saved for last, as each of the singers return for a solo encore. Particularly impressive is Domingo’s rendering of No puede ser by Sorozabal, in which the veteran tenor proves that he can still tap enormous reserves of dramatic power. In the program’s finale, all three singers return to the stage, champagne glasses in hand, for the second Lehar piece of the evening, the joyously romantic My Heart is Yours, which caused this reviewer to break out in a serious case of goosebumps. 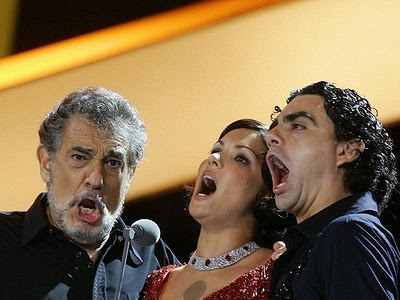 And, according to their ecstatic reaction, so did the 20,000 in attendance. The sound quality of the recording is absolutely first-rate, the only flaw being a couple of brief moments when the singers wander off mike a bit, but that is a minor quibble. Especially striking is the recording of the woodwinds, as the delicate sounds of these instruments cut through with punch and vibrancy. In all, a night of beautiful music in an equally beautiful setting, and a performance no fan of classical singing will want to miss.
at January 07, 2011

Thanks. I thought a little break form the wintertime blues would be nice. That's Mr. and Mrs. Ceylan from "Climates"